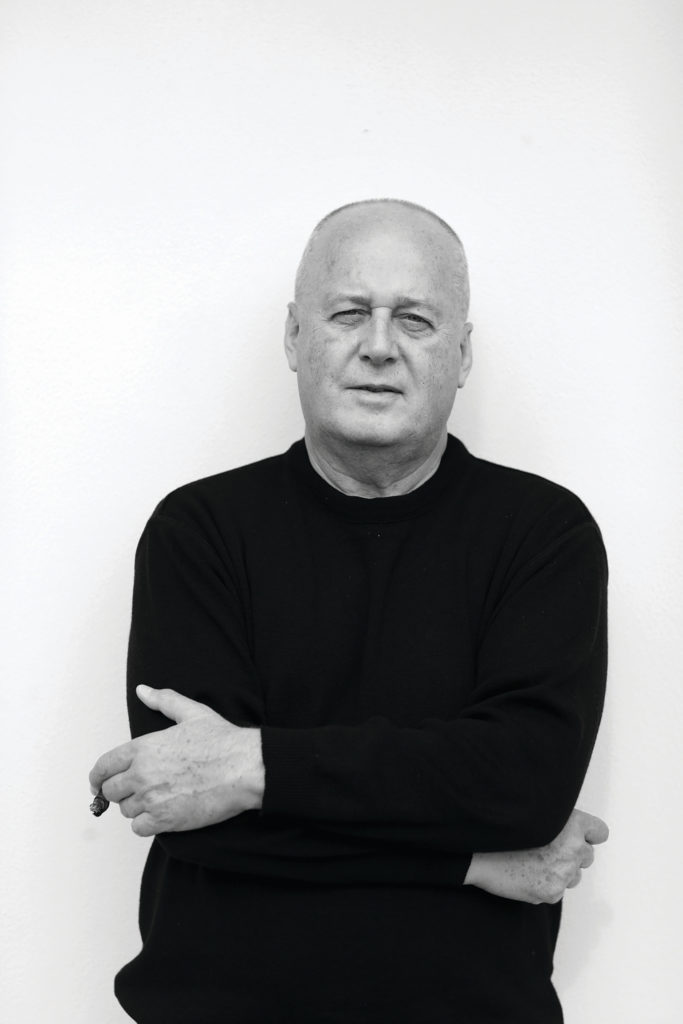 Alberto Alessi Adds to His Legacy

Alberto Alessi, who helms the eponymous Italian homewares mainstay, dishes on David Chipperfield and how a collaborative ethos continues to satiate the brand’s restless spirit.

Alberto Alessi, who helms the eponymous Italian homewares mainstay, dishes on David Chipperfield and how a collaborative ethos continues to satiate the brand’s restless spirit.

“I knew my destiny from the beginning,” says Alberto Alessi, grandson of Giovanni Alessi. From a two-tone tea kettle that whistles in harmony with the iconic Moka pot—the stove-top coffee maker that has become a fixture in kitchens throughout Italy and beyond—Alessi has brought well-designed objects into the home since 1921. It wasn’t until Alberto took over in 1970, however, that the Italian manufacturer dedicated its focus to collaborating with architects and designers around the globe.

“I came to understand that the atmosphere of the factory was a bit too gray, a bit too boring—the people were just plain bored of doing the same thing,” says Alessi, who today fills the role of president, head of marketing strategy, and communication and design management at Alessi. “So, I thought, how can I add some fun to this factory?”

Ettore Sottsass was one of the first architects Alberto solicited, and his crystal-and-mirror polished-steel 5070 condiment set, released in 1978, has its seat at the table firmly established. Complete with vessels for salt, pepper, and toothpicks, it’s still in production. Likewise, Kettle 9091, the aforementioned polished stainless-steel whistling kettle designed in 1983 by Richard Sapper, is a cult classic. “We had some designers, but very few, and they weren’t as inspired, or as good—if I may say—as the ones I started working with,” he reveals.

At Salone del Mobile this past April, Alessi introduced a new Moka pot by architect David Chipperfield, who also designed the accompanying exhibition at the Museo delle Culture di Milano (Mudec), which toasts the Alessi legacy. Chipperfield has big coffee maker shoes to fill. Since Alessi first introduced the Moka, in 1930 (the Moka Express by Alfonso Bialetti), iterations have come from the likes of Michael Graves, Piero Lissoni, and Michele De Lucchi.

Perhaps that explains why Graves chose to keep the archetype of the familiar Moka unchanged, instead of introducing, with a grand flourish, an entirely new design. When it comes to daily routines, we gravitate toward the familiar. In Milan, Alberto sat down with Surface to reveal more about the new design, titled, with the utmost simplicity, Moka.

Why a coffee pot?

Coffee is very much central to Italian culture. When we think of housewares, we immediately go to the coffee maker. They’re very deeply linked. Of the three best-selling Alessi products, two are coffee makers—the 9090 and the Pulcina.

How is Moka different than your previous coffee makers?

The main difference is the design process. Alessi is known for having designed and produced several different Mokas by some of the most interesting designers and architects of their period. But they were all “author” projects—each designer put in his own aesthetic. Aldo Rossi channeled his world into the coffee maker, as did Michael Graves.

David’s reaction was different—he preferred to work on the archetype’s evolution. I accepted that because I felt it was one of the possible developments in design theory in itself. Maybe it’s true that today you have too many aesthetics for what are, in the end, humble products. Maybe we are exaggerating in general.

And the physical differences?

Working on the archetype is very difficult. You must use a very light hand. The original is octagonal, and this one, also in aluminum, has eleven sides. Instead of a center knob, there’s one on the side, which means you can operate it with only one hand. From a functional point of view, the handle is perhaps the most important difference. In terms of distance, it’s higher, so you don’t risk burning your fingers. It’s also thicker and much more solid compared to the original.

I tend to melt my handles off.

This handle is high enough to not melt unless you use a really strong gas flame. Also, it was conceived in a very resistant plastic. The original Moka, while splendid, was designed in a way that, at a certain point in its life, the handle breaks. Inside, the rubber sealant—for those who leave the coffee maker on the stove—is also designed to resist.

How did you and David connect?

We started working with David at the end of the 1990s, when Alessi launched a design research program organized and managed by Alessandro Mendini, who was my art director. The idea was Italian design is coming from architecture. It’s very clear—all good design in history was done by architects. Sometimes they only did industrial design, but they were trained as architects. We periodically organized research projects to find out who, among existing architects around 40 to 50 years old, was also able to do exceptional industrial design.

In this case, we invited 23 architects from around the world. We asked each for a tea-and-coffee set, to be made by hand, in silver, in limited production. We wanted to see if there was someone more interesting for real industrial projects. David went on to design a collection of table porcelain and cutlery for us. They were very good projects, very successful.

How do you choose your next product?

When I believe in a new designer, I propose ideas from our side—for example, a coffee maker. I also make sure they know they’re free to call me with ideas from their side. It’s like having another set of eyes looking through the Alessi catalogue. Sometimes our own eyes don’t see what’s missing. It has happened many times that ideas proposed spontaneously by the designers were good.

Why do you think people will still choose a Moka?

Some people enjoy this very personal, hand-made, early-morning process of making your own coffee. You wait until you hear the blub-blub-blub of the coffee… something anthropologically imprinted into the collective memory of Italians. This market of people will continue to like the Moka. Maybe they’ll also have the capsule coffee maker. Why not? Of course, capsule coffee has recently become very important. But that’s another story. For public spaces or offices, the capsule is much easier. Even in our office we don’t use the Moka. I don’t really see the two competing.

Which coffee-maker do you use at home?

I have all of them, so it depends on my mood. When I wake up and need inspiration, I usually use one by Aldo Rossi. When I need to be more calm, I go for Richard Sapper, which is a little bit more minimal. Of course, I’ve been using David’s Moka for a few days now.

Was there anything particularly difficult about the design process?

We had to accept that the one-cup, three-cup, and six-cup Moka will not function on an induction [range]—just gas. The diameter is too small. We have a larger size, the nine-cup, which will work on an induction stovetop, launching in September.

Is there someone that you would have liked to work with on a coffee maker?

Perhaps the most interesting to me would have been Umberto Eco, the Italian novelist, semiologist, and philosopher who died a few years ago. He was a very interesting person. Discussing the semiotics behind the coffee maker could have been another challenge.

This Weekend, Let Artist Anne Imhof Push All Your Buttons