The city’s dynamic architectural past is fueling its transformation.

The city’s dynamic architectural past is fueling its transformation.

Buffalo natives expect cliché assumptions about where we’re from. It’s bitterly cold and snows a lot. The sports teams suck and the diehard fan base sets the gold standard for drunken foolery. And then, of course, there’s the chicken wings. Spoiler alert: The stereotypes are all true, but there’s also something unexpected happening in Buffalo.

A few years ago, I told the executive director of the Architectural League of New York, Rosalie Genevro, that I grew up there, and without missing a beat she launched into enthusiastic praise of the city’s buildings. In fact, it’s the only American city besides Chicago that boasts buildings from the trinity of great American architects: Frank Lloyd Wright, Louis Sullivan, and Henry Hobson Richardson. Still, we forgive outsiders for not knowing that. The city’s thriving steel and grain industries and its location on the Erie Canal made Buffalo a capital of commerce during the 1800s and into first half of the 20th century, but an economic downturn in the 1950s sent the former boomtown into a sustained decline. For decades, many of the brightest architectural emblems of its heyday went unused, their fate hotly debated but left undetermined. That is, until now. The city is starting to write its own urban-renewal story, not unlike those of its Rust Belt compatriots, Detroit and Pittsburgh. With a slew of major restorations, adaptive reuse projects, and big-budget expansions reigniting enthusiasm,  a cultural renaissance is finally taking shape.

Buffalo’s new life has come from both natives and international talent seeing the metropolis with fresh eyes. Take, for example, the project to expand and enhance the Albright-Knox Art Gallery, called AK360. The Beaux-Arts-style building on Hoyt Lake in the sprawling Frederick Law Olmsted–designed Delaware Park houses an impressive collection of fine art (Pollock, Cézanne, Matisse, and Picasso among it). The revamp’s $120 million price tag is the highest for any cultural institution in the region’s history. $100 million of the budget was raised quickly—in just under three months—thanks in part to the efforts of a native Buffalonian entrepreneur Jeffrey Gundlach, who grew up visiting the museum and now lives in Los Angeles. (He donated $42.5 million of his own money to the project.) And, in a throwback to Buffalo’s architectural zenith, the expansion is being led by a big-name designer. “It’s so exciting for us because the potential is so high, ” says Shohei Shigematsu, partner at architecture firm OMA and design lead on the project. Due for completion in 2021, the plans include new gallery space, renovations to existing buildings, and a rethinking of the institution’s relationship to its surrounding green space.

As for the city itself, Shigematsu sees potential there, too. “It’s almost natural, as an architect, that Buffalo is one of the cities to visit, but I was surprised when we did some digging on its demographics and [discovered] it’s the third-largest destination for millennials to move to on the East Coast,” he says. “People are very committed to making the situation better. It’s one of those cities that is creating momentum.”

It’s not just residents propelling change. New York–based artist Shantell Martin, known for her black-and-white free-form works, has unveiled a permanent public mural on the city’s east side. (She also has a solo show called “Someday We Can” at the Albright-Knox, through June 25.) “There’s a lot of young, creative people making art here,” she says. “There’s more going on than you’d think.” The drawing’s location was determined after canvassing her class at the University at Buffalo, where she was a resident for its Creative Arts Initiative.

Not far west lies another emblem of Buffalo’s renewal, inside an erstwhile state hospital. Two Romanesque Revival–style towers, with crowns patinated blue-green, reach upward from a colossal 145-year-old complex. This Designated National Historic Landmark, designed by H.H. Richardson and constructed in the 1870s, sat vacant for the majority of my lifetime, despite its conspicuous presence in the trendy Elmwood Village neighborhood. When it was announced in 2014 that it would become Hotel Henry, an 88-room hotel, restaurant, and architectural center, it felt validating, like we’d received an acceptance letter welcoming us into an elite group of cities with socially charged boutique hotels. “What’s amazing to me is how invested people are in Buffalo,” says Stephen Brockman, senior principal at Deborah Berke Partners, who joined forces with local firm Flynn Battaglia Architects on the project. “In the early stages, we did community meetings, and it filled an auditorium. I knew then that it was more than just a beautiful piece of architecture: There’s a monumental attachment to it.” 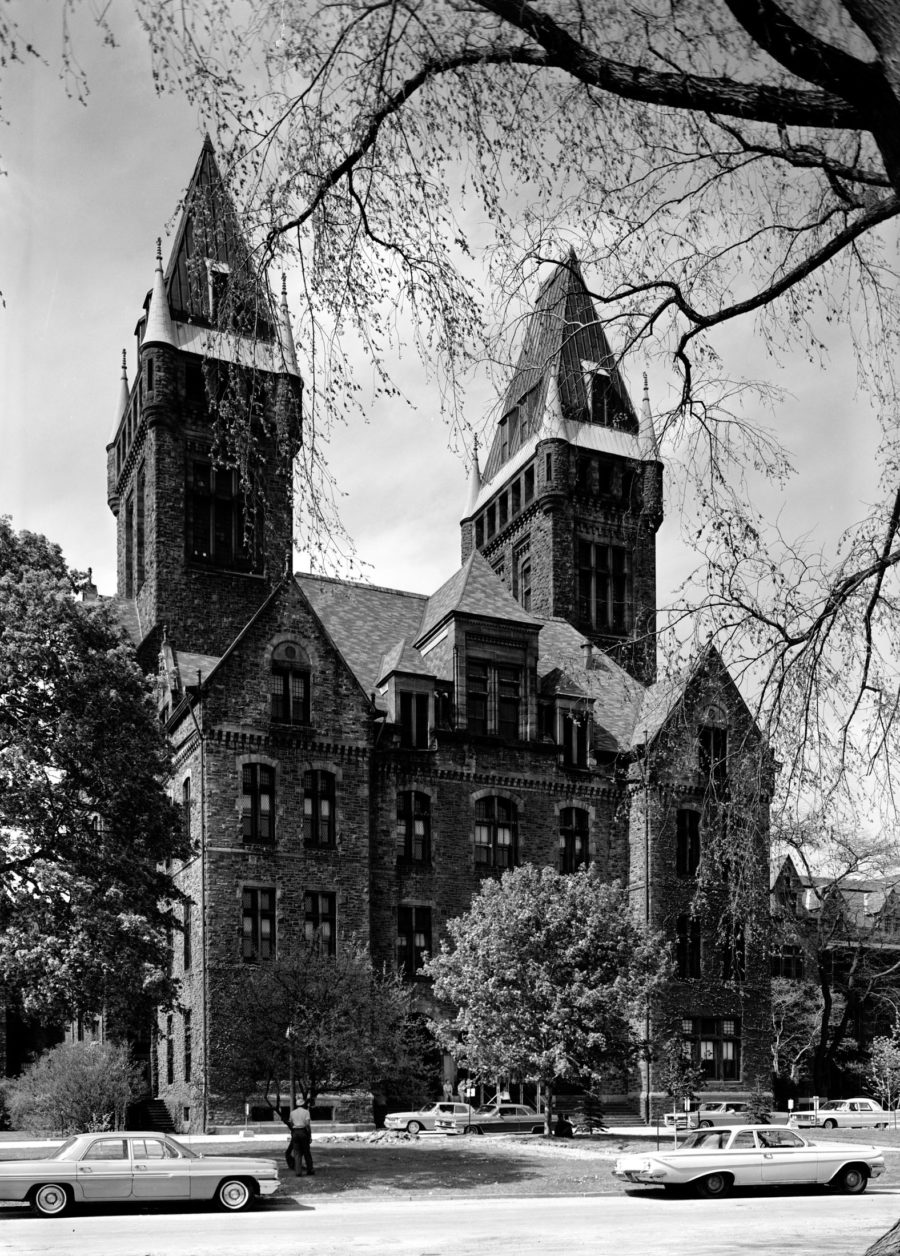 The imperative handed down to Brockman and his team was to usher the monolithic structure into a new era without altering its structure and historical integrity. The building once served as the headquarters for the Buffalo State Asylum, a forward-thinking facility for its day that focused on light therapy and air circulation as pillars of healing. Traces of the philosophy remain, such as the large windows in the rooms that let sunlight pour in and look out onto Olmsted-designed grounds—or the wide corridors that project a feeling of grandeur, and the extra room for social spaces. “We weren’t going to change the architecture that greatly,” Brockman says, “but we wanted to provide a way to see the  building in a new way.”

Growing up, I remember local talking heads debating what to do with the many vacant structures, whose only purpose, it seemed, was to remind us just how far our dear city had fallen. The most glaring example of these can be found just beyond downtown, where a series of of mostly dormant silos encroaches on the Buffalo River. The concrete structures drew the attention of many over the years, including students of the Bauhaus and Le Corbusier, who visited the site and wrote about their pragmatic design in the 1920s. But as remnants of a booming grain-and-malt trade that ebbed and flowed from the 1850s to the 1950s, some residents considered them stains on the city with no place in 21st-century Buffalo.

Then, in 2006, local businessman Rick Smith bought a group of the silos to use as an ethanol plant. When the plan was deemed unworkable, he and his friend “Swannie Jim” Watkins turned it into an events hub. They hosted a reception for the National Preservation Trust, then the Boom Days festival, which celebrates the annual removal of the ice boom—a flotilla of steel tanks that keep ice from lake Erie from jamming the city’s rivers—and the arrival of spring. (Some clichés exist for a reason. The winters are cold.) Now the silos, with their impeccable natural acoustics, play host to monthly summer poetry readings, classical music concerts, and art installations.

“It’s been organic and chaotic growth,” Swannie Jim, clad in flannel and denim, says to me one afternoon in April. Swannie manages the property and lives in a shedlike building on site with his pitbull. Silo City, as the area has been rechristened, remains as gritty as ever: Graffiti from years of abandonment remain on the inner walls, puddles of rainwater gather on the concrete floors, and a broken-down boat lolls in the river nearby. But now that’s considered all part of the appeal. “We’re going to keep this urban,” he says. “You have to keep some of that spirit.” Elsewhere, another silo has been retrofitted as a brewery—as sure a sign of urban transformation as any.

Nearby, the Connecting Terminal Elevator has also transformed into an experiment with public art in a formerly dilapidated space. At night, the concrete exteriors are illuminated by light projections emanating from downtown. One of the best places to take it in from is Canalside, a portion of waterfront that has an impressive before-and-after appeal. My mother, who grew up on the East Side, likes to inform out-of-towners that the area, on Lake Erie, was a vacant lot for most of her lifetime. Now, the district’s Central Wharf plays host to the throngs who come for  live music in the summer, and ice skating in the winter.

Some of the city’s recent transformations have advanced at a lightning pace, while others have been prolonged. Situated in northern Buffalo, Frank Lloyd Wright’s Darwin D. Martin House is in a class of its own. Built for the eponymous local businessman and his family between 1903 and 1909, three of its five buildings were demolished in the 1960s. The painstaking restoration of the famed architect’s first commission outside of Chicago will near completion this year, two decades after efforts first began. (A Toshiko Mori–designed welcome center was added in 2009.) In many ways, the project became a beacon of hope for the city when the future looked grim, its steady success serving as a  blueprint for what has now become a trend.

“It made people say, ‘We can do these projects,’” says executive director Mary Roberts, who started as a volunteer in 1996. “Buffalo is in a renaissance that’s based on heritage.” For Roberts, the recent development across the city answers the question posed by an old cartoon she remembers from the Buffalo News: “If you build it, will they come?” Sure enough, after a decades-long crisis of confidence, Buffalo is seeing a significant uptick in tourists and new residents, with the most investment—more than $1 billion in recent years—since its heyday. And the city hardly needed to build anything new. What Buffalo required to bounce back was there all along.

How Dead Malls Are Getting a New Lease on Life