As its final phase opens, all eyes are on the city’s Riverwalk.

BY Heidi Mitchell
PHOTOS BY Lucy Hewett February 20, 2017
Share
Back

The Chicago I know is the one defined by its river. Before my family relocated to this city last fall, I’d only been here on business—in and out. So, like any good transplant to the Third Coast, my first clichéd impulse was to board one of the tour boats that ply the Chicago River. I soaked up the history as an aged docent spun tales of the girls who used to fulfill orders in the massive Montgomery Ward Complex, zipping around on roller skates. Once we had disembarked, my kids played in a riverside pumpkin patch while a friend and I downed cocktails at Island Party Hut, a tiki lounge in an adjacent patio. Then we rented bikes from Wheel Fun and traced the waterway to Navy Pier.

It wasn’t so long ago that the green-hued river was an eyesore. At the turn of the 20th century, its flow had to be reversed to prevent sewage from contaminating the city’s drinking water. Buildings were erected with their backs turned toward it, like the Civic Opera, an art deco behemoth built in 1929, whose auditorium and the 45 stories above it have not a single window looking onto the water. The towering Gothic Revival headquarters of the Chicago Tribune—one of the most famous buildings in the Midwest—were built in a way that allowed publishing executives to avert their eyes from its murk. The opening of Millennium and Maggie Daley Parks, in 2004 and 2014, respectively, brought more green spaces to the shores of Lake Michigan, Chi-town’s preferred body of water. One of the only reasons anyone went down the steps on Upper Wacker Drive to the river was to catch one of those tour boats.

Chicago architect and city planner Daniel Burnham thought a lot about the river when devising his 1909 redevelopment scheme for the city. It included docks at the mouth of the river and traffic circulation around the confluence near Michigan Avenue. Much of the Burnham Plan was scrapped during the Depression, but environmentalists picked up the baton in 1979, forming Friends of the Chicago River. It wasn’t until 2001, however, that developers and city planners decided that rehabbing the river was not only viable, but profitable. The Metropolitan Planning Council hired architect Carol Ross Barney to work on a report called “Our Great Rivers” to prove the point. “Chicago has about 150 miles of river, and there is a lot of land along it,” says Ross Barney, who also headed the original Riverwalk design. “The Riverwalk was a visible attempt to put the river back at the heart of the city. It will be one of the assets that makes Chicago more livable.”

Developing the Riverwalk was a slow process and wrapped in bureaucratic red tape. The Chicago Department of Transportation engaged the Army Corps of Engineers, landscape architects, aquatic engineers, lighting designers, and a raft of other experts. The city came up with a plan to fund the section from Michigan Avenue to the Wabash under-bridge, “and extend it as much as funding would allow,” says Michelle Woods, project manager at the Department of Fleet and Facility Management. After running into a financial wall, they enacted the “open space impact fee,” requiring developers to provide an easement on any new project along the river or else pay a fine. Mayor Rahm Emanuel took the river on as a pet project and appealed to secretary of transportation Ray LaHood, and the federal government granted Chicago a Transportation Infrastructure Financing and Innovating Act (TIFIA) loan of nearly $100 million, to be paid back in 35 years by revenue generated solely from the project itself.

With that money, the city hired Boston architecture firm Sasaki Associates to work with Ross Barney to dream up the balance of the audacious project. Sasaki was charged with two goals: “to get people as close as possible to the river along wide, continuous boulevards, and to offer variety on each block,” says lead designer Gina Ford. Mayor Emanuel saw the conceptual plans and understood the appeal to the young workforce who might consider moving to a reimagined downtown. “Now you go under one bridge and you don’t know what to expect,” Woods says. “Each block has its own identity.” 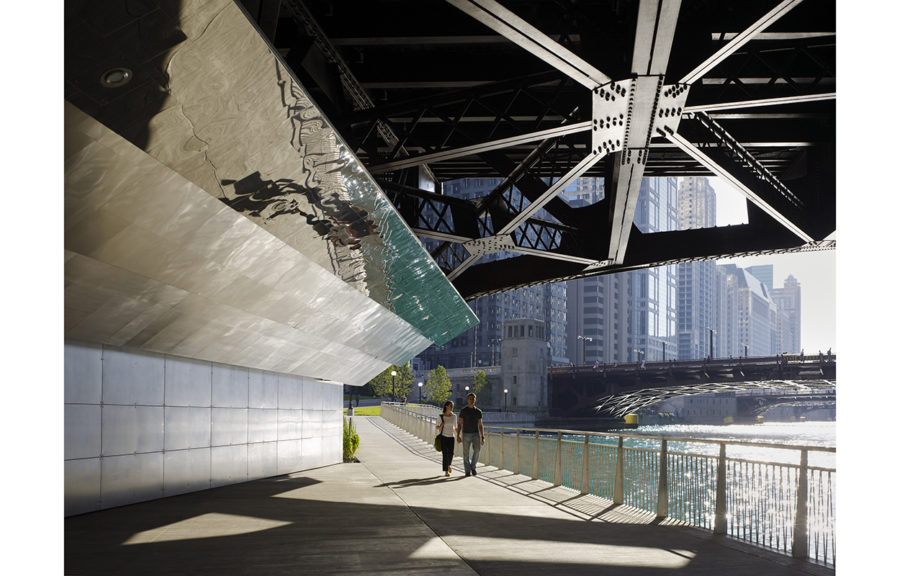 3
Slideshow
Scenes at the Riverwalk
…

There’s the Marina, where City Winery has become a warm-weather rendezvous spot. Then there’s the Cove, where kayakers and paddleboarders can power themselves up or downstream. Next is the River Theater, an amphitheater for outdoor concerts, followed by the popular Water Plaza, where kids play whack-a-mole with the fountains. At the fifth block is the Jetty, a floating wetland garden—something that hasn’t been done anywhere else. “That was about storytelling and reconnecting people to the ecology of the river,” Ford says. She calls her firm’s six-block concept Rooms, since they are discrete spaces, much like you’d find in a house.

Chicagoans live for summer, and somehow repress the reality of winter. I can’t help but laugh at the countless balconies, terraces, and outdoor pools dotting downtown as I walk by in my Canada Goose. So while I’m just now learning the true meaning of the “Lake Effect,” joggers still brave the subzero temperatures down on the river at dawn. The tiki lounge where I had autumnal cocktails had been transformed into a Christmas tree market for the holidays. Tourists and new arrivals like me bundle up and stroll along the water, staring up at the canyon of buildings that seemed to defy gravity when they were erected in the middle of the last century. Beneath the surface, the river is on the mend, no longer a nightmarish ooze of pathogens: In 1972, a census counted just seven species of fish; now there are 75.

The Riverwalk has been a raging success; its final phase opened in October, though there are a couple of conspicuous missteps. The project flooded just after its first section was opened, and it will surely happen again. The Trump International Hotel, designed by Adrian Smith, sparkles on a clear day as it pierces the sky 92 stories up, but down at the waterfront level, 70,000 square feet of retail spaces stands empty. In a filing with the Cook County Assessor, lawyers for the Trump Organization stated that “there is no market for retail space that has no direct access to major foot or car traffic.” The glass windows have been bare since the hotel debuted in 2008; once the Foster + Partners-designed Apple store at the water’s edge opens up, the thinking goes, retailers will be more interested in the building.

There’s plenty still on the way to keep the excitement revving. Architectural firm Perkins + Will have just broken ground on a $1.5 billion riverfront community called Riverline, a 15-acre city-within-a-city that will feature multiuse buildings, parking, around 3,600 housing units, and 5.8 acres of parkland. “To create a sense of place for people to entice them to move there, we are building the public space first and establishing a beachhead,” says Ralph Johnson of P+W. “Twenty years ago you couldn’t do this, since there wasn’t the density of population,” says Johnson’s colleague Todd Snapp of the project, which includes half a mile of the Riverwalk. “Now the river isn’t just a pass-though, it’s activated. We imagine a food truck rally or movies in the park, and green roofs all programmed for public use. We are basically creating a neighborhood on what was an unofficial campground and dog park.” Nearby, Related Midwest (whose president, Curt R. Bailey, is the cousin of Surface’s Editor-in-Chief) is in the early stages of a 15-year overhaul of a 62-acre waterfront site. Like every other new development, it must (and will) have open space for pedestrians, keeping the Riverwalk’s existing 13-plus miles of trails fully accessible and contiguous.

Because the path is made up largely of land carried in by barge, anyone with an idea is challenged to be creative. Perkins + Will are testing the viability of an 80-story all-timber high-rise on the river called River Beech Tower. Entrepreneur James Chuck of waterfront restoration firm Second Shore has drawn up plans for Riverride, yet another portmanteau-named project that would use floating pontoon segments to connect parks and pathways for cycling. The Active Transportation Alliance just published a report proposing ways to create a bike and pedestrian trail by 2030 that would snake along the entire 27-mile riverfront. By then, if Friends of the Chicago River meet their deadline, the Chicago will be a swimmable waterway (giant Asian carp be damned).

I’m not sure I’ll ever swim in the river, but my kids and I will be kayaking there this spring. I saw a bunny on the bank the other day. Others have spotted muskrats, coyotes, red foxes, and blue herons. One day soon, maybe everyone will only know the Chicago I know, the one where you can bike and drink rum punch along miles of river, and never once consider turning your back.