“People should remember that architecture is also a service industry—as humble as that might sound, people need things designed and figured out, sometimes more than a big concept.”

Claude Debussy once said, “music is the space between the notes,” suggesting that silence defines a composition as much as sound. It’s a notion that describes architect Neil Logan’s approach to design perfectly.

For Logan, a finished space is often relatively empty. Impressive wood floors aren’t covered with excessive carpeting or furniture—they’re unapologetically exposed. He is not a fan of attention-grabbing pieces, either. He dedicates his practice to the familiar, the well-known, the perfectly creased couches we’ve already sat on. What he designs are backgrounds, spare spaces containing pleasantly simple pieces and stunning wood finishes. It’s up to the room’s inhabitants to finish the composition.

After studying architecture at RISD and Columbia, Logan worked for Toshiko Mori, Philippe Starck, and others before establishing his namesake firm in 1992. Over the next 27 years, it collected an extensive portfolio of ground-up projects and renovations, all of them recognizable by a modest approach and a sophisticated impact. Even Logan’s furniture is distinctively unfussy—function is never concealed, but openly celebrated.

And there’s nothing imposing in what Logan does. From a luminous artist studio in Sag Harbor to the industrial finishes of Brooklyn’s Supreme store, Logan works to reveal the essence of a space, to find completeness in a building’s infrastructure. He’s not there to crowd a room, but to help its occupants find and enjoy the space between the notes.

I’m wondering, is there anything in your upbringing that influenced the way you think about design?

I have a bit of a strange background, because I’m sort of an ex-patriot if you will. I didn’t go to high school in America, I lived in Paris from when I was eight years old to eighteen—that makes kind of an unusual background for a person who’s an American architect.

So when did you realize you wanted to become an architect?

I realized that after my first year of college. I actually entered an architecture program, just kind of arbitrarily, and I wasn’t sure if I liked it and as I went into it further, I realized I did like it.

Where was that program?

The first place I went to was the Illinois Institute of Technology, which was a school that was taken over by Mies van der Rohe. But I only studied there for one year, and then I transferred to RISD and went there for four years. Then I worked in the city for some time, got my architecture license, and then I went back to graduate school at Columbia.

What led to establishing your firm in 1992?

At that point I had worked for several people—Toshiko Mori, and Edward Barnes. Later I worked for French designers Philippe Starck and Andrée Putman. Then, I took the leap to work on my own— first very modest projects, but then slowly, things started to come together—but [my studio is] still very small, not a big office. I had worked in smaller offices, and I preferred that to larger offices. 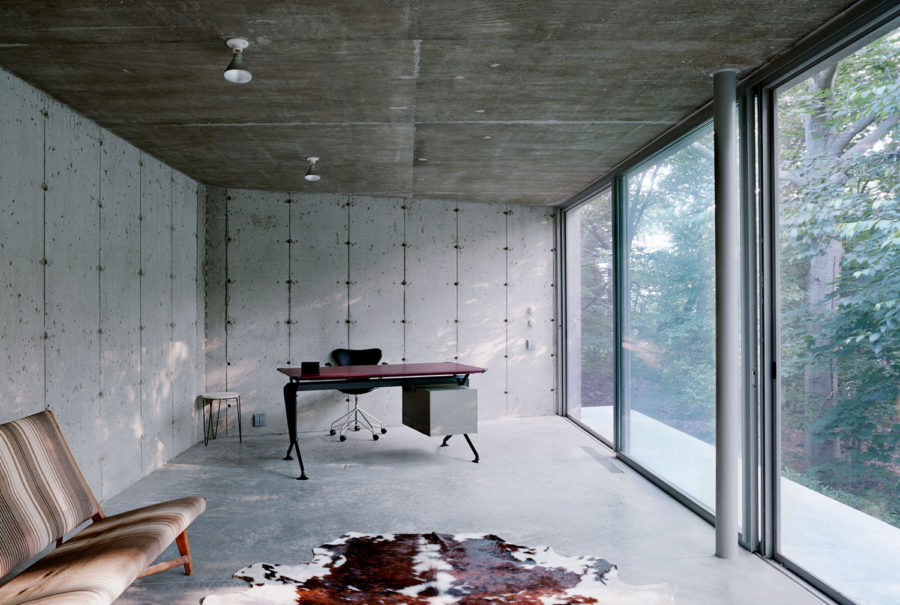 You used to buy a lot of classic furniture pieces through some vintage dealers in Denmark—did that inspire your own designs?

Yes, you could say I took an interest. I spent a lot of time there, made some new contacts, and learned about furniture. Denmark is one of the few places where they still have crafts such as caning, leather work—it has a strong tradition [of combining] craft with modern aesthetics.

How did you get into furniture design?

I think because in New York you’re doing lots of interiors, it becomes a kind of natural place to work on furniture because that’s the scale of the projects. Also, since renovations are often in older buildings, there’s a will to make a distinction between what was existing and the new construction, which is often inserted into
these older places.

What advice would you have for young architects today?

I would say that when architects go to school they have big illusions that they’re going to change the world and make some masterpieces, and sometimes that might not be possible. In a way, people should remember that architecture is also a service industry, as humble as that might sound, people need things designed and figured out, sometimes more than a big concept.

And your design philosophy?

I aim to make something that’s not appearing to be overly designed and seems appropriate for the use, place, and the mood. That’s not an easy task to make things look like they’re not noticeable.

What would your dream project be?

Any project can become a dream project… it depends on how it goes.

Neil Logan, Architect is a member of The List, the destination for all things Surface-approved. Want to join The List? Contact our team to find out how to apply.

Designer of the Day: Nazara Lázaro

Designer of the Day: Cody Hoyt

Designer of the Day: Paul Chan

What A/D/O’s Closure Means for the New York Design...

The Blonds Star on Broadway for New York Fashion Week