For anyone wondering how the post-pandemic return to physical events is going, one key statistic behind Art Basel’s tentpole Swiss edition speaks volumes. The fair enjoyed 290 exhibitors in 2019, one year before Covid-19 paused in-person events and launched a deluge of virtual viewing rooms to much art-world umbrage. While the fair returned in 2021 with a pared-down edition hampered by travel restrictions and coronavirus safety precautions, it returned in full force this year with 289 exhibitors—just one shy of its 2019 peak.

The enthusiasm rippled throughout the fair’s crowded halls, which attracted 70,000 attendees and buzzed with advisers and collectors facilitating major sales despite a recent market downturn. Though collectors from China were scarce this year due to the country’s ongoing travel restrictions, sales quickly took off. Within the first six hours of the VIP opening, New York dealer Sean Kelly made more than 20 sales valued up to $250,000. Hauser & Wirth reportedly sold more than $75 million on the first day, including the $40 million Spider (1996) by Louise Bourgeois that loomed over the gallery’s booth. The first-time exhibitor Mariane Ibrahim, a much-watched Chicago and Paris–based dealer who champions artists from the African diaspora, rehung its booth multiple times to accommodate soaring demand.

The fair’s Unlimited section, curated by Kunst Halle Sankt Gallen director Giovanni Carmine, presented 70 large-scale installations perfectly suited for the Instagram-friendly crowd. Of note was a monumental sculpture that rising star Kennedy Yanko fashioned from a mangled shipping container. Theaster Gates, an artist deeply committed to preserving the neglected cultural histories of Chicago’s South Side, memorialized a local hardware store by recasting its wares as artistic material on a 28-foot-wide canvas. Leonardo Drew’s first monumental work in Europe, a giant burst of weathered wood scraps, captured the energy of a Jackson Pollock painting. Kicking things off was an event with Grammy winner Chance the Rapper, who released a new music video featuring the work of artist Yannis Davy Guibinga.

Despite the intense focus on NFTs at the Miami fair in December, crypto’s footprint was noticeably smaller in Basel. That may be a consequence of its tanking boom-bust market—Bitcoin and Ethereum, the cryptocurrency most associated with NFTs, have both plummeted 70 percent since April. One standout came from Tezos, which featured works by 95-year-old generative artist Herbert W. Franke paired with younger talents Aleksandra Jovanic, Sam Tsao, and Ryan Bell. Nothing in the booth was for sale, but it offered a crash course on the history and recent renaissance of new media art. Visitors could also co-create generative artworks that Tezos minted as NFTs on its blockchain in real time. 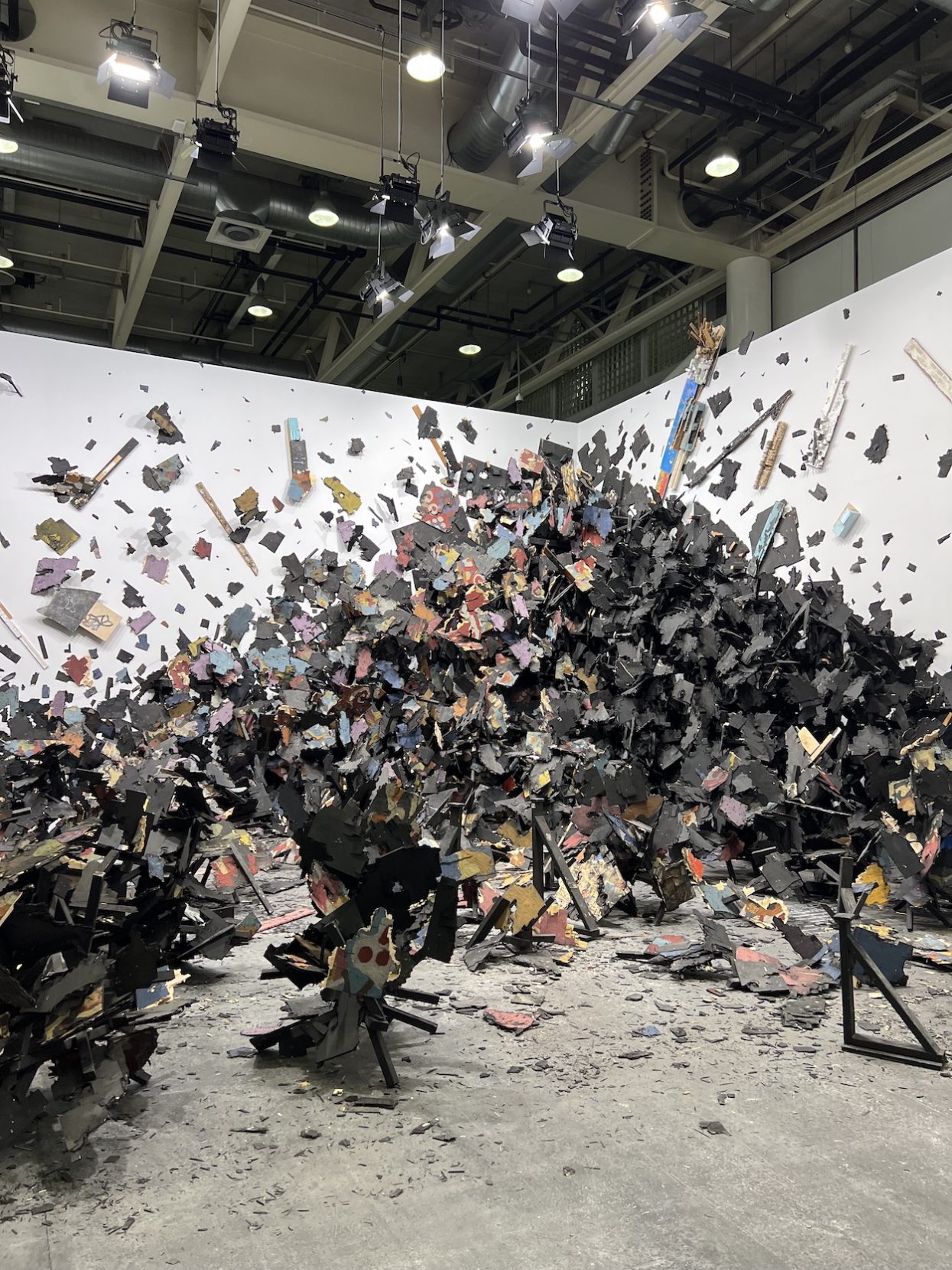 Otherwise, dealers approached NFTs with caution, encouraging hesitant buyers by pairing the digital assets with more traditional artworks. That was the approach taken by Galerie Nagel Draxler, which famously sold the first NFT at Art Basel last year, and this year offered three NFTs by Kenny Schachter. “We’re trying to merge the two worlds,” co-founder Saskia Draxler told Artnet News.  The dealer Jeffrey Deitch, however, forwent NFTs at his booth in favor of what he referred to as “significant art,” such as an AI painting of ocean currents by digital art star Refik Anadol. Deitch may have a point—Takashi Murakami recently apologized to his crypto investors after his NFT prices took a nosedive, and Beeple’s eyebrow-raising collaboration with Madonna of the popstar birthing robotic centipedes flopped. Pace, meanwhile, sold multiple versions of Jeff Koons’s Moon Phases NFT project for $2 million a pop.

“People’s predictions that the pandemic would be the end of art fairs have been proven radically wrong,” Marc Spiegler, Art Basel’s global director, told the New York Times. “You hear every different theory. There’s always money floating around the system.”