If anything productive has come out of America’s recent political turmoil, it’s a renaissance in protest art. It’s almost inevitable that these passionate works come with a side of rage and slander, but for Creative Time’s take on the movement, the nonprofit wanted to make something more positive. “We realized we needed a space to resist that was defined not in opposition to a symbol, but in support of one,” says Nato Thompson, the organization’s artistic director. In practice, that meant asking sixteen prestigious artists—Tania Bruguera, Alex Da Corte, Jeremy Deller, LaToya Ruby Frazier, Ann Hamilton, Robert Longo, Josephine Meckseper, Marilyn Minter, Vik Muniz, Jayson Musson, Ahmet Ögüt, Yoko Ono, Trevor Paglen, Pedro Reyes, Rirkrit Tiravanija, and Nari Ward—to each design a flag representing a cause dear to them. Together, “Pledges of Allegiance” became a series that channels some of the American left’s diverse concerns, including Flint’s water crisis and the repercussions of nationalism.

The project launched earlier today on Flag Day, when Creative Time raised Marilyn Minter’s piece on the roof of its New York headquarters. Artsy is auctioning the remaining flags on their website, and Opening Ceremony is selling a box set of T-shirts and sweatshirts featuring the designs. Creative Time hopes the project will inspire other institutions to join the fight. As Thompson says, “It’s our fervent hope that “Pledges” inspires others to join us in solidarity, flying these symbols of unity and shared identity on their own grounds.” 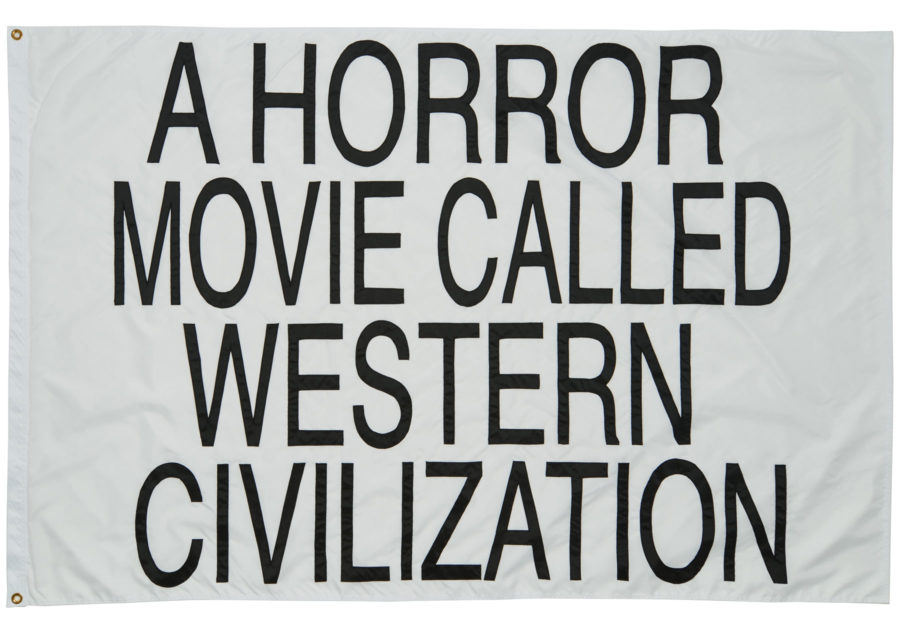 Public Art Fund Meditates on the Trauma of Today