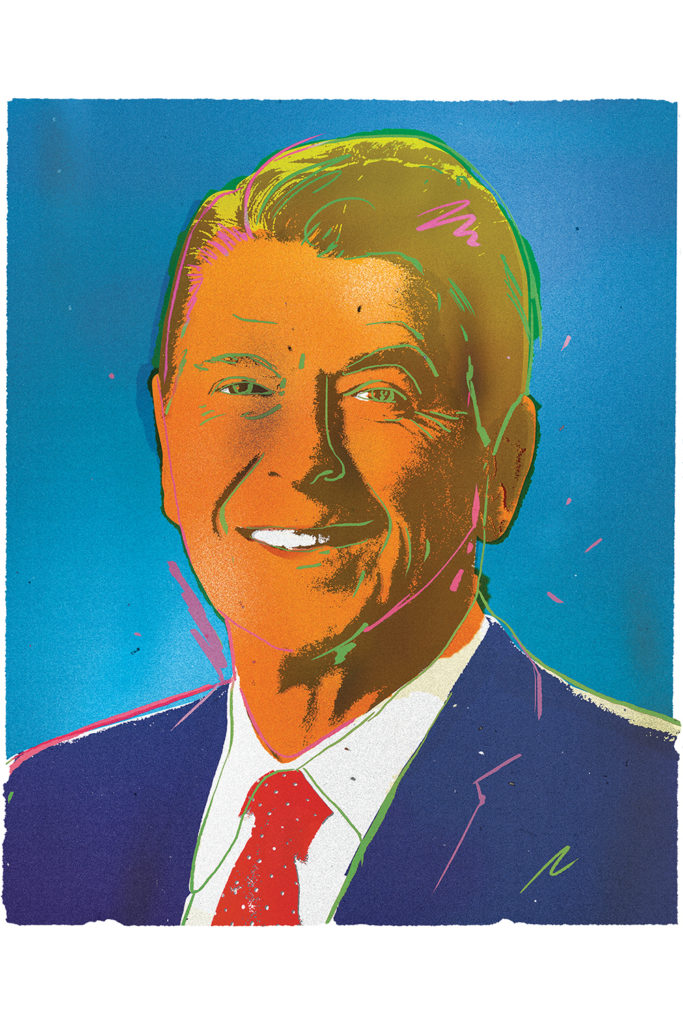 What Ronald Reagan and Andy Warhol Have in Common

Bob Colacello reflects on the two icons who defined his life and career as a writer and observer of high society.

By Bob Colacello
Illustration by Braulio Amado March 21, 2017
Share
Back

Bob Colacello reflects on the two icons who defined his life and career as a writer and observer of high society.

Two of my obsessions—I have several, though I prefer to call them extreme interests—are Andy Warhol and the Reagans. I know that’s an odd combination, and people often ask me how I jump from writing a book about Warhol to one on Ronald and Nancy Reagan. My first response is always that Warhol and Reagan had many similarities, starting with being born poor and being raised mostly by their very religious mothers. Both were actually mama’s boys, and Ronnie went so far as to call Nancy “Mommy.” Young Ronald, however, was much more athletic than young Andy.

My interest in Warhol’s work began in 1966, when I was a freshman at Georgetown, and went to see Chelsea Girls—five times. My best friends in college had a band called The Brave Maggots and we I sat in the theater transfixed by things I we had never seen before on any screen: boys making out with boys, girls shooting up girls, drag queens seducing acid trippers. I’d seen pictures of Warhol’s paintings of Elvis and Marilyn Monroe in Life magazine, and as I was a fan of both stars, I related to the subject matter. When I was able to vote for the first time, in 1968, the choice was between Richard Nixon and Hubert Humphrey. So I wrote in Andy Warhol.

Two years later, I was in film school at Columbia, and had started writing movie reviews for the Village Voice. Out of the blue, I got a call from someone at Interview, the magazine Warhol had recently launched, saying that Andy thought I could write for them. Andy soon realized I could talk to almost anyone and he started taking me to parties. Suddenly, I was thrust into this world of the Rockefellers and Rothschilds, Mick and Bianca Jagger, and Truman Capote.

At the time I started working with Andy, he was still feeling the effects of his near assassination two years earlier. The 24-hour party scene of the 1960s Factory was over, and the Superstars who surrounded Andy, including Edie Sedgwick, Viva, and Nico, were out. Andy personified that decade’s sex, drugs, and rock ’n’ roll rebellion against the puritanical order that had dominated America since its founding. But now, Andy Warhol Enterprises was run like a business. And the times were beginning to change.

The ’70s really took off in the middle of the decade, after the Vietnam War ended and Nixon resigned. My generation, the baby boomers, could finally stop protesting and start dancing. Fortuitously, this new music called disco came roaring out of the black clubs and into the gay bars, and in no time everything had merged into one big party called Studio 54. We put the hippie thing behind us and gradually rediscovered materialism, mostly in the form of fashion.

Then in 1980, along came Reagan, who not only made it okay to want to make money, but attempted to restore traditional values. Not long after the inauguration, I was introduced to Nancy at Le Cirque, where she and the new president were having dinner with some society friends. She seemed to take an immediate liking to me, and started calling me frequently from the White House asking for advice on how to deal with the press. That’s the way she was—she either instantly liked you or instantly disliked you.

So, how could I be obsessed with both Warhol and Reagan? You write what you know. I had the privilege of being close to both Andy Warhol and Nancy Reagan, so I would be remiss not to share my experiences and insights. Both Warhol and Reagan were pivotal figures of the late 20th century, and no one had more influence over Ronald Reagan than his wife. I view the so-called Pope of Pop, and the first Pop president, as two sides of the same coin. Andy was the prophet of the 1970s cultural revolution; Reagan represented the 1980s counterrevolution. It’s a battle that is still going on. Curiously, neither was taken really seriously until after the first died and the second fell into dementia. They were still calling Reagan a B actor when he was sitting in the Oval office, and the Museum of Modern Art didn’t give Warhol a retrospective until two years after he was gone.

Bob Colacello is a New York-based writer. He recently curated a group show called “The Age of Ambiguity” for Vito Schnabel Gallery in St. Moritz, Switzerland.