These 3D-Printed Vessels Create Their Own Fluid Universe

Audrey Large’s amorphous objects may look alien, but are very much rooted in the world at large.

Audrey Large’s amorphous, liquid-like vessels may initially come off as otherworldly pottery collected by an “alien” species—but they aren’t intended as such. The 25-year-old product designer, a recent Design Academy Eindhoven graduate, avoids ascribing meaning to her research-focused Implicit Surfaces series, which is spontaneously hand-sketched using a graphic tablet and 3D printed to a shimmering, iridescent effect. Delve beneath the surface, she encourages, to instead find “reflections on ‘now,’ in terms of practice, codes, and techniques.”

Large’s work defies categorization, existing within a fluid universe of its own hybrid materiality. Her interdisciplinary practice, ensconced somewhere between digital cinema and product design, blurs the lines between a physical object and its weightless visual representation. An image-maker at heart, she posits head-spinning theories about perception: “Instead of accepting objects as reality, why not think of them as visual effects of reality?” Ahead of Salon Art + Design at New York City’s Park Avenue Armory, where Nilufar Gallery will present Implicit Surfaces from Nov. 14–18, Large chats about the unexpected gray areas between cinema and design, and whether or not 3D printing can change the world.

These objects involve an intricate creation process. How did you land on this?

I studied product design at the Design Academy Eindhoven, but always worked with images. I bridge the two disciplines by envisioning objects as digital images—I design an image’s materiality and then figure out how it can be translated from digital to material. That’s where 3D printing comes in.

In my downtime, I read cinema theory with the eyes of a product designer. The frontier between these two disciplines is so blurred. Now, objects are made to produce images, which influence how we relate to our surroundings. Instead of viewing this as a dichotomy, we should rethink how we make objects because we’re also making images. My thesis examined visual effects in movies—not cinema as capturing reality, but manipulating reality. When we see blockbuster films, we enter a strange room and accept its narrative as reality within that time and space. I apply this mode of thinking to objects: Instead of accepting objects as reality, why not think of them as visual effects of reality?

How does social media factor into this equation?

My work reflects our surroundings. I reinject images of the world into what I make, and Instagram is definitely part of my research. I actually learned everything through YouTube tutorials, so technically speaking I didn’t even learn 3D modeling at school.

I often ruminate on making objects for use in everyday life. I’m not inventing anything new—everything is already here! People ask me about my perspective on the future, but I’m just making things that represent the now.

Your works have been described as “alien” and “otherworldly.” Do you agree?

Process is more interesting than meaning, which I leave up to the viewer to determine. Ascribing my own meaning contradicts my design freedom and spontaneity, so my objects never have fixed narratives. I’d never say they were inspired by aliens. Each object contains codes—both in its shape and on the surface—and I like to play on this. If it’s made at a small scale it can become jewelry, whereas it could be architecture at a large scale.

Calling my work “futuristic” or “alien” describes our current vision of the future. My work reflects on now, in terms of practice, codes, and techniques. In ten years, the technology will have progressed, but this is the technology today.

So you leave it to the viewer to draw their own meaning?

I prefer making loud, loaded objects because people can’t immediately discern the material or process. It creates confusion between the viewer, environment, and object, which yields more meaningful interactions.

How do people usually react to your work?

Reactions vary, of course, but people are curious. My objects are designed to resist description, but viewers tend to draw comparisons to what they already know, which might explain the alien descriptor. It’s funny that we need to reference safe, familiar concepts. 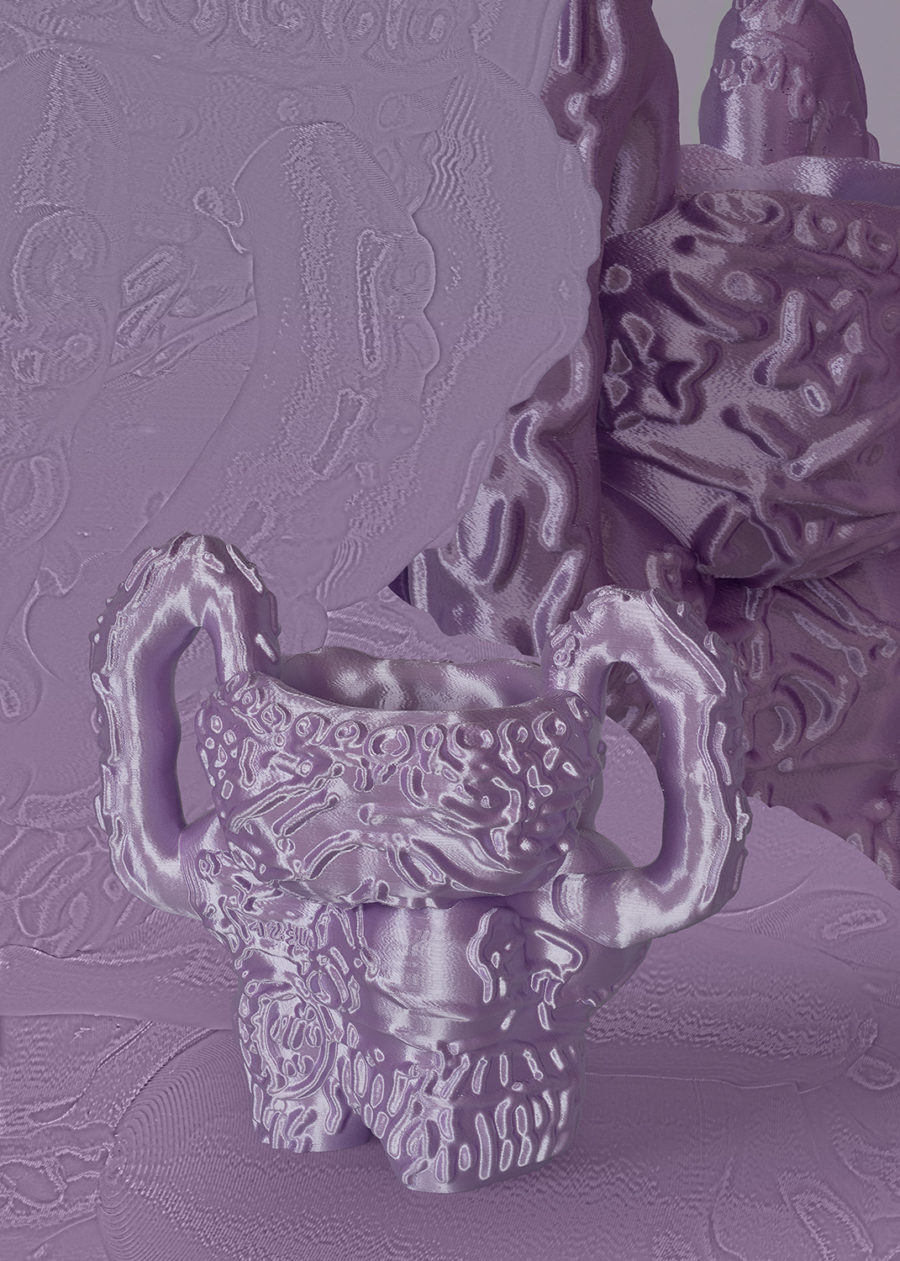 Do you think your work is helping people appreciate 3D printing more?

3D-printed objects have a distinct aesthetic, and I always try to see how far I can push the medium forward. Lately, I’ve been drawing more spontaneous shapes that can become challenging for the printer to execute. I often use 3D printing for prototyping—more of an intermediary step rather than an end result.

More people are embracing the technology and buying printers. It has some amazing applications, especially in the medical field. My way of using the technology is very humble—I don’t know if I’m doing anything that important!

Two years ago, I could never afford a 3D printer whereas now I own three. Of course, I had less money as a student, but a smaller-scale 3D printer now costs €300 instead of €2,000.

So how can this technology change the world?

I don’t know if 3D printing can save the world, but it’s definitely a tool. We need to understand how it works but not envision it as something new—it’s not new anymore. It enables the production of very precise shapes, which has more applications than I can speak to. [laughs]

MoMA Wants You to Get Lost in the Stacks