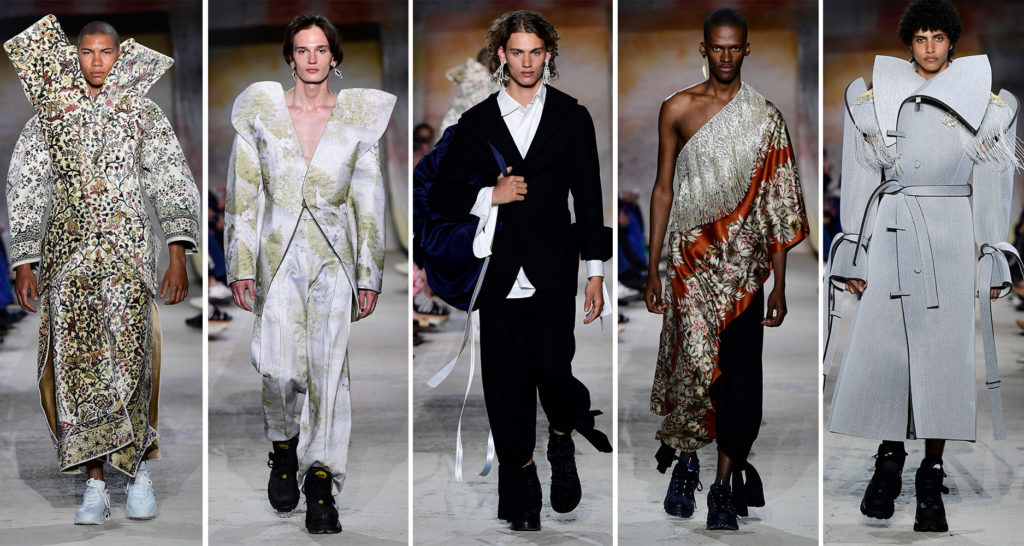 Christoph Rumpf is a student at the University of Arts in Vienna—but possibly not for long. Last Sunday, the Austrian fashion designer won the Grand Prix du Jury Première Vision at the 34th International Festival of Fashion, Photography and Fashion Accessories, an annual five-day showcase of emerging talents in these respective fields that is held in Hyères, France. He bested nine other competitors from across the globe, all whom are at budding stages in their careers.

“If I win, I might stop school and start my own line,” Rumpf said the day before the awards ceremony, inside the Shortlisted tent, which was sponsored by Mercedes-Benz, where attendees viewed  the finalists’ collections up close. “Just being here is so exciting and I know it will help me so much in my career, even if I don’t win.”

The Hyères International Festival, founded in 1986 by Jean-Pierre Blanc and centered at the picturesque Villa Noailles, is noted for being the birthplace of some of the most distinguished fashion designers working today, ushering them into the spotlight and connecting them with professionals who have enhanced their careers.

“Most of the designers say that even if they don’t win a prize, it’s already a kind of grant,” says executive director Magalie Guérin, before name-checking Viktor Horsting and Rolf Snoeren, Felipe Oliveira Baptista, Saint Laurent’s Anthony Vaccarello, and Paco Rabane’s Julien Dossena—all former Grand Prix winners who have since built successful careers.

Her brand, along with Mercedes-Benz, Swarovski, Galeries Lafayette, Première Vision, and Chanel are long supporters of the Hyères International Festival. Throughout the five days of workshops, exhibitions, master classes, and presentations at Villa Noailles, many of these companies expressed their commitment to supporting real talents that can take fashion to the next level, artistically.

To be sure, there are many funds and competitions—such as the Woolmark Prize, LVMH Prize, and the CFDA/Vogue Fashion Fund—that offer similar platforms, grants, and mentorships. The one in Hyères, however, is seemingly the only one that puts a heightened emphasis on creativity, on submitting collections that push the boundaries and don’t necessarily need to have commercial appeal. “We are looking for someone with their own world and their own identity—and is able to present it,” Ramsay-Levi says.

The 20-something designer walks away with winnings of over $22,000; more than $11,000 to collaborate with Petit Bateau and Chanel’s Métiers d’Art; and the opportunity to show at Mercedes-Benz Fashion Week Berlin in July, as part of the car manufacturer’s Fashion Talents program.

These prizes are guaranteed, but finishing up his education is still up in the air.

Designer of the Day: Gregory Buntain