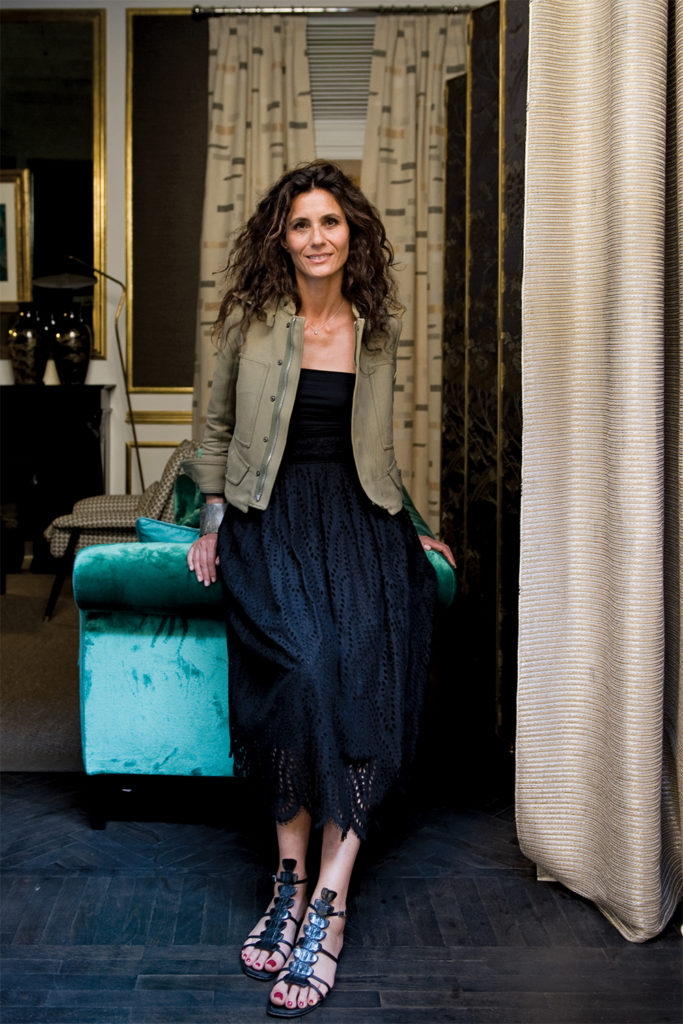 The textile magnate tells us why her heart and history is inextricably tied to the region.

By Aarti Virani
Portrait by Andrea Wyner August 12, 2016
Share
Back

The textile magnate tells us why her heart and history is inextricably tied to the region.

Caterina Fabrizio’s voice dips, almost reverently, as she describes a beloved piece from her family’s Italian textile company, Dedar. “Fabric should provide an emotional impact,” she says, waxing poetic about the Dante, a sumptuous but sturdy velvet that’s risen to bestseller status over the brand’s 40-year lifespan. It’s just one of the 3,000 high-end home materials, wallpapers, and trimmings currently offered by the design house. “We want people to fall in love with a fabric first, then figure out how to use it,” she adds.

As the co-owner of a family business that’s inextricably linked to its headquarters’ surroundings—the shores of Lake Como, which was Italy’s silk production hub at the turn of the 18th century—Fabrizio’s passion for artisanal traditions is only matched by her sharp eye for discovery. While Como fuels Dedar’s longstanding commitment to fine craftsmanship, neighboring Milan, the backdrop to her company’s sleek showroom, promises Fabrizio a front-row seat to an edgier design scene. “You cannot take Como without Milan,” she says. “It’s very important to have dialogue between the roots and the vision.”

Since she joined the business more than 20 years ago, its customer base, once solely native, has significantly expanded thanks to a fashion-forward approach. It now caters to an increasingly global clientele, and collaborates with renowned designers such as Stephen Burks and heavyweights like Hermès, who Dedar advises on its home furnishing line. “There’s a timelessness to our products, but we also don’t mind being a little daring, a bit audacious,” says Fabrizio. “We feel very confident that you can express yourself through an elegance that doesn’t necessarily conform.”

Though Fabrizio officially brought her creative muscle and free-spirited aesthetic to Dedar in 1994, she and her brother, Raffaele, spent the bulk of their adolescent years shadowing their enterprising parents on business trips to far-flung locales. It was on an excursion across the Indian subcontinent that a teenage Fabrizio first encountered the rustic perfection of matka, or hand-loomed silk, while journeys to Turkey’s carpet-producing regions sparked her interest in intricate Anatolian weaves. “We still have a lot of visual memories,” she says. “It’s why we’re so open to different inspiration and style sources.”

She might as well be expressing the peripatetic sentiment that streams through Dedar’s kaleidoscopic spring 2016 collection, an exuberant tribute to weaving and wanderlust. “The yarn is the protagonist this year,” she declares, singling out the Reversi, a tartan-inspired design. The rest of the cosmopolitan selection takes cues from 18th-century Chinoiserie, American textile artist Anni Albers, and Russian painter Kazimir Malevich, making it nearly impossible to define.

But Fabrizio has always resisted categorization, ensuring that all of Dedar’s offerings pair decadence with durability, and proving that form and function don’t have to be mutually exclusive. Case in point: Fireproof jacquard, which also plays a starring role in the latest catalogue. “When we first decided to apply advanced technology to our silks, our mill workers told us we were trying to get to the moon on a Vespa—it turned into a family joke, because that’s really what it felt like for a couple of years,” she says.

Despite her reach-for-the-stars ambitions, Fabrizio insists she’ll never drift from her family’s foundations in historic Como, where nearly 80 percent of the company’s lineup is still produced. “We try to make things where we can get them done best,” she says, “And there’s something very rich when you have roots there.”

“For an intimate experience, stay at the Villa Flori, a restored aristocratic residence that conserves its 19th-century charm. My friend Bianca is the owner and decorated it like a family home, using Dedar fabrics to line the interiors.” hotelvillaflori.it

“The menu at Antica Trattoria del Porto, a rustic lake house, is all freshly-caught fish. It’s reachable by boat or car; if you park on the street, you have to descend nearly 200 steps to get to the restaurant. To explore the neighboring San Martino church, ask the owner, Mr. Zambra, for the key.” 39-31-910-195

“For vintage furniture and lighting fixtures, I go to Demosmobilia across the Switzerland border in Chiasso, about 15 minutes by car from Como. But be warned: This is not a neat and tidy shop. It’s a real warehouse packed with timeless treasures.” demosmobilia.ch

“Isola Comacina is a must—the scenery on the tiny wooded island, a former artists’ colony, is always bewitching. In the early 1920s, it became the responsibility of the Brera Academy, a state-run fine arts institution based in Milan that was appointed to protect Comacina’s archaeological beauty.” isola-comacina.it

“I love having a cocktail at Villa d’Este. The hotel’s old-style waiters have a classic elegance; even the way they serve drinks is a demonstration of fine design.” villadeste.com

8 Must-See Exhibitions This Week, From Toronto to São

Meet the Rising Stars of French Design at...

At the End of the World, Infrastructure Will Save Us,...

A Shoppable Apartment That Its Designer Actually Calls

How It's Made: M. Cohen and Sons