How It's Made: M. Cohen and Sons

The Pennsylvania factory fabricates the final element to a standout Manhattan condo designed by Zaha Hadid.


BY COURTNEY KENEFICK
PHOTOS BY WILL FIGG August 11, 2016
Share
Back 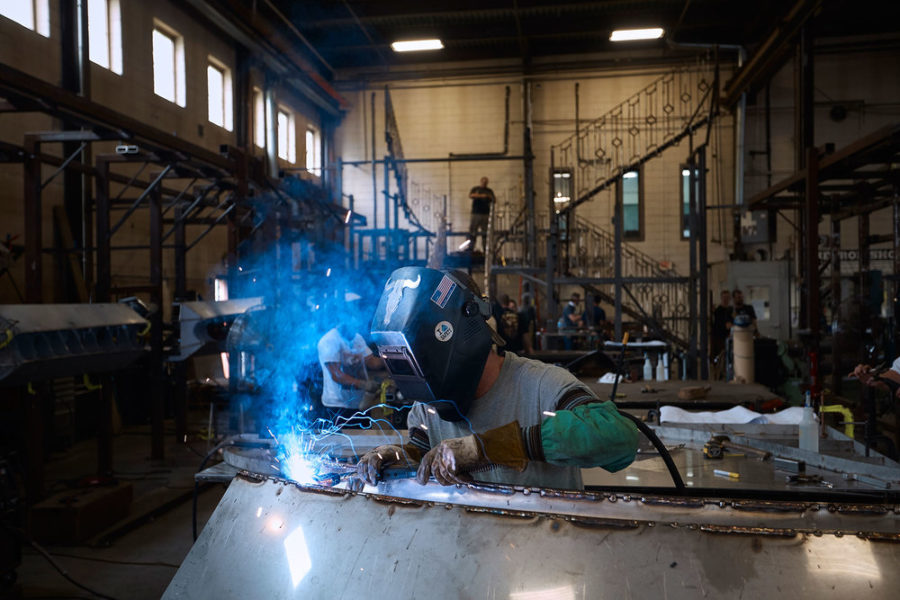 The finishing pieces to the late Zaha Hadid’s only New York building sit inside an unremarkable factory in a western suburb of Philadelphia. The property’s curvy stainless steel facade is in the hands of metal fabricator M. Cohen and Sons, a business whose name may not be as recognizable as the dame architect’s, but its breadth of work is impressive in its own right. There’s the gold-plated, climate-controlled encasement for Damien Hirst’s gilded wooly mammoth that sits near the Faena Hotel pool in Miami, or the focal point staircases at the National Museum of Jewish American History and Dior’s New York flagship. The five-story LED wall at Burberry in Chicago? That was them, too. If an architect is the head coach, the company is the quarterback, receiver, and defensive line, executing plays—in this case, turning concepts and dimunitive models into metal cynosures. Currently, Hadid’s vision for a sinuous silver exterior is being engineered, cut, and welded in the small-town company’s Pennsylvania workshop.

It may not have the same artistic renown as conceiving an architectural paragon, but there, metal is a medium. “You have to understand how we feel about it,” says Allen Cohen, the president and third-generation successor. “For us, metal is alive.” By us, he is referring to the 300 employees at the family-run operation founded by his grandfather, Max Cohen, in 1931. A Russian immigrant, Max started his own ironworks during the Great Depression after being laid off from master blacksmith Samuel Yellin. Over the years, various small jobs and repairs turned into local contracts. Then, in the ’60s, Allen’s father and uncle put a small ad to make spiral staircases in the newspaper. “We’d get 20 to 30 envelopes a day with cash and checks,” he says. “That grew into a $20 million business practically overnight.” That financial infusion bolstered the custom fabrication arm that the company has become known for. It now accounts for the bulk of the business—and the majority of the challenges.

Take Hadid’s 520 West 28th Street condos. In renderings, the under-construction residential building in West Chelsea is curvilinear and L-shaped. At M. Cohen and Sons, the facade is a massive 900-piece puzzle, each part different and at various stages of production. But zoom out with a macro lens and a portrait reveals itself: The structure is just one element of developer Related Companies’s metamorphic plan for the sleepy neighborhood. It sits two blocks from Hudson Yards, the firm’s transformative 17 million square foot real estate development. “We understand that it warrants a spectacular building,” says Greg Gushee, executive vice president of Related. “It’s unlike anything in New York.” Adds Cohen: “When you say you want to change the skyline of a major city, then I’m in.”

Dash Kitchen Is Here To Stay