Fashion Label or Arts Patron? With COS, It Can Be Hard to Tell

In its first dozen years, the brand has become just as well known for supporting art and design as it is for minimalist off-the-rack wares.

André Fu, Studio Swine, Michael Sailstorfer, Bjarke Ingels—it’s a list one might associate with a biennale, not a fashion label. And, yet, they are just a sampling of the creative talent that Swedish apparel brand COS has pulled into its orbit.

Marked by Scandinavian and Japanese influences, COS (“Collection Of Style”) is a seasonal, more mature alternative to parent company H&M’s fast-fashion approach. It also maintains an equally considered patronage of the arts. Support of the Dia Foundation, the Serpentine Gallery’s Park Nights, and an annual pavilion at Milan Design Week have established a design world presence, while its retail flagships—some sleek ground-up constructions, others smart examples of adaptive reuse—demonstrate a keen architectural eye.

While fashion companies regularly work with artists, COS’s efforts are less brand alignments than curatorial statements. “COS and I talked openly and learned we share values regarding the plastic waste crisis, sustainability, and democratizing creativity,” Arthur Mamou-Mani says in reference to Conifera, the sustainably rendered latticework pavilion that took over Palazzo Isimbardi—and Instagram—during Milan Design Week 2019. “We were both excited to design something that the integrated values I’m passionate about. It ended up being a beautiful, collaborative process.” 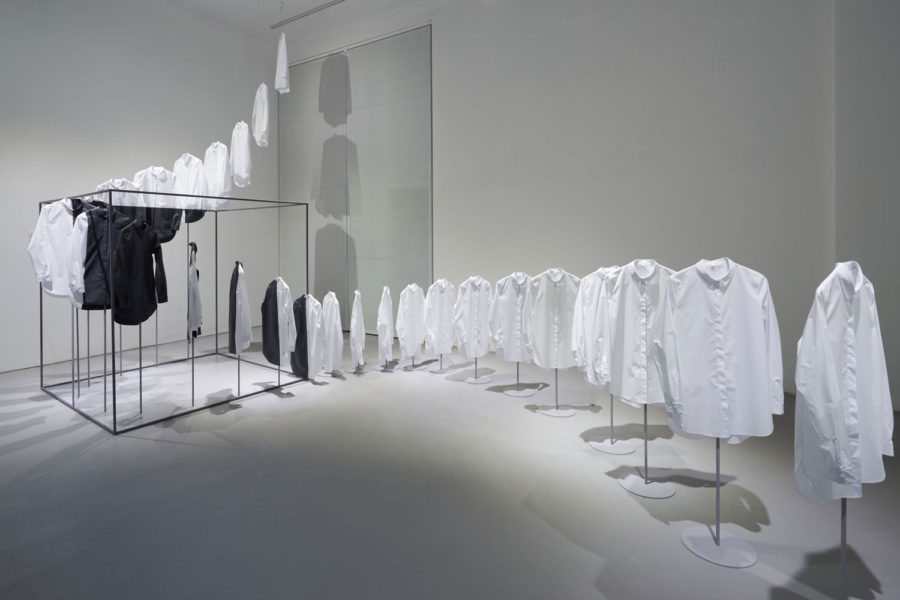 COS creative director Karin Gustafsson echoes that sentiment. “Partnerships must take a democratic approach,” she says. “We just want to enable creative talent to showcase their work to a broader audience.” She doesn’t expect the outcome to culminate in new products, either. It’s about the creative process behind the collaboration for COS. “We always aim to give our partners carte blanche, only requiring that they understand what we stand for.”

Take light artist Phillip K. Smith III’s work with COS on Open Sky, the brand’s pavilion during Milan Design Week 2018. The massive, upward-angled mirrored fan transplanted fragments of sky into the 16th-century plaster-and-terracotta courtyard that would host Conifera one year later. “Gustafsson mentioned that several of my projects were on their in-house mood boards,” Smith says. “I’ve been approached by a multitude of brands, but there’s too often a challenge regarding freedom and ownership.”

COS, on the other hand, gave him license and support. “They believe that by providing open opportunities for creatives, they can create a better world. COS was less about working with a brand—it was more like working with a museum.”