On Jan. 19, alongside Japan House Los Angeles, Surface hosted the 41st installment of its Design Dialogues series. The discussion, which took place at Hollywood & Highland, featured Spencer Bailey, editor-in-chief of Surface, and Kunihiko Morinaga, Japanese fashion designer and founder of ANREALAGE. The two spoke of Morinaga’s debut U.S. exhibition “A LIGHT UN LIGHT,” which is currently on display at Japan House L.A. through March 21, and features a range of his work from 2007 through 2018. The exhibition was inspired by how people experience fashion through the lens of technology, and emphasizes the idea of duality—a comparison of the ordinary versus the extraordinary—which draws from the ethos of the ANREALAGE brand.

Morinaga discussed how his initial interest in fashion was not sparked until he was about 20 years old, while he was studying sociology at Waseda University in Japan. “It was at that time in ’98 and ’99 that brands like Margiela and Comme des Garçons were [on the rise] … this boom in avant garde fashion was very appealing to me,” Morinaga said.

Bailey found Morinaga’s idea of the “extraordinary” particularly compelling and inquired about whether Morinaga’s designs were influenced by the culture of street style. “I wouldn’t say street culture as much as that I want to create items that would not normally be incorporated into fashion,” Morinaga said. “I draw inspiration from science and physics, and try to integrate those [concepts] into the idea of fashion.” “The exhibition is designed in a way that you don’t simply perceive or receive fashion—you hear it, you can touch it, you interact with it—it’s how you experience it, both with and without your smartphone,” he said.

During the talk, Morinaga’s team brought out pieces from his collection to demonstrate the specialized technology incorporated into his clothing. As his team walked three white jackets around the room, guests were encouraged to take photos with their smartphones—but only with the flash on. Morinaga asked guests to compare what they saw with the naked eye, versus through the lens of their phones. As the photos appeared on screen, the jackets suddenly appeared patterned with multicolored intricate designs. Morinaga continued, “This experience begs the question: Which fashion is real? What you see with your eyes, or what you see on your screen?” 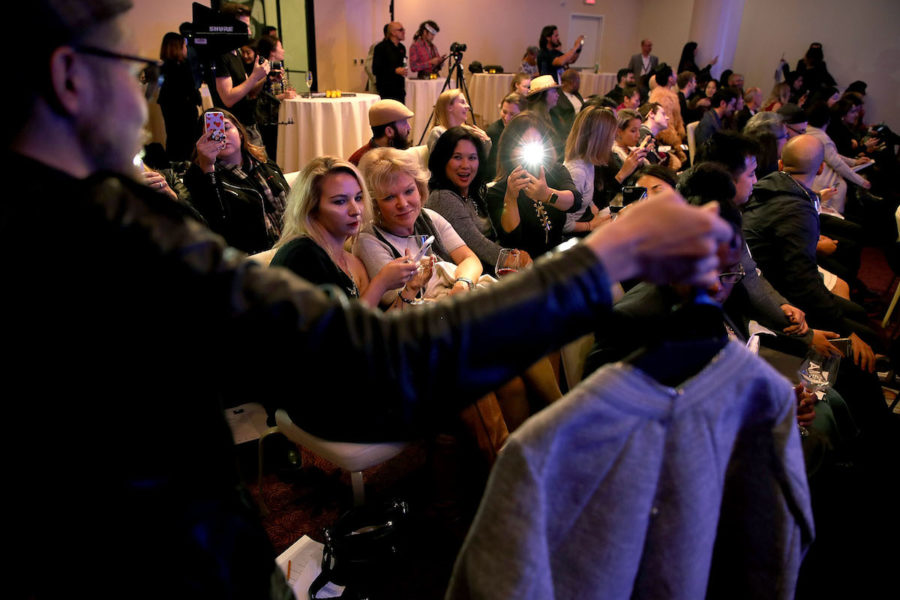 Learn more about the “A LIGHT UN LIGHT” exhibition here.

Special thanks to Japan House Los Angeles and Hollywood & Highland.

How Artists Are Bringing a Dose of Fantasy to...