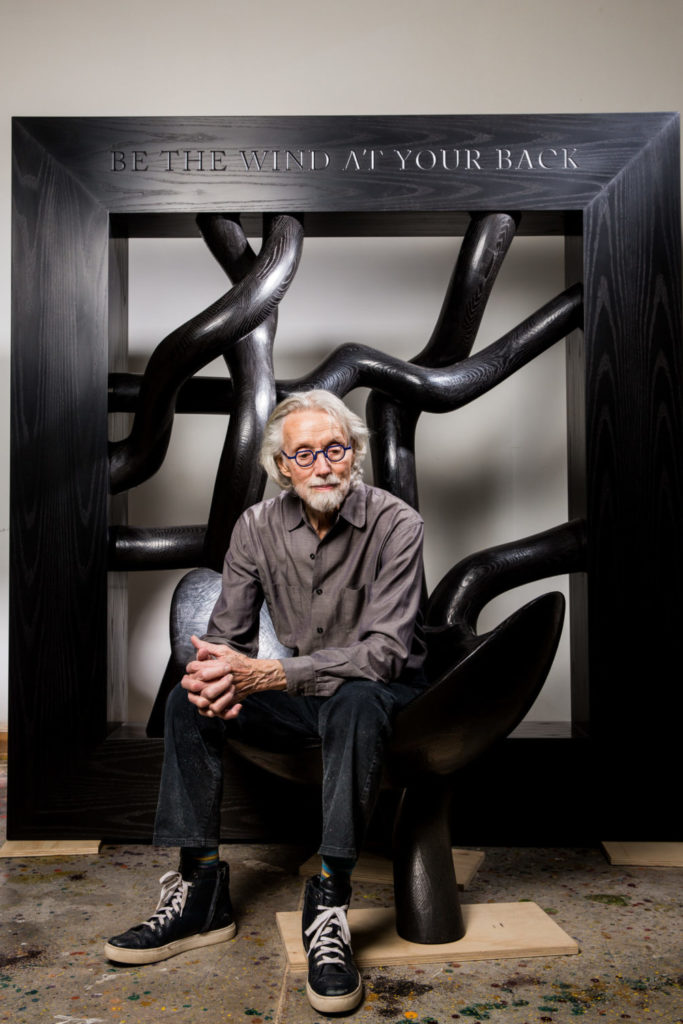 Our design editor looks back at her time with the pioneering furniture designer and the experience of his singular spirit.

Our design editor looks back at her time with the pioneering furniture designer and the experience of his singular spirit.

Early this morning, I received word that Wendell Castle passed away.

Many people knew him far better than I did; my interaction with Castle consisted of a single day at his studio, located just outside Rochester, New York, last April. It was the day before my birthday, and I considered the experience something of a gift. I’d flown upstate to interview him for a feature I was writing for our annual American Influence issue, and was eager to step inside the world of a man who was among the first American designers to question the divide between utility and fine art. In the precious hours that followed, Castle showed me how the things he was known for—his wiggly, stack-laminated furniture, remarkable work ethic, and ingenious use of such power tools as a giant wood-carving robot, among them—played out in his everyday life, where his spirit acted as a magical glue that fused everything together and allowed him to build, layer by layer, a legacy unmatched by any American furniture designer of his peer group.

On that sunny spring morning, Castle picked me up from the airport in a 1996 navy blue Bentley Brookland. Nonchalantly, from behind the wheel, he told me about each site we passed on the drive to his studio in great detail. He pointed out a modest diner in the neighborhood’s downtown area, where we returned for lunch later that day. While I prepared to eat my salad, Castle had drawn his fork and knife to have at an open-face cheeseburger (“I don’t like the bun,” he told me), which he had paired with onion rings. I couldn’t help but smile: here I was, sitting at this ramshackle restaurant with a skinny, soft-spoken 84-year-old legend who was cutting a meat patty into neat little slices and noshing on a deep-fried side that typically might accompany a kids’ menu entrée, peering down at his feast through quirky cerulean-hued Anne & Valentin spectacles. His authenticity was utterly refreshing, and it permeated everything he did.

Nothing fazed him that day. When our photographer, covered head-to-toe in tattoos and piercings, arrived, Castle greeted him as if he were an old friend. “You can call me Wendell,” he told Clay Patrick McBride, who had politely been addressing him as “Mr. Castle.” When the power went out, Castle and his crew wheeled out a generator so we could begin his portrait session on time. “I’ve had people ask what my real name is,” Castle said during the shoot. I chuckled to myself. Of course he’s really named Wendell Castle. It’s a name that encapsulates the enchanting, wizard-like wonder he so comfortably embodied.

Later that week, I called the curator and writer Glenn Adamson, who knew Castle well. We talked about the relentlessness of Castle’s desire to create, and his curious combination of character traits. “On the one hand he’s total fantasy, and then he has this calm, steady work ethic of a Midwestern farm boy. He just works all the time,” Adamson said. “But he works in this kind of steady way, not the bohemian way of waiting to be moved by an idea. He just has a kind of rhythm.” The conversation turned to Castle’s penchant for flashy suits, which he wore to special events. “He’s a sharp dresser,” Adamson observed. “In a funny way, he’s also kind of shy. What he really loves is being in the studio and making his work, and the sharp-dressing thing is just, you know, part of his job—he’s a designer so he dresses well.” He paused for a moment. “There is nothing inauthentic about him, which is extraordinary. He’s always trying to live up to everything he does.”