As told to Spencer Bailey
Photographs by Weston Wells June 19, 2017

Designed by Eero Saarinen in the late 1950s and completed in the early ’60s (and later expanded by Kevin Roche and John Dinkeloo in the 1980s), the Bell Labs building in suburban Holmdel, New Jersey, was the Apple Park of its time. For decades, from inside the 2,000,000-square-foot building, researchers—several of them Nobel Prize–winning scientists—developed some of the most game-changing work in the field of telecommunications, from the touch-tone phone to a discovery that led to the Big Bang theory. In 2007, after the office complex had changed hands, it was abandoned and set for demolition. Thankfully, the latter never happened.

Ten years later, it’s now a humming construction site, following a $27 million purchase in 2013 by Somerset Development. Overseeing the design and master plan is the New York–based firm of Alexander Gorlin, an architect, critic, and scholar known for bringing modernist thinking into his multifarious projects, including the renovation and expansion of Louis Kahn’s Temple Beth-el in Chappaqua, New York, and the recently completed Boston Road low-income housing complex in the Bronx.

Gorlin recently took Surface on a tour through the space, which is starting to see tenants—such as Guardian Life Insurance (the company leased 90,000 square feet) and a range of technology firms, start-ups, and others—move in or secure space. Here, Gorlin talks about the genesis of the project, and how he’s maintaining the soul of the structure while invigorating it with new energy. His aim: to create a Silicon Valley–like creative and social hub via glass-walled offices, cafés and restaurants, retail shops, a rooftop hotel, a conference center, and more.

I met the developer Ralph Zucker [president of Somerset] with the architect Andrés Duany about 15 years ago, when we were master-planning Industry City in Brooklyn. Back then, Industry City was still an unused gigantic series of warehouse buildings. I think we were really ahead of our time, because that project didn’t really happen until 10 years later.

Ralph and I worked on a number of things together, but nothing ever came to fruition. We became social friends, and I went to his children’s weddings, which were at Orthodox Jewish facilities in Brooklyn. Since I wasn’t dressed appropriately, no one would talk to me at them—until he bought me a wide-brimmed Jewish hat, which was actually a Neapolitan black hat from the 1920s. After this, I became accepted into the fold, and, lo and behold, I was later offered the Bell Labs project.

When I first saw the facility, about eight years ago, it was like a modernist ruin. But it was of an urban scale, which is what Ralph was excited about. It’s what he calls a “metroburb.” Even though it’s a freestanding corporate facility in the middle of suburbia, it’s also at the scale of a town center. It’s like the crossing of four blocks in a town, where the avenue is 100 feet wide and the crossing is 60 feet wide. The 100-foot width is that of a boulevard in the United States, like Lincoln Road in Miami, and it historically relates to the Crystal Palace in London from the 19th century, St. Peter’s Basilica, and other grand-scale projects that are at the limits of the human scale. It seemed to me that Lincoln Road was a model for what could be done here in terms of having stores and cafés and restaurants that would open out into a public street.

We really developed the brief for it ourselves. It was, how could you organize a place like this so that there could be activities of different scale taking place in the atrium? The idea here is to create a lively pedestrian town center. When we got here, it was filled with small offices and cubicles and overgrown with plants. We had to adapt it to the new use, to make it an active place as opposed to a passive sitting area for corporate scientists—which it was for decades. That’s the difference: Originally, the building was for researchers who were working in dark, windowless rooms, who would emerge from their cocoons into these thousand-foot corridors with ridges that had ashtrays every 20 feet.

Our design activates the corners and the ground level, which will offer retail units, a library, and some institutional spaces. The main stair leads to the lower level, which will have a conference center and a banquet hall. There will be activities that will spill out from below, up into the atrium, and vice versa. We’re creating an overlapping flow of activities all the way up to the roof, where there will be a one-story, 225-room hotel that sprawls the building’s full quarter mile. All of this came from figuring out how we could open these formerly windowless offices. We wanted to use the same module that Saarinen had, but with glass, to make it more participatory.

A major issue issue we had to think about was the scale: How do you break down these massive atriums into something people could relate to? That’s where the Josef Albers patterns of overlapping squares and rectangles I brought into the atrium floor came from. They’re almost like a woven carpet. I was inspired by the original yellow carpet in the entry pit, which to me was clearly an homage to the square. Albers didn’t work on the building, but he knew Saarinen from when they were students at Yale. And the building has certain Bauhaus influences in terms of spatial penetration of the interior. That’s why I started looking at Albers’s paintings, to create a tiled pattern to break up the undifferentiated space. I found something from 1929, and that’s what we used. This idea of enlarging art came from I. M. Pei, whom I once worked for and who has done this in his projects. I later called the Albers Foundation to get permission, and they endorsed it. 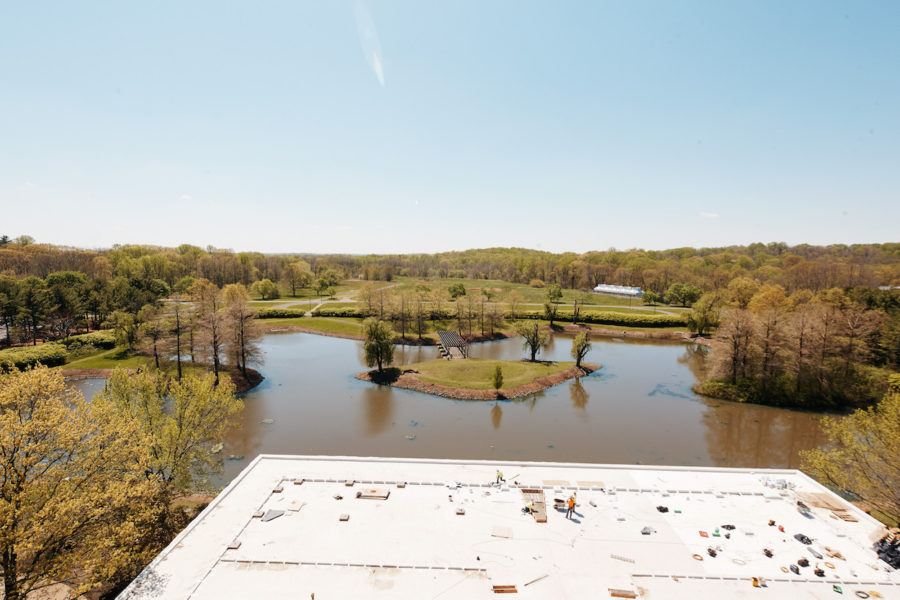 18
Slideshow
Bell Labs
Inside and outside the under-construction Bell Labs building. …

This is definitely the largest single-building project I’ve ever done. I would have been more intimidated by this commission had I not previously renovated a Louis Kahn synagogue. I also did Daniel Libeskind’s Manhattan apartment. This project is a great historic responsibility, but I also taught history at Yale for many years, under Vincent Scully, so dealing with the history of architecture is something I’m familiar with.

This is why working with Ralph is so great: Because of our relationship, he asked me to help out on this. Without that, this building would have gone to a Gensler or SOM. To win any other project of this scale, I would have needed to show how many buildings like it I had worked on. Coincidentally, my office is also doing a 100-acre master plan in Berlin right now. It’s extremely unusual for a very small office like mine—we have 10 people on staff—to get to do projects of such varying scales.

I see my role here as being a kind of gentle interpreter and interrogator rather than superimposing invasive diagonals and bridges all over the place. If Rem Koolhaas was doing this, there would be major slicing and dicing. This is a quiet intervention.