Under the wing of newly appointed director Christine Messineo, Frieze New York brings a distinctly international program to The Shed at Hudson Yards while simultaneously strengthening its ties to the city.

When the pandemic halted physical events more than two years ago, Frieze found itself in a period of flux. Not only was the contemporary art fair, which originated in London, gearing up for its 30th anniversary, but a spate of senior departures would soon throw its leadership for a loop. Of course, the fair quickly found its footing: it launched the successful Frieze Viewing Room, named former gallerist Christine Messineo as director of both the New York and Los Angeles editions, and relocated from its longtime home on Randalls Island to The Shed, a multidisciplinary arts space at Hudson Yards in Manhattan.

Frieze New York, which is on public view until Sunday, can be seen as Messineo’s inaugural outing. (Much of the program for the Los Angeles fair, which took place in February, was already in place by the time she joined in November.) It continues a winning formula that Frieze tested out last year, in which it dramatically reduced the number of dealers from upwards of 200 to a more manageable 65. “I was an active participant in Frieze for years,” Messineo tells the New York Times in reference to her previous role as director of Bortolami Gallery. “The visitor really benefits. I think it encourages longer conversations.” 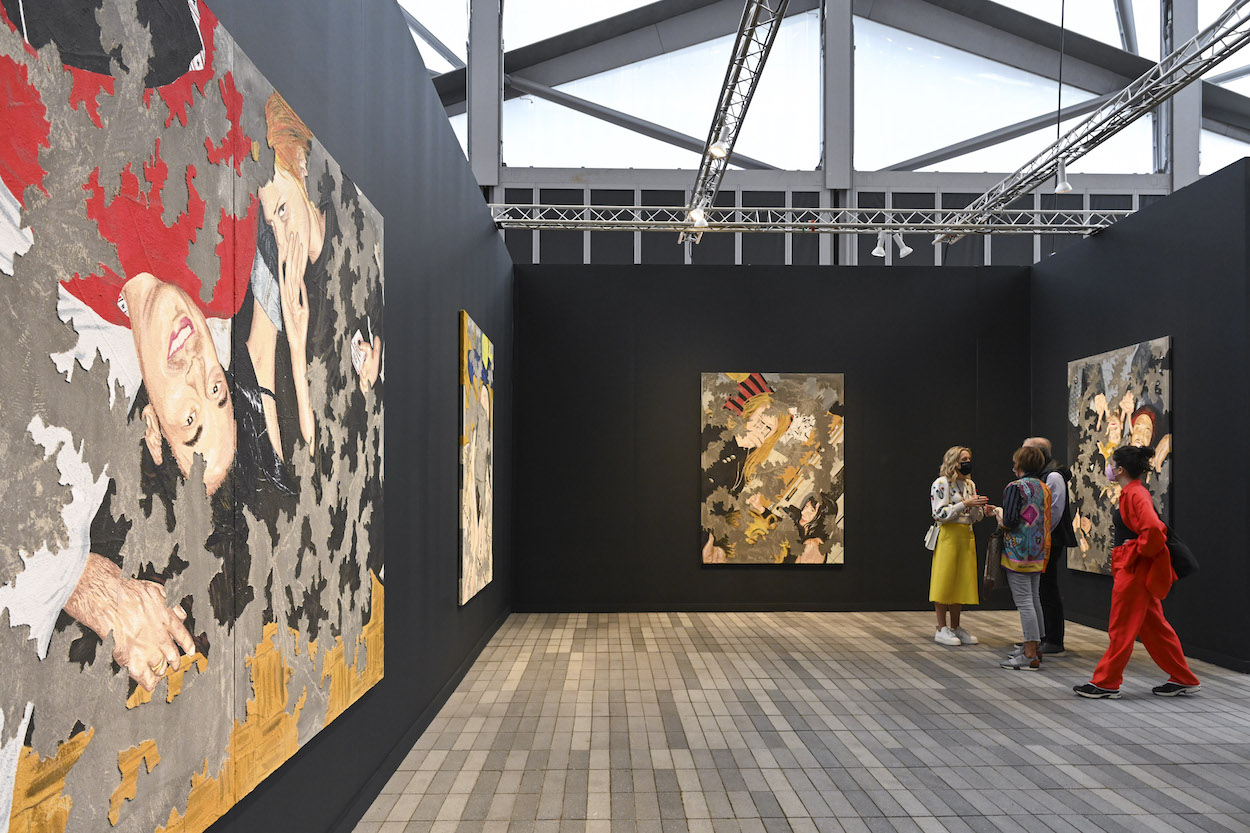 Under Messineo’s guidance, Frieze’s program has a far more global feel while simultaneously strengthening its ties to the city. Its gallery program remains largely American and European, with the majority maintaining at least one space in the city, but welcomes new players such as the Tehran-based Dastan Gallery, Capsule Shanghai, and Seoul’s Gallery Hyundai. Activations even skew global, with Swiss skincare mainstay La Prairie bringing NFTs by Berlin and Hong Kong artist Carla Chan into the fold and Maestro Dobel Tequila’s “Artpothecary” celebrating the Mexican Golden Age. More NFTs can be found at the LG OLED lounge, which presents Kevin and Jennifer McCoy’s mesmerizing Quantum Leap: Primordial Star 3 on LG’s transparent screens.

In the sea of booths, solo presentations largely stole the show. Of note is Gagosian, which unveils four giant untitled canvases by Albert Oehlen made with materials from supermarket ad cutouts (pictured). Visitors can also indulge in the caffeinated Kafftee, a beverage of the German artist’s own making, as a pick-me-up once “fairtigue” sets in. Other highlights include the Moroccan-born Latifa Echakhch’s fresco paintings of frenetic nocturnal escapades at Pace Gallery, Nancy Grossman’s poignant self-portrait studies for Michael Rosenfeld Gallery that still feel contemporary despite being four decades old, Los Angeles painter Eamon Ore-Giron’s gilded totemic abstractions for James Cohan, and Charles Gaines’s Plexiglas views of photographic oak trees ominously obscuring colorful grids for Hauser & Wirth.

Perhaps most notably, Messineo enlisted the help of her old friend, the conceptual artist Tom Burr, who published Eight Renovations: A Constellation of sites across Manhattan in 1997. The powerful text-based work explains the transitional history of eight different places across New York, but never had a physical iteration until now. Burr began wheatpasting his Eight Renovations across Manhattan to build hype, adding a ninth site at The Shed in order to discuss the gentrification of Hudson Yards, a controversial development noted for gerrymandering to qualify for government funds earmarked for public housing in Central and East Harlem.

Messineo also worked on a “Plan Your Vote” initiative, encouraging fairgoers to check their voter registration on-site ahead of this year’s primary and midterm elections while nodding to The Shed’s role as a local polling place. Frieze will also showcase four New York alternative spaces and nonprofits: A.I.R, Artists Space, Electronic Arts Intermix, and Printed Matter. “Though we have a fair, we’re connected to the city beyond just the commercial world,” Messineo tells ARTnews. “There are social issues that are important to us, to the artists, to the galleries that we work with. We use art fairs to explore the city more thoroughly. I want to make sure Frieze is part of that.”

Reebok and Eames Office Drop Elephant Sneakers, and Other News