Playgrounds typically elicit a sense of joy—a carefree feeling some associate only with childhood. But photographer Fujio Kito’s images of Japan’s retro playground structures, including an old green-and-yellow slide modeled after a rotary phone off its hook, suggest a more menacing side to these sites of imagination: their imminent disappearance.

As the 2020 Tokyo Olympics quickly approach, the city, including its playgrounds, has undergone a tremendous revamp. Many of the well-used play structures are being replaced or refurbished. “It is a little lonely that old playground equipment is gone,” says Kito, who first conceived of this series in 2010, and has spent the past three years capturing playgrounds throughout the country. Always shooting at night, Kito frames the equipment against a matte black sky, where an eerie solitude and emptiness lurks. A weathered blue whale sits in waiting with lit mouth agape. Its eye glows as the photograph’s prominent source of light. A blue robot surrounded by cherry blossoms stands with its long arms outstretched, beat up and abandoned. “The equipment in Japanese parks is not ordinary playground equipment. I feel art in it,” he says. “Before [it’s all] destroyed, I want to preserve it as a work.”

Kito has plans to extend his project overseas in Australia and the United States, as well as other countries in Asia. There, he will have another chance to capture disintegrating slides stylized as pink elephants, giant chickens, and frogs ravaged by time—until they too inevitably disappear. 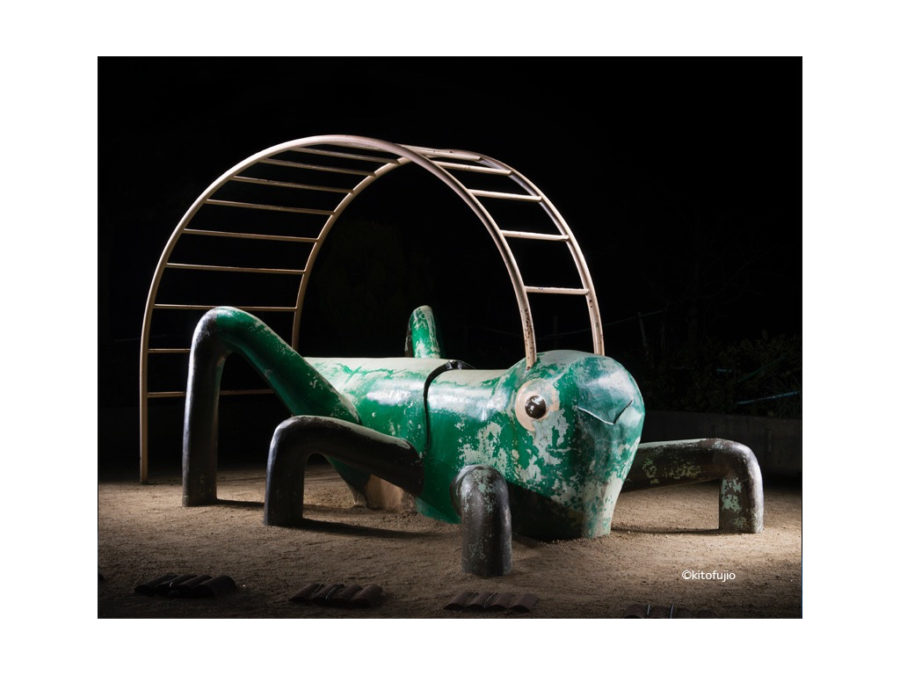