The Staying Power of Gaetano Pesce

In the 1960s, predating the rise of postmodern iconoclasm, Gaetano Pesce was busy honing his experimental claws. The University of Venice graduate, who hails from La Spezia, Italy, had his sights set primarily on performance art—on one occasion, he filled an entire auditorium with fake blood, and on another, promised to make a portrait for anyone in attendance, simply presenting them with a mirror. These cheeky subversions helped pave the way toward his current renown as one of the world’s foremost industrial designers, celebrated for infusing personality into everyday objects by wielding shape, material, and color into unexpected forms with the utmost dexterity.

Noted for their trailblazing use of synthetics such as polyurethane, his pieces almost seem designed to confound and entice. Some of them inflate, others seem effortlessly draped, and one evokes a 3-D manifestation of a casual freehand drawing. “Artistic works must always be made from discoveries,” he tells Surface, dismissing mannerist methods and repetitive academic work. Pesce has always been intent on dissolving boundaries, a radical and widely influential approach that his intimate Brooklyn Navy Yard studio continues to uphold today.

Pesce, 79, has since moved on from his performative roots, but admits “there is no hierarchy in expression—it depends on the ideas.” Those range from architectural projects and drawings to projects for an object, and even, still, a performance. Indeed, inaugurating Salon 94 and Salon 94 Design’s brand-new Upper East Side space, a spectacular 1910s townhouse across the street from the Guggenheim Museum, “WORKINGALLERY” sees Pesce virtually “transfer the atmosphere” of his own studio inside the gallery.

Among double-height shelves packed with curious creations that span his five-decade career, Pesce himself will be working each afternoon (through Nov. 2), while his studio assistants complete routine, day-to-day tasks: preparing molds, pouring resin, and hand-finishing objects. The public is welcome to wander freely inside during regular opening hours and observe these processes unfold firsthand, complete with their cacophonous sounds, machines, and urgent, improvisatory energy. “It’s a beautiful idea to give visitors an idea of what it is to create—it’s not only me having an idea, it’s also a realization,” says Pesce.

His own pieces, including an arboreal 54-arm floor lamp, blood-red Foot lounge chair, and a wooden edition of his iconic Up armchair, populate the ground-level gallery. Most notably, he shares a brand-new resin chair, called Nobody’s Perfect, which he describes as “a little creature, sweet, intriguing and changing from chair to chair,” forecasting what his assistants are cooking up. The end result, he notes, may not be as ambitious in scale as his most famous works, but grandiose expectations miss the mark. “We’ll create two vases, each for a single flower, destined for the Performa Festival,” which is co-presenting the closing performance as part of its biennial on November 2.

Meanwhile, upstairs on Salon 94’s second floor, a mesmerizing installation by Max Lamb positions the noted experimentalist as the ideal generational counterpart to Pesce bar none. (Pesce claims to “have no idea” who are today’s most innovative product designers following his footsteps, but it’s easy to see his influence in the work of Lamb, along with Katie Stout, Chris Schanck, and Misha Kahn.) The London artisan debuts the latest pieces of his Poly series, a group of shimmering lapis lazuli furnishings made of polystyrene scraps sourced from residue in his studio. Backdropped by the historic interior’s soothing gray-green walls, the show offers a last hurrah before Salon 94 gears the space up for renovations, with a reopening slated for fall 2020.

At the opening night of WORKINGALLERY, which kicked off with a celebratory dinner on the second floor co-hosted by Surface editor in chief Diane Solway, Salon 94’s Jeanne Greenberg Rohatyn, and Marc Benda (whose gallery, Friedman Benda, concurrently presents “Age of Contaminations,” a critical survey of Pesce’s works from 1968-1995), Pesce had no trouble resurrecting his early performative panache. He made a humorous speech to attendees, including Suzanne Demisch, Jessi Reaves, and Tom Sachs, in which he imitated a workers’ union representative sent to speak about Pesce’s talent. “He’s a brilliant creative mind! Michelangelo, compared to him, was like a child,” he declared, sparking a chorus of laughter and amusement. Perhaps this gesture explains his staying power—by effortlessly fusing the fantastical and real, no matter the medium, he’s able to reignite childlike wonder in even the most accomplished onlookers. 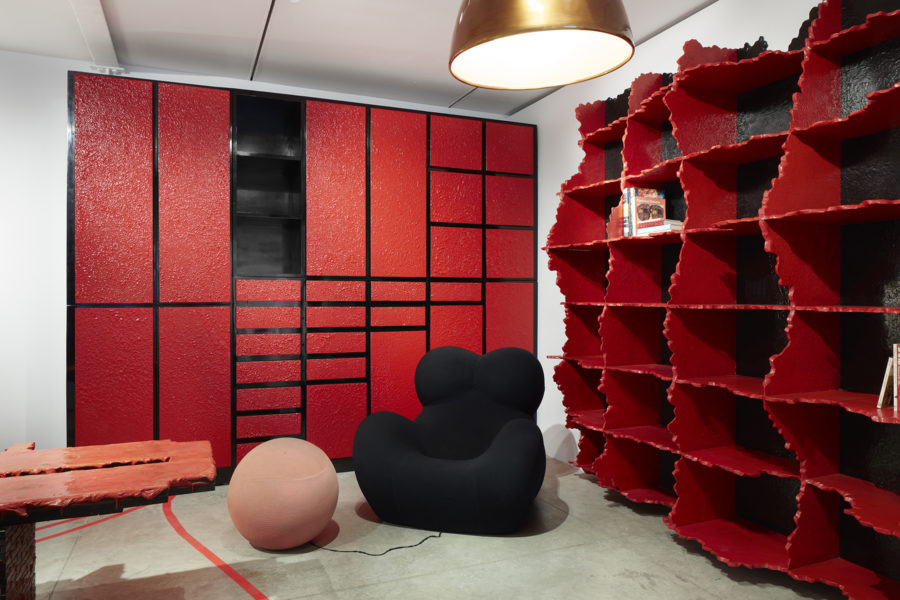 5
“Age of Contaminations” at Friedman Benda
…

Why Singapore is Asia's Next Design Capital