A sprawling complex by WXY would revitalize the island’s underused waterfront—and may be what New York needs to rebound from pandemic-induced economic shortfalls.

The global climate crisis has again come into focus as unprecedented wildfires ravage the West Coast, casting a smokey haze as far east as New York. At the same time, the city is facing a pandemic-induced economic fallout and needs smart ideas to rebound. It seems serendipitous that the nonprofit Trust for Governors Island has released a proposal to rezone parts of its underutilized waterfront, long set aside for economic development, to incubate a climate research center. Renderings by the local firm WXY depict a sprawling complex that would include public programs, offices for green tech companies, and space for a university or research institute.

“As a city of islands with 520 miles of coastline, the devastating impacts of climate change remain one of the most urgent issues facing our communities,” says Alicia Glen, Trust for Governors Island Chair. “This exciting plan for Governors Island will bring a tremendous resource that not only represents an important step forward for the City’s recovery, but also builds upon our history as the global center for innovation and progress.” If approved, the center is projected to create 8,000 new jobs and $1 billion in economic impact. 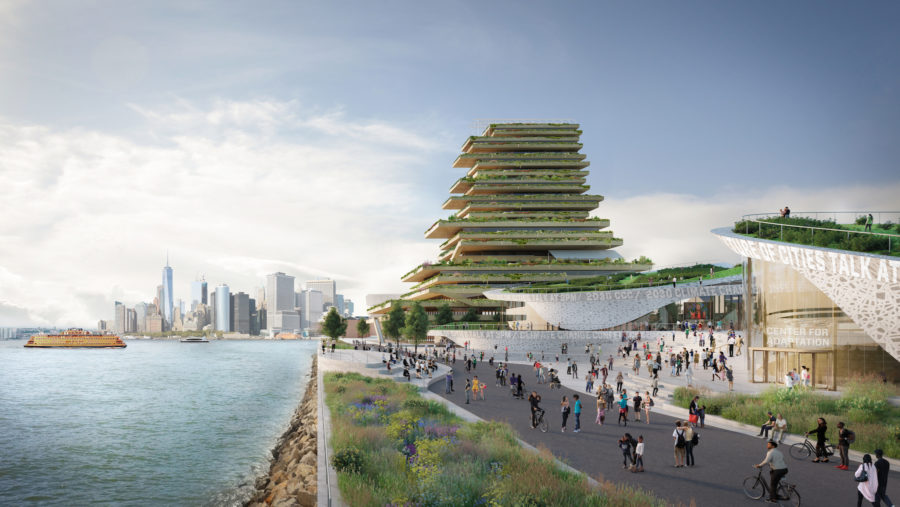 Though many institutions are facing budget shortfalls and may dismiss the idea of expanding, history offers a useful precedent. In the New York Times, Michael Kimmelman notes that “Rockefeller Center broke ground at the start of the Depression; Lincoln Center, when thousands of New Yorkers were fleeing to the suburbs.” And in the aftermath of 9/11, when many predicted the end of tall buildings, city officials plotted an economic turnaround that caused a supertall building boom. New York is at a crucial juncture; perhaps a smart investment into tackling the climate crisis is exactly what the city needs.