The Sri Lankan Escape on a Former Tea Estate

Nestled in the green, rolling terrain of the surrounding UNESCO-protected land, Santani, the country's first wellness resort, is designed for respite. 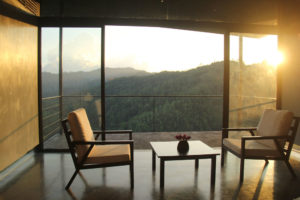 When Santani founder Vickum Nawagamuwage went in search of a location for Sri Lanka’s first sustainable wellness retreat, he had nature’s elements on his mind—particularly wind. “I insisted the site have fresh, cool air for our guests so that we could do without air conditioning,” he says. According to Nawagamuwage, A/C not only creates bad air quality, it can account for up to 70 percent of all energy use in a hotel. The island off the southeastern tip of India is known to travelers for its virgin beaches, but Nawagamuwage sought solitude, so he headed for the interior rainforest.

He found the perfect plot of land 2,800 feet above sea level in Kandy, a verdant town with plantations known for producing the finest Ceylon tea. Upon acquiring a 48-acre abandoned tea estate on the edge of the Knuckles Conservation Forest, a biodiverse UNESCO World Heritage Site, Nawagamuwage’s brief to architect Thisara Thanapathy was steeped in a holistic philosophy. “Architecture that would free the mind,” Thanapathy says of his client’s initial mandate. “He wanted buildings that would put people at ease as much as the natural surroundings and also tread lightly on the land.”

Though not yet internationally recognized, Thanapathy received the country’s Geoffrey Bawa Award for excellence in architecture in 2011. The judges cited the ability of his simple, linear structures to soothe, even within the urban context of the gritty city Colombo, where he’s based. For Santani, his first hotel project, he took cues from Sri Lanka’s landscape, which ancient mariners often mistook for the Garden of Eden. “By relating the buildings and materials to the environment, I knew we could achieve serenity,” he says.

The bareness of the spaces blurs the line between indoors and outdoors, a minimalistic infrastructure which, paired with the absence of modern digital comforts like WiFi and TVs in the rooms, is meant to unburden guests for the wellness programing. The timber grills in Santani’s imposing main structure, recycled from a disused tea factory, are intended to “capture the Zen of traditional Japanese temple architecture,” Thanapathy says. On the ground floor, a dwelling pavilion looks out at the former tea fields that have been regenerated into rainforest thanks to Santani’s tree planting initiative.

The 20 freestanding, Tampita Vihara–style cabins sit atop steel pillars; the elevation generates natural ventilation. The interiors are done up with naturally finished cement walls, headboards inspired by ancient Sri Lankan murals, and chairs upcycled from rubberwood typically used for stoking fires—the overall lack of ornamentation is deliberate, a reference to the 16th-century Buddhist meditation caves found around the island. “It’s designed to minimize external stimulation so guests can focus on slowing down their minds,” Nawagamuwage says. “The structures also serve a vital purpose understood by our Kandyan ancestors: allowing the natural rhythms of the land and its animals to continue uninterrupted,” says Thanapathy.

Down a meandering rubble walkway, the three-level spa is tucked into the hillside’s natural contours. Beneath the humble reception, a glass wall in the cedarwood sauna frames the Knuckles’ jagged tips; in the cocoon-like thermal salt soaking pool, a narrow sliver is cut into the granite, providing a small window to the jungle’s green canopy. At the lowest level, seven treatment rooms open onto the surrounding paddy fields, yoga pavillions, and an organic farm, which supplies vegetables and fruits to the restaurant. An array of healing regimens is on offer, from detox and sleep enhancement to meditation and music therapy. The goal for the guests is the same as Nawagamuwage’s two-year-long hunt for the site: balance. “It has the right energy,” he says.