The fashion designer balances a prolific output with an unwavering attention to craft.

By Tiffany Jow
Photos by Nani Gutierrez
August 29, 2017
Share
Back

Most people know Jonathan Anderson as the fashion world’s prize provocateur: an artful prodigy who once sent men in tube tops, ruffled shorts, and frilly riding boots down the runway with casual aplomb. But his talent extends far beyond making a scene. As the creative director of J.W. Anderson and the Spanish house Loewe, the 32-year-old shuttles between his brand’s headquarters in London and Loewe’s in Paris, as well as the latter’s leather workshops near Madrid, designing 12 collections a year, plus the occasional capsule, all at Snapchat-era speed.

One of the first millennials to helm a luxury fashion house, Anderson’s grasp of the digital metabolism fuels a curious paradigm: Even as he creates a constant stream of new items, he upholds a dedication to craft—meticulously constructed objects that offer relief from our increasingly pixelated world.

“Luxury doesn’t exist anymore,” he says, sitting below a 1970s Richard Smith kite painting in Loewe’s Madrid flagship store. “Nobody cares about luxury. Today it’s more of a lifestyle, it’s about the arts. Each week, the way we consume evolves.”

His boy-next-door appearance, complete with sky-blue eyes and T-shirt-and-jeans uniform, belies his physical presence, which is intense, impatient, and on permanent overdrive. Anderson produces complex, comprehensive ideas at uncanny speed, accelerating with each new project he takes on. For Anderson, rapidity a good thing: it prevents him from getting bored or from overthinking. Massive workloads don’t faze him. He’ll complete a collection in four weeks and move on, he says. “It’s very much like, ‘I like this and I like that, and I want a bit of this and a bit of that.’ There’s no preciousness about it.”

It’s a process that works, and enables his extensive reach. He launched J.W. Anderson in 2008 and added womenswear in 2010, the same year that Sunspel, a 157-year-old British brand, hired him to make its cotton basics relevant again. His brand’s sellout 2012 collection for Topshop ignited a flurry of collaborations, followed by Anderson’s capsule collection for Versace’s diffusion line, Versus, that exuded a slick, overt sexiness foreign to his namesake label. More recently, J.W. Anderson initiated projects with artists such as sculptor Giles Round and potter Joanna Wason, and in July, unveiled a fall line for Uniqlo, featuring his take on classic British heritage garments. At each turn, the designer has dumbfounded critics with his versatility.

In 2013, LVMH bought a minority stake in Anderson’s brand and hired him to lead Loewe. By then, the British Fashion Council had honored him with its Emerging Talent and New Establishment awards, in 2012 and 2013, respectively. It named Anderson both Menswear and Womenswear Designer of the Year in 2015—the first time anyone won both top honors.

Anderson was born in The Loup, a small village in Northern Ireland’s County Derry. He performed in London’s National Youth Music Theatre, and, at 18, moved to Washington, D.C., for an acting program, only to discover that his real passion lay in the production of a show. After moving back to Ireland, he took a job at retailer Brown Thomas, where he met Manuela Pavesi, Miuccia Prada’s late, legendary right hand. Anderson studied menswear at the London College of Fashion while dressing windows for Pavesi, who became instrumental in his decision to pursue design. “Manuela was a strong character who knew exactly what she wanted out of life,” he says. “It was inspiring, this idea of not compromising on anything.” He vowed to start making things—clothes, objects, whatever he could—and founded J.W. Anderson three years later.

The practice of categorizing clothing by gender had long fascinated Anderson, who noticed its guidelines breaking down on the street: people wore what they wanted. To him, a white shirt is a white shirt, unassigned to a particular sex. “It felt like a very nice way to design,” he says of the process, which helped him build the J.W. Anderson man and woman. Though they’ve since grown more distinct, early men’s and womenswear collections featured concurrent elements, like fisherman’s hats, platform oxfords, dresslike trenches, and those notorious ruffled shorts, made for fall/winter 2013 using patterns drafted for women. Anderson deemed the violent reactions they caused a success—they had challenged something in people.

“Jonathan’s first menswear collections were extremely feminine. They boarded on the bizarre,” says Jay Bell, Barneys New York’s senior vice president of men’s ready-to-wear, who has tracked Anderson’s work for more than a decade. “We didn’t see an opportunity to do business with him at that point.” While Barneys eventually took on J.W. Anderson, in 2014, and has carried Loewe since 2015, Bell finds relief in knowing Anderson recognizes the demands of leading two brands at once. “Thank God he’s rooted in reality,” he said. “He can’t carry on at this pace forever.”

Despite its roots as a collective craft workshop in Madrid, Loewe wasn’t on Anderson’s radar when Pierre-Yves Roussel, LVMH’s chairman and CEO, proposed that he lead it. Formed in 1846, Loewe was favored by the Spanish royal family and known for its master leatherwork, but it lacked a coherent narrative. LVMH acquired the brand in 1996, recruiting luminaries such as Narciso Rodriguez and Stuart Vevers to develop its identity. To Anderson, Loewe was a diamond in the rough. “They just needed an entire rebrand,” he says. “How do you make a leather company in Spain not feel like sweaty leather?”

His initial proposal was a book of around 100 images informed by family holidays in Ibiza, complete with a color palette and new leatherworking techniques. It hinged on a 1997 Steven Meisel shoot for Italian Vogue, in which a flock of models hung out on a beach. They weren’t wearing Loewe, and the photographs were nearly two decades old, but his concept resonated as an integrated whole.

“Craft was at the heart of his idea from the very beginning, as was the color, the cultural dimension, the way to play with history—all of those tensions were part of his initial proposal. I found it very powerful,” Roussel says. “It takes much more than great creative talent and vision to build a brand. Very few people have that, and Jonathan stands apart from most of them.”

Anderson distilled Loewe’s history to its strengths—blue-chip craftspeople, cutting-edge technology—and put it in a contemporary context, subverting the tradition of luxury brands touting their august heritage. “I want to turn Loewe into a cultural brand,” he says. “Some of the world’s most talented people make our bags, so it’s not nostalgic. It’s the future. Young people don’t want nostalgia. They want to know the history of the brand, but they want it to be current for today.”

In an age of fast fashion, maintaining a dedication to craft is Anderson’s holy grail. And the objects he creates speak for themselves. Anderson’s bestselling Puzzle bag, made from 41 individual leather pieces with hand-painted edges, has a faceted, geometric form that folds totally flat: an ingenious marriage of craft and design.

“Other brands defer to more decorative solutions of product.” Bell says. “I think it’s necessary for Jonathan to create. That’s what makes him happy, and what makes him tick. He speaks a mile a minute, so it’s hard to get a word in. But he has so many ideas, you almost don’t mind not interrupting him when he’s talking. Everything is so interesting and relevant to how we live now.”

Anderson’s overhaul left nothing untouched, including hangers and pencils. With an in-house architect, he redesigned stores and gut-renovated the Paris HQ. New packaging was based on Portland stone, a reference to the British Museum’s facade and his fondness for modern British art. Forgoing shop fittings, Anderson invested in an art collection through the Loewe Foundation, the brand’s three-decades-old philanthropic arm, displaying his carefully selected acquisitions (William Morris wicker chairs, a Howard Hodgkin print, vessels by Edmund de Waal) among his clothes.

Such a high level of personal involvement is rare for creative directors. Roussel told me they usually prefer to reimagine stores with an established architect, and bring in specialists to assist with visual merchandising. “But Jonathan does everything,” Roussel says. “He loves it. So he’s looking at auctions and catalogues, visiting with collectors. He’s picking up all of these things himself.”

Anderson also introduced the Loewe Craft Prize, an annual award that honors a working, precedent-setting artist in the field. Last April, from a pool of some 4,000 submissions, a jury including Gijs Bakker and Patricia Urquiola selected wood artist Ernst Gamperl as its inaugural winner. Gamperl told me this kind of recognition for craft, with a €50,000  prize (nearly $59,000), was unheard-of. “Jonathan has given the foundation a global scope and international dimension,” says the foundation’s president, Sheila Loewe, noting its commissions for Art Basel Miami Beach and Salone del Mobile. Suddenly, Loewe had a voice in a broader conversation.

Anderson’s personal art collection, which has spilled into a London storage space, rotates around his Victorian townhouse like an evolving carpet sale. Even before his meteoric rise, the arts and crafts movement fascinated Anderson, who started buying works by William Morris and Charles Rennie Mackintosh, then expanded from there. So when Yorkshire’s Hepworth Wakefield gallery invited him to curate its spring exhibition this year, he took it as an opportunity to give viewers a glimpse into his MO: pinpoint masterfully made objects, then fold them into fashion, generating depth and new ideas. Titled “Disobedient Bodies,” the exhibition juxtaposed clothing with objects from the institution’s collection, prompting a dialogue between the two. Anderson paired Jean Paul Gaultier with Henry Moore, Comme des Garçons with Brancusi, Issey Miyake with Noguchi.

“At Loewe, Jonathan designs a complete universe around the clothing told through design and craft, art, and music,” says chief curator Andrew Bonacina, who worked closely with Anderson on the show. “He’s not just a designer. His approach is very much that of a curator: about bringing things together, resulting in rich conversation.”

Asked why he continually accepts invitations to expand his workload, Anderson shrugged. “Maybe I force them into it,” he quipped, then quickly grew serious. “I love to work. I could do four brands if I had enough time. It’s about making them airtight so they can see out the future.” 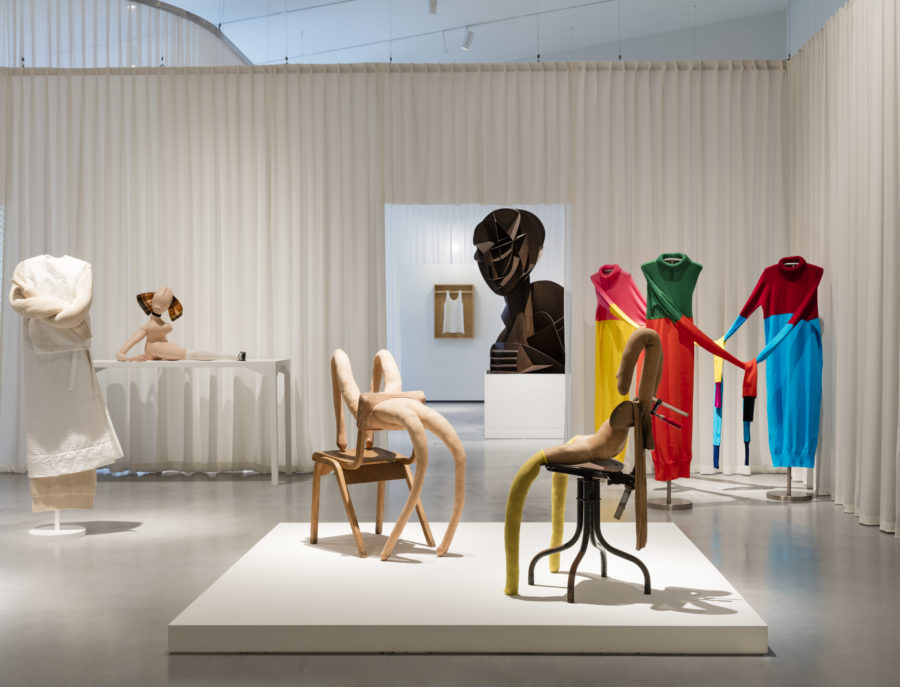 Surface and Polygon Explore the Intersection of...