Art dealer Margherita Stein was a pioneering champion of the Arte Povera movement in the ’60s. But you might not have known it at the time. She called her Turin, Italy, space Galleria Christian Stein, using her husband’s name to gain legitimacy in an era of prevailing sexism. She was an early supporter of Giovanni Anselmo, Alighiero Boetti, and Michelangelo Pistoletto, among others, often buying her favorite works for her own collection. Stein is an inspiration to Nancy Olnick and Giorgio Spanu, who recently opened Magazzino, a 20,000-square-foot exhibition space in Cold Spring, New York, dedicated to their private collection of postwar and contemporary Italian art. The name means “warehouse” in Italian, and the space was in fact an industrial building before a renovation and addition by Spanish architect Miguel Quismondo. It opened in late June with an exhibition titled “Margherita Stein: Rebel With a Cause.”

Olnick, like Stein, is a charismatic character. She travels with elegance and poise through the galleries, and speaks with zeal about the art around her: “It’s pure poetry,” she says, pointing to a work by Jannis Kounellis. “I had a model at my house of the galleries with individual pieces of the art,” Olnick says. “It was basically my dollhouse for the last six months.” In one room, Olnick and Spanu carved out a window just to be able to install Luciano Fabro’s marble sculptures: “Sylvia [Fabro’s daughter] said it had to feel like it’s coming in from outside,” she says. And in another space, they placed a Mario Merz sculpture of a taxidermic reindeer head on top of a window overlooking the garden. (The day I visited, a local deer appeared just outside the glass.)

The husband-and-wife duo installed each piece to foster dialogues among them and with their surroundings, working with Magazzino’s director, Vittorio Calabrese. At the entrance, a Giuseppe Penone marble-and-glass sculpture of a fingernail emphasizes the relationship between man and nature: “The nails contain those outside-world components in your body,” Calabrese says. “We wanted to install this work outside to create this direct connection between the building and nature.” Magazinno’s newly built galleries, nearly twice the height of the existing building, have a ceiling made almost entirely of skylights, allowing the quality of the daylight to affect the experience of the work.

The couple’s interest in Arte Povera started at Castello di Rivoli, a contemporary art museum in Turin that houses a large collection of postwar Italian art. “It blew us away—we are just enamored,” she says, referring to how artists associated with the movement reflected on wealth, consumer culture, and the human condition. Soon they started acquiring pieces, some of them from Stein’s own collection.

They hope Magazzino will introduce postwar Italian art to an American audience. Located along the Hudson River, the space is a 20-minute drive from Dia:Beacon, the museum supporting minimalism, which reached its peak in America during the same period in which Arte Povera was emerging in Italy. Also committed to supporting contemporary artists, the couple has devoted the last gallery in the space to up-and-comers, and an entire room to a library with more than 5,000 volumes on the period. Even to Olnick, who lived with some of these works at her home just a short drive from the warehouse, the pieces gain new meaning in the space’s context. “Now that I get to see this all assembled and I walk through it, I feel like I learn something new,” she says. “It’s a constant education.” 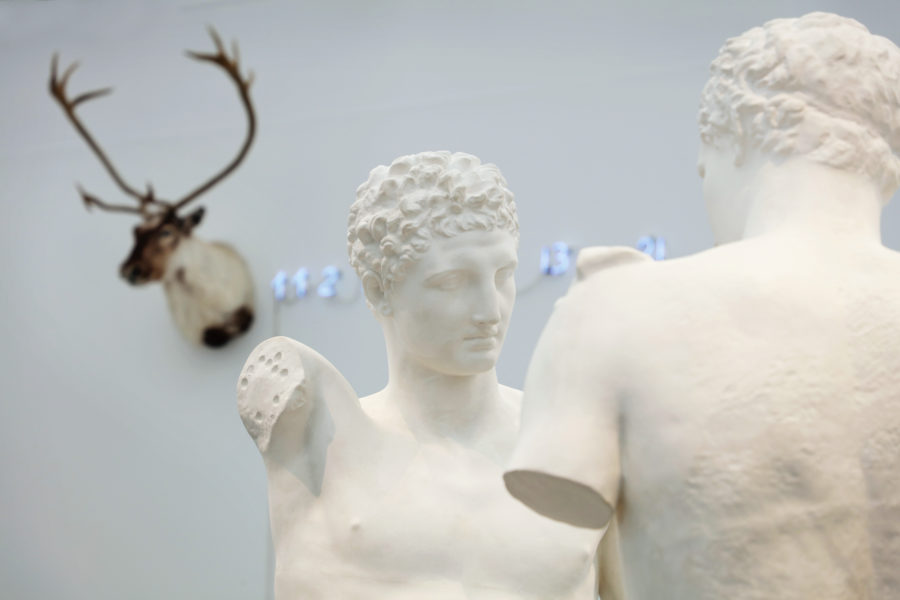