Along with the veteran firm, Dorte Mandrup and WEISS/MANFREDI have offered proposals for rehabbing the 12-acre site in Downtown L.A.

For generations now, the La Brea Tar Pits have been a beloved, if often campy, fixture on the Los Angeles cultural landscape. Once noted as a home for odd, half-sunk mockups of ancient creatures, it has become a somewhat more serious educational resource and, through artistically-minded projects such as the Second Home Pavilion series, a more valuable asset in Downtown L.A.’s continuing evolution—even the site and its environs seem a little long in the tooth (it’s been 40 years since any considerable renovations).

Today, the Tar Pits’ parent institution, the The Natural History Museums of Los Angeles County (NHMLAC), has offered up three variant design schemes for the site’s rehabilitation into something that reflects not only its existing functionality, increased cultural footprint, and the overall ascendence of the downtown arts area (the Tar Pits abut LACMA), but its odd place in the hearts of many Angelenos.

The result of a request for briefs earlier this year, the concepts come from a trio of veteran studios:  Diller Scofidio + Renfro, Dorte Mandrup, and WEISS/MANFREDI. All the offerings are tasteful, contemporary, and inviting, offering cheeky nods to the site’s past while opening it up to additional possibilities. As well, all are preliminary—the NHMLAC was clear in stating this—but the beginning of a process that will include input from experts in natural history, architecture, and a public that is currently very concerned about the fate of one particular, beloved mammoth. See images from the proposals below. 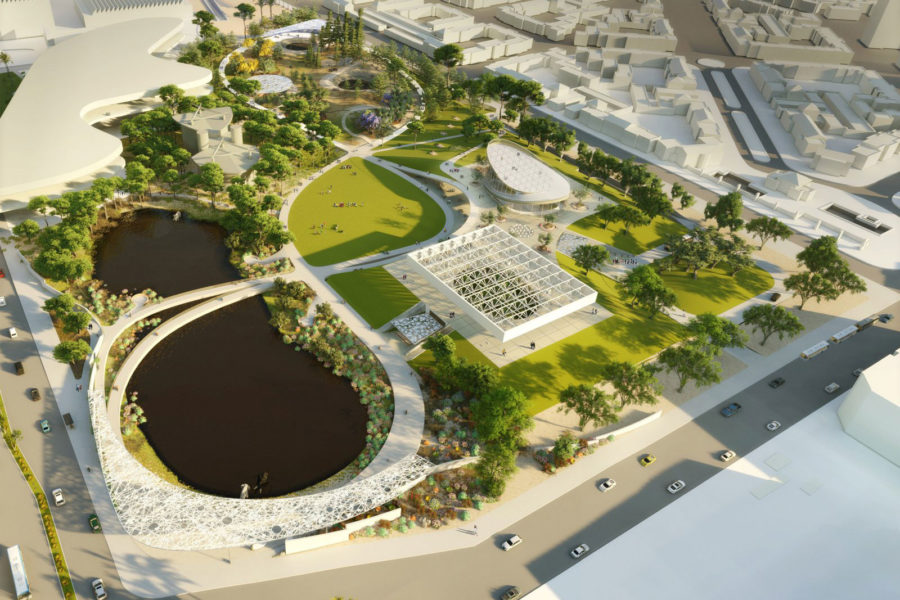 A “Safe and Welcoming” NFT Marketplace for...

Of Course Telfar’s Wallets Sold Out Within Seconds,...

Canada Goose Is Collecting a Trove of Inuit Art, and...

Mexican Craft Shines at a New Boutique Hotel in...

Chicago’s Bell Works Gets an Airy Refresh, and Other

In Madrid, an Offbeat School Uses Architecture to...

The Curator of EMMA's Exhibition on Michael Jackson Addresses the Controversy