The Curator of EMMA's Exhibition on Michael Jackson Addresses the Controversy

The Espoo Museum of Modern Art is the latest to present “Michael Jackson: On the Wall,” a showcase of 48 artists influenced by the controversial music icon.

The Espoo Museum of Modern Art is the latest to present “Michael Jackson: On the Wall,” a showcase of 48 artists influenced by the controversial music icon.

A lot can be said about Michael Jackson. He was a singer, songwriter, and dancer that revolutionized entertainment through chart-topping hits that stand the test of time, thrilling megawatt concerts, and music videos, all of which subsequent generations of performers have tried to emulate since his passing in 2009. The way he took hold of the zeitgeist—becoming the self-titled King of Pop, and attracting a global fandom—is a feat seldom achieved, so much so that his legacy extended beyond the music industry, inspiring the greater art world. It is also the subject of “Michael Jackson: On the Wall,” a touring exhibition that has come to the Espoo Museum of Modern Art (EMMA) in Helsinki, Finland in August 2019. The showcase made its debut at the National Portrait Gallery in 2017, and was followed by stints at the Grand Palais in Paris in November 2018, and the Art and Exhibition Hall of the Federal Republic of Germany in March 2019.

Any treatment of Jackson’s legacy, however, must be balanced against his eccentric behavior, penchant for cosmetic surgery, and, most crucially, the allegations of sexual abuse of minors levied against him. Following decades of rumors, lawsuits, and the claims put forward by a number of alleged victims in  2019’s Leaving Neverland, it is hard to discount these horrific charges, even if his creative output was—and still is—immensely influential. For many, the superstar is now a villain. 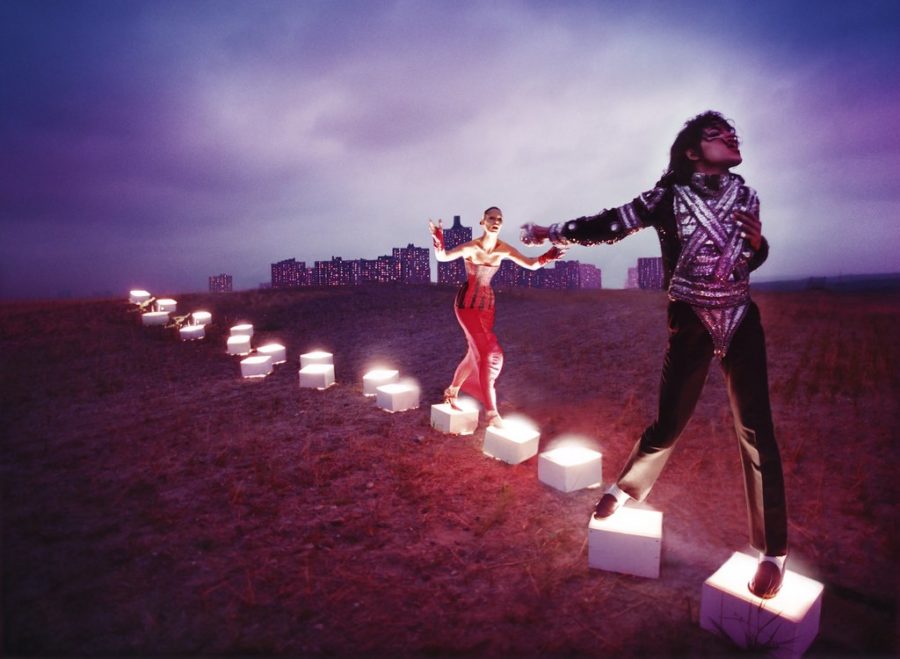 Still, fine art institutions continue to house “Michael Jackson: On the Wall,” which, on paper, could appear like a celebration of his legacy. But according to Arja Miller, the curator of the exhibition at EMMA, it is less of a tribute to the man, and more of an exploration on how some of the biggest names in the fine art world saw Jackson as a muse, creating works that comment on his significance in shaping the culture over the decades. It also raises questions about whether or not one’s reputation as an artist can be separated from the way one conducts themselves behind closed doors—a conversation that the EMMA welcomes.

This is perhaps why the previous tours of “Michael Jackson: On the Wall” haven’t received the full ire of the masses, and why the latest iteration shouldn’t either. From paintings by Kehinde Wiley and Andy Warhol, to photographs by David LaChapelle and Todd Gray, to tapestries by Faith Ringgold, the pieces in the exhibition at EMMA are displayed in a dimly lit space, and are masterfully juxtaposed to highlight themes of celebrity, its highs and lows; identity, and the way the masses dissect and disseminate a cultural figure. And, depending on how a viewer perceives Jackson, the vibe could either come across as introspective, congratulatory, or downright sinister. Like his life and music, it is completely open to interpretation.

Here, Miller elaborates further on EMMA’s turn at “Michael Jackson: On the Wall.”

How do you think Finnish people view Michael Jackson?
In many ways, I guess. The relationship probably varies from intense fandom to indifference. But the thing about Michael Jackson is that everybody knows him. He is recognizable in a way that I don’t think anyone else is.

What are the differences between the “Michael Jackson: On the Wall” that took place last year at the National Portrait Gallery and this one at EMMA?
The exhibition at EMMA includes additional works by Paul McCarthy, Pamela Rosenkrantz, and Rose Wylie. We have also modified the themes in the exhibition to suit EMMA’s large and distinct exhibition space and our audience. The original 12 themes are condensed to seven key themes that bring out the diversity of the exhibition. The themes are: Cultural Meaning, Time Capsule, African-American Identity, Many sides of Fandom, Behind the Mask, King of Pop and Body on the Move.

What was the reason for bringing the exhibition to EMMA, and when did the idea happen? Was it before the release of the Leaving Neverland documentary?
The collaboration started approximately three years ago, long before the release of Leaving Neverland. What we found intriguing was the impressive list of leading contemporary artists from different generations from all over the world, and the range of themes they have examined through Jackson’s globally known character. The exhibition shows almost 100 works from 48 artists all together.

How would you describe Michael Jackson’s impact in the art world? Why do you think he was a muse for so many artists over the years?
As this exhibition shows, artists have been fascinated with different sides of Jackson throughout his life and still on to this day. He was, and still is, a complex character and undeniably also a talented performer and artist. The emphasis in the exhibition is, however, on the artists’ multiple interpretations on Jackson as a cultural icon, and how its reading has changed over time.

Can you describe how a few artists interpreted him in their works?
Romanian artist Dan Mihaltianu, for example, uses Michael Jackson as a symbol of freedom and Western capitalism. He analyzes the impact of The Dangerous Tour in 1992 on post-Soviet culture by juxtaposing the tour’s iconic masks with paper cutouts of Romanian people of that time. American artist Todd Gray has seen Michael Jackson as a diasporic subject in his works. Gray was Jackson’s personal photographer back in the late ’70s, and has recontextualized his original photos ofJackson by covering them partly with images he has taken from Ghana. And then there’s an American artist Michael Gittes, who separates Jackson’s movement from his music insightfully by adapting the short film “Smooth Criminal” to Sinatra’s “Fly Me to the Moon.” These are only three examples. Each artist interprets Jackson through their own perspectives and examines themes like race, gender, fame and equality.

Do you think his cultural contributions are tarnished because of allegations of pedophilia?
It is such a complex question. I only know that Michael Jackson’s impact on music, dance, fashion and also on contemporary art has been absolutely huge, and it will also be so in the future.

Can an artist’s creative output be separated from their personal life, or should they be judged for how they conduct themselves privately?
Our time is very sensitive, and that is a positive thing. This is a topical question—not only in the art world. I don’t have a straight answer to it. Just by looking at the exhibition, you can see 48 relationships with a global phenomenon that are quite different from each other. As an art institution, we are not trying to give a one-dimensional answer. We want to enable discussions, and we still see this exhibition as relevant in that sense. The works displayed aren’t Jackson’s works, so the question is more about art in context and how interpretations can change in time. After all, it’s about his impact in society, seen by a bunch of different artists.

How is the museum addressing the controversy?
Instead of taking sides or cancelling the show, we want to remain a platform for discussions, even difficult ones. In EMMA’s program we have discussions on subjects like fandom and the dynamics of power, and also DJ nights, where Jackson’s music is presented within the framework of 20th century entertainment culture.

How did you go about curating works, and planning the layout to reflect that?
The exhibition was originally curated by Nicholas Cullinan from the National Portrait Gallery in London and he had already done an excellent job of researching and finding so many wonderful works about Michael Jackson in the history of art. My job was to go through the very rich and extensive material and make sense of it in our modernist, large space, to give context and build relations between the different works to create a certain dramatic flow to the exhibition in our space. Also, as we have a very large, open space, I wanted to add some sculptural and other large-scale works to the show.

What is the message you’re trying to convey with this exhibition?
EMMA is a museum for modern and contemporary art. This show exhibits a worldwide phenomenon that is part of the art history of our time. When you see the exhibition, you can understand that the artworks and the themes in the show explore our culture and time as much as they explore Michael Jackson in all his controversy.

“Michael Jackson: On the Wall” will be on display from August 2019 to January 2020 Espoo Museum of Modern Art in Helsinki, Finland.