The latest jewel in the Edition Hotels crown tastefully nods to the city’s cultural heritage while supplying some international pizzaz courtesy of architect John Pawson and chef Enrique Olvera.

Trusting his gut always yields Ian Schrager’s most distinctive work, from the early days of Studio 54 to the debut of the Mondrian hotel in 1996, a milestone in the revitalization of West Hollywood. Over the past decade, the nightlife powerhouse has revved the engines behind the Edition’s rapid-fire global expansion, with new properties slated for Doha, Rome, Dubai, Singapore, and Nashville. The latest, in Madrid, is a sophisticated hotel that dials into the city’s history while bringing a welcome cool to its more buttoned-up tendencies. Like fellow Edition properties, the outpost in the Spanish capital doesn’t shy away from taking risks. It rushes headlong into Schrager’s proven ideals of combining intimate moments with a reverence to its home city’s traditions, distinguishing it from the city’s recent crop of upmarket hotels like the Four Seasons, Mandarin Oriental, and Rosewood.

Throughout the property, Schrager swings big and hits. “It’s much more than merely a place to sleep,” Schrager says. “It’s a true hub of popular culture, entertainment, and social interaction that is a microcosm of the best of Madrid and perfectly captures the city’s spirit and essence.” The “wow” moments unfurl upon entry, where guests ascend a floating, ribbon-like staircase toward the lobby’s lofted lounge. Credit the serene vibe to British architect John Pawson, who blanketed the entire space in the same crisp neutral finishes and creamy bouclé fabrics that made his previous Edition outing in West Hollywood a standout in L.A.’s high-wattage hospitality scene.

One may expect a visual cacophony when combining Pawson’s pared-down eye with Parisian interior designer Francois Champsaur’s penchant for colorful gestures, but Schrager brings balance to the force. “Ian and I have been working on projects almost continuously for the past two decades,” Pawson says. “When you collaborate with someone for this long, a deep and instinctive mutual understanding develops. At the same time, we still retain the capacity to surprise each other, which helps to keep the creative thinking fresh.”

Those surprises linger throughout—deploying them with a subtle touch is one of Schrager’s greatest talents. Making room for both the coffee and cocktail crowds, the lobby is an all-in-one place and the hotel’s beating heart. It can pivot from a quiet sit-down spot by day to a place where revelers chill out after an evening in the Punch Room spent sipping agave spirits on Jean-Michel Frank armchairs and selfie-ing in the show-stopping bronze-polished mirror by Parisian studio Garnier & Linker. They can also be found shooting a game of late-night pool on a shapely blue-felted table, which designer Emmanuel Levet Stenne sculpted from a single slab of white Bianco Neve matt marble.

Madrid’s influence—especially that of a nearby 16th-century monastery—is felt throughout, tempered by Pawson’s serene touches. The back entrance, on Plaza de la Descalzas, is embellished by an 18th-century baroque portal designed by Spanish architect Pedro de Ribera and salvaged from an adjacent building. Pawson sculpted plaster headboards in the 200 guest rooms and two penthouses in the same shape as the portal and backlit them for dramatic flair. They’re a striking centerpiece in his pristinely appointed rooms, whose minimalist flourishes evoke a spa-like oasis. (The Edition’s signature plush microfiber robes and custom-scented Le Labo products are on-hand, as always.) “Every time I visit Madrid, I’m conscious of its cultural intensity. It has a particular energy and a strong sense of place,” he says. “I wanted to make somewhere with an equal but different intensity—calm spaces to withdraw to, but also an environment charged with its own life and identity.”

One such space unfolds downstairs, where a radiant pink hallway leads to Jerónimo, a vibrant restaurant spearheaded by master chef Enrique Olvera of Mexico City’s Pujol and New York City’s Cosme, both of which appeared on this year’s list of the World’s Best Restaurants. On the Mexico-inspired menu: chicharrones, aguachile de mariscos, and huevos rancheros. The influence of another one of Mexico’s favorite sons, Luis Barragan, is felt in the tropical magentas with luminescent Yves Klein blue and the lounge bar’s soothing green marble. 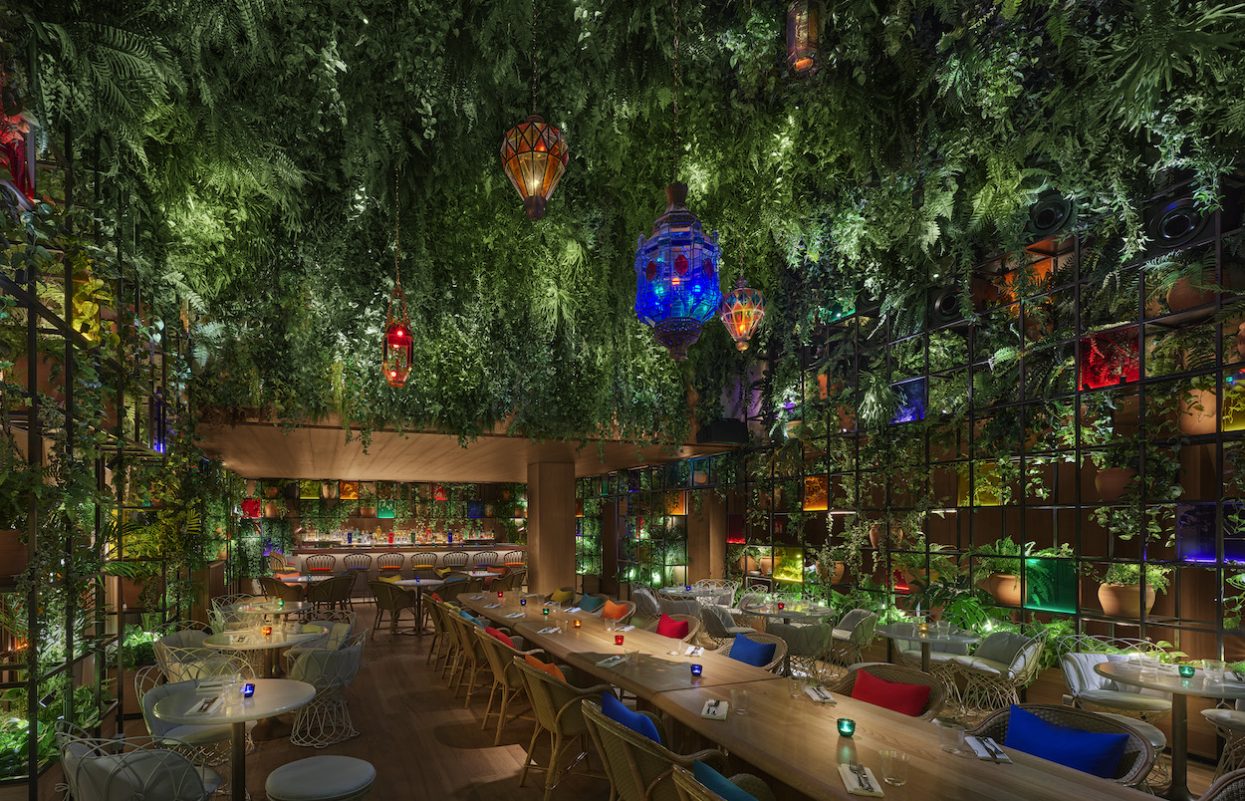 The world-class food and beverage program continues on the rooftop, where the mood lightens at Oroya, a restaurant that fuses classic culinary techniques from Spain and Peru by chef Diego Muñoz of Astrid y Gaston fame. There, guests will find a family-style tapas menu—ceviches, papa rellena, and ha-kao on parihuela broth—and a wine menu selected by sommelier Julio Barluenga or Pisco-led cocktails. Nestled in a giant blackened steel cage, Oroya feels like a bona fide greenhouse thanks to climbing foliage and lustrous glass panels. Its terrace spills out onto the rooftop, home to a vine-covered pergola, a long oak table for lazy lunches, and Madrid’s largest rooftop pool. There’s no better place to rest up and lay out before getting ready for the nighttime festivities—under Schrager’s watch, the Edition always brings a party.

In the Catskills, Minimalist Cabins and a Scandi-Style