A boutique design studio infuses the Omakase Room by Tatsu with a subtle mix of color, scent, and texture.

Hidden in a basement beneath a French bistro in Greenwich Village, a new Japanese restaurant is captivating New York’s sushi purists with more than just taste.

Fashioned of blond bamboo and hinoki wood, the Omakase Room by Tatsu is a bento box of a sushi counter with only eight seats. It’s a small stage for a big presence: Tatsuya Sekiguchi, a third-generation Japanese chef who previously helmed the kitchen at Sushi Yasuda in midtown Manhattan, where he and a half-dozen other chefs won praise for their no-frills approach to sushi-making. At Omakase Room, opened in July, Sekiguchi goes beyond taste—the 18-course, chef-driven menu reflects a century of practice, established in Tatsu’s family restaurant in Hasuda City, Japan—into the realms of smell, touch, sight, and sound, teaming up with Savvy Studio, a young practice with offices in New York and Mexico City, to craft an enveloping experience.

Rafael Prieto, the firm’s cofounder and creative director, turned to his friend and Parisian perfumer Barnabé Fillion, a frequent collaborator with the skincare brand Aesop, for a range of house fragrances that change along-side the menu each season. Hinoki, a tree species used as building material for sacred temples, is the aroma for fall. “Its conifer wood cleans the air, and the bark naturally has fragrant essential oils,” Prieto says. Guests will detect the scent in the towelettes passed out upon their arrival. In the queue for winter: sugi, the national tree of Japan.

Fillion’s wife, Perla Valtierra, a Mexican ceramist and scholar of Japanese clay technique, designed custom pieces for patrons to take home. Cast in red, white, blue, or black, each disk is dipped in all-natural paint, tinted by the pigment of raw vegetables, and soaked in Fillion’s fragrance for 21 days. Each disk is placed in a small translucent envelope bearing a note about “tradition, senses, and season” in muted gray text inspired by Japanese calligraphy. It’s one of the few places where you’ll see any branding at all. Another is the menu.

Printed on thin, rice-colored paper, the raw fish selection is presented in refined, traditional Japanese typefaces in a dusty charcoal. Nothing is too white, or too black. And, with no music playing during dinner, a meditative focus on taste governs the mind. “The whole idea was to frame Tatsu in an environment that feels as natural and neutral as possible,” says Prieto. “So we needed something very subtle and muted, but tangible. A brand with-out distraction.” 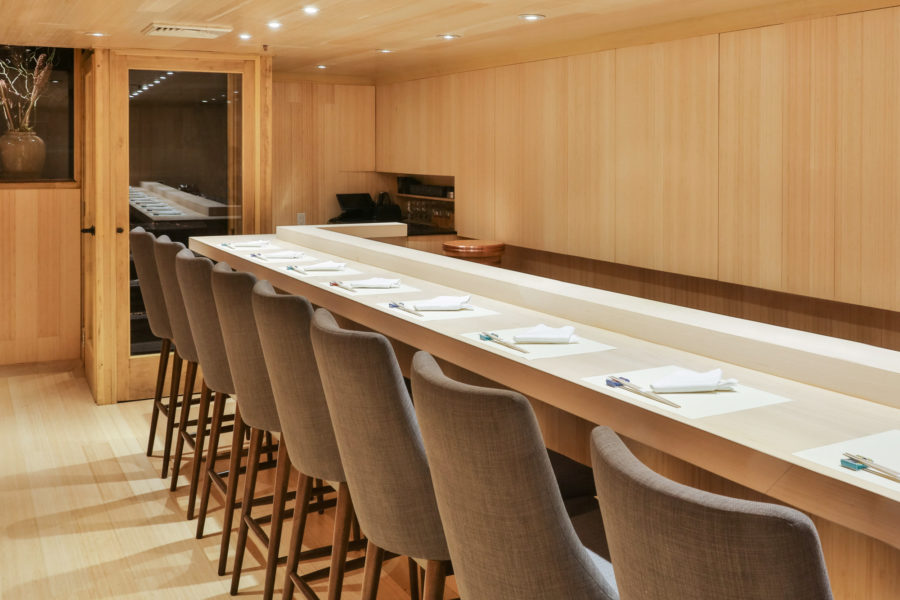 5
Travel
Inside Omakase Room by Tatsu
…