Object & Thing teams with galleries Blum & Poe and Mendes Wood DM for “At the Luss House,” a showcase of contemporary art and design pieces at the former Upstate New York residence of architect Gerald Luss.

Gerald Luss is perhaps best known for his inimitable influence on large-scale corporate architecture and interiors during the postwar building boom in Manhattan. He’s particularly noted for the innovations that he developed for the 350,000 square feet of interiors for the famed Time-Life Building (1959) in Midtown—an epitome of midcentury skyscraper design commonly recognized today as the backdrop to AMC’s acclaimed period drama Mad Men. (Think lots of glass, dark wood desks, and Eames swivel chairs.)

His own home in Ossining, a sleepy village along the Hudson near New York City, became his first freestanding project and where he lived while working on Time-Life. He built the house from prefabricated components assembled on a system of his own design, and it includes handcrafted details such as built-in shelving, cabinetry, and exposed cedar, macassar ebony, and teak wood planks that remain vibrant today. The home hosted numerous planning meetings between Luss and Time-Life staff and employs similar indoor-outdoor experiences as well as shared material and color schemes.

Though the residence is an indisputable design hallmark, it remains relatively overlooked in the vast canon of midcentury architecture. That may change this spring, when the home will host an array of newly created contemporary art and design pieces as part of a site-specific exhibition organized by Blum & Poe, Mendes Wood DM, and Object & Thing. “At the Luss House,” on view May 7 through July 24, features work from 18 international artists such as Alma Allen, Green River Project LLC, Lucas Arruda, Ritsue Mishima, and Frances Palmer that responds to the house’s distinct design details.

For the organizers, the show marks a second act after teaming up for a similar presentation this past fall at the home of industrial designer and Harvard Five architect Eliot Noyes. “We wanted to find another opportunity to bring together contemporary art and design in an architecturally significant setting with a story that we could share,” says Abby Bangser, founder of Object & Thing. “Gerald Luss is a visionary architect and designer whose work has had a tremendous impact on the organization and design of corporate interiors. As we’ve been working on this exhibition, we’ve been in dialogue with him, which is a true privilege to be able to actively learn from him as we recognize and share his vision along with the artists and designers we champion.” 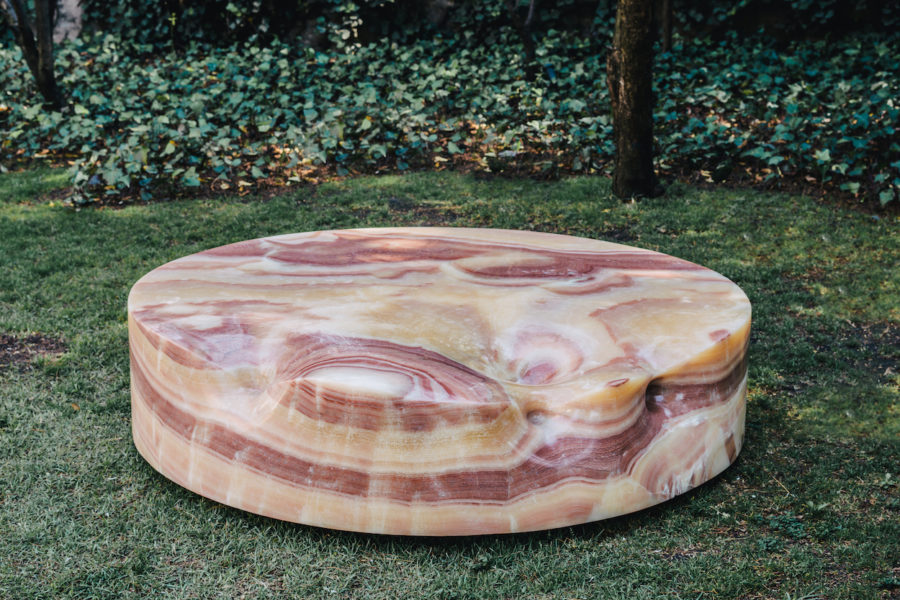 Though few may have set foot in the Time-Life Building in its heyday, connoisseurs of midcentury architecture will quickly find common ground between the two projects. “The primary rationale for architecture is the universal need for shelter from the elements of nature, and that purpose is best served when a sheltering skin and interior needs are conceived and realized as a unitary entity,” Luss tells Surface about his approach. Both spaces noticeably share a strong indoor-outdoor connection achieved by floor-to-ceiling windows. For the Time-Life, Luss created an original design concept called the “Plenum system”—a novel ceiling, lighting, and movable partition system of wood and colored panels that offered flexibility within the workspace. At the Luss House, the hallway cabinetry’s colored panels mimic the design elements found within the office building.

Art also played a key role—Luss envisioned the tower’s interiors so as not to overpower two murals by Josef Albers and Fritz Glarner that mark the entrance. The same forces play into Luss House, making it a backdrop bar none for the design talents highlighted in the show. Luss would agree: at 94, he stepped up as a collaborative partner in the exhibition, lending examples of his own furniture and design to show alongside contemporary pieces.

“It’s satisfying to have this exhibition infuse new life in the home I designed for my family at the onset of my career and to see new generations of artists and designers bring their contemporary perspective into the space,” Luss says. “In my own life and work, I find it essential not only to create work daily, but to also live among the objects and work of other artists, expanding my vision of the world.”

Designer of the Day: Caine Heintzman

The Dia Art Foundation Is Reopening in Chelsea

A Memorial to Victims of Gun Violence, Told Through...

Designer of the Day: Irina Razumovskaya

Designer of the Day: Konekt Furniture

The Art Market Shrank 22 Percent Last Year, and Other News