You Want the Moon? This Remarkably Detailed Lunar Globe Replicates the Real Thing

NASA imagery and expert engineering informed this ingenious lamp, where a ring of LEDs illuminate a tactile, 3D-printed sphere.

NASA imagery and expert engineering informed this ingenious lamp, where a ring of LEDs illuminate a tactile, 3D-printed sphere.

As part of his thesis project at the Royal College of Art, Oscar Lhermitte installed a series of outdoor constellations—made of string and LEDs secured between neighboring trees some 65 feet overhead—around London. After graduating, he discovered images from NASA’s Lunar Reconnaissance Orbiter mission depicting the surface of the moon—and wondered if there was enough data to replicate it on earth.

His most recent project, the Moon Lamp, is a 3D-printed lunar globe that depicts the real thing’s nooks and crannies at a 1:20-millionth scale. A ring of LEDs orbits the sphere, showing the phases of the moon in real time. The Moon Lamp has three settings: live (synchronized with the actual moon), manual (pick the lunar phase to see), and demo (observe a synodic month in 30 seconds). The first is most alluring: used in the dark, the lamp projects a circular shadow onto surrounding walls that silently sails around the room.

“No one has done this before, at least not to an accurate level,” the French designer says. Astronauts and astronomers typically use two-dimensional digital data, while the most accurate existing lunar globe, thought to be the Sky & Telescope Moon Globe, which uses images from the same NASA mission, pinpoints major landmarks on a smooth surface. So when Lhermitte cold-emailed his idea to NASA, it was happy to support the project. He was soon connected with the German Aerospace Research Center, which gave him access to its internal database of satellite imagery, and Lhermitte set to work.

He began by creating an authentic 3D model of the moon. Lhermitte imported the NASA photos into CAD software, translating the images’ gray patches into topographical data that was then fed into an industrial nylon 3D printer; the printed, dimpled orb was used to make a mold. (To produce the most detailed casting possible, Lhermitte worked with a local art fabricator that specializes in mold-making to better understand the science behind it.) Each Moon Lamp is roto-cast in Lhermitte’s London studio using pigmented polyurethane resin, resulting in a snowy, concrete-like hue.

Of course, the moon is nothing without the sun. Lhermitte tapped his college friends Alex Du Preez and Peter Krige, now engineers at the design firm Kudu, to replicate the way solar light falls onto the lunar landscape, as seen from earth. They built and coded a custom computer that controls the motion of an LED-lined ring, which extends from the globe’s steel base via a CNC-milled, aircraft-grade aluminum arm, and mimics a real-time lunar month. “The computer has the same memory as the Apollo guidance computer used by Neil Armstrong—about 64KB,” Lhermitte says.

Lhermitte and Kudu launched a Kickstarter campaign for the Moon Lamp last year, and quickly sold all of their 300 spheres. Now, it’s available exclusively at MoMA’s Design Store locations and online, straddling the line between science and art. Like the moon itself, an immortal quality is built into Lhermitte’s lunar globe. Its algorithm doesn’t require WiFi or a battery—simply plug it in, and switch it on. “That’s the beauty of it,” Lhermitte says. “In 20 years time, it will still work.”

For more information, go to store.moma.org. 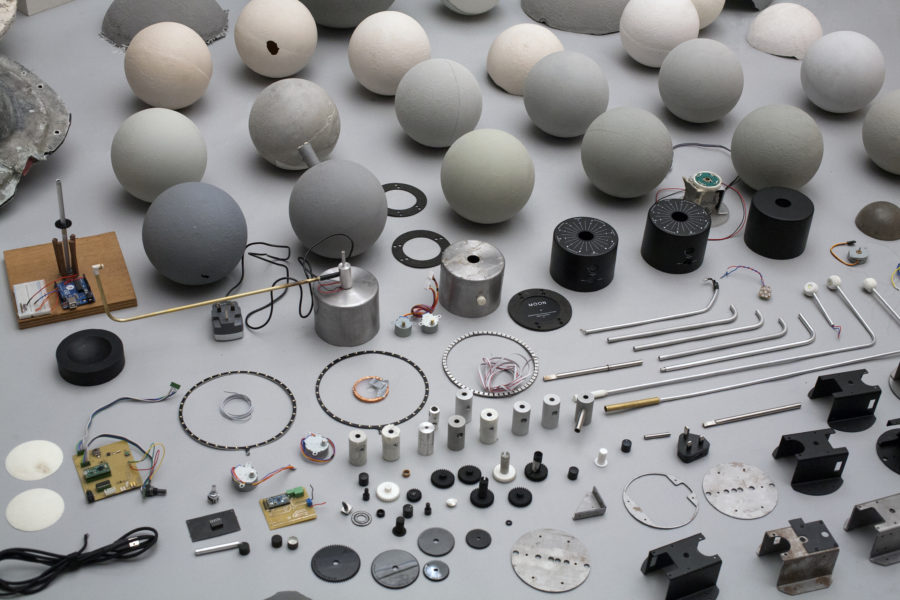