Oui Design's 2018 Lineup is a Force of Creative Collaboration

This year's programming during NYCxDesign continues to inspire innovative projects between American and French designers and manufacturers.

By Janelle Zara
Produced by Surface Studios May 10, 2018
Share
Back

Originally launched in 2016, the cultural program Oui Design returns to New York for its third edition this spring with new collaborations at the Noguchi Museum in Queens and WantedDesign in Brooklyn. A celebration of the mutual affinity in the field of design among the respective cultures of France and the United States, the program is a concerted effort between the Cultural Services of the French Embassy in the United States and a network of respective local partners involving key players in design.

With a dynamic series of events taking place throughout New York during NYCxDESIGN, the program presents cultural collaborations, bringing works that exemplify savoir faire from both sides of the Atlantic. WantedDesign’s robust roster of programming this year includes Camille Walala’s biggest-ever commission in New York, a bold, monolithic mural on the facade at the fair’s home in Sunset Park’s Industry City; a reboot of François Azambourg’s groundbreaking Douglas vase, conceived with the French glass research center CIAV, designer Leo Tecosky, and the Brooklyn Glass team; COULEUR, a showcase of three emerging French designers’ use and treatment of color. To shed light on sustainable development, WantedDesign and Oui Design will also present an exhibition of works by students from EnsAD School in Paris focused on bamboo.

Also this year, the Noguchi Museum is partnering again with Oui Design, through a duo exhibition showcasing Isamu Noguchi’s Akari light sculptures, along with a selection of 26 Akari-inspired lamp designs created under the leadership of Valérie Maltaverne’s Ymer & Malta studio. And a touring exhibition featuring 40 masterpieces of the 21st century in poetic scenography by Jean-Charles de Castelbajac at ICFF.

“Akari Unfolded: A Collection by YMER&MALTA”

On the occasion of the 10th anniversary of the Douglas vase, François Azambourg and the artisanal glassblowers of CIAV created new shapes and scales for the Douglas series, launching them at the Museum of Decorative Arts in Paris before bringing them to WantedDesign Brooklyn. On view from May 19 through May 22 will be the pieces, their blueprints, and the new works from the Douglas series, made in collaboration with designer Leo Tecosky and the Brooklyn Glass team.

At WantedDesign’s Brooklyn outpost, Oui Design brings support to Industry City in commissioning Camille Walala to brighten up the surroundings with one of her signature graphic murals. Drawing on a mixed bag of influences, including African tribal art, De Stijl, Pop Art, and Memphis design—all of which are partial to bold colors—Walala will transform a prominent but neglected building with a permanent seven-story mural—her largest commission to date. “The Camille Walala mural and the Couleur exhibit are somehow connected,” says WantedDesign cofounders Odile Hainaut and Claire Pijoulat. “Interestingly enough, we did not work on these two projects simultaneously, though it now seems like we’ve created a pattern: showcasing French creative women, and highlighting their relation to color.” The piece is produced with French paint, using a custom color palette from Ressource. Inspired by the architecture itself, the mural plays with the repetition of windows. “The site is bathed in the most beautiful colors at sunset, which has inspired my palette for the project,” Walala says. —Alexandra Alexa

At Domaine de Boisbuchet, a research and design center in the southwest of France, 10 current EnsAD students participated in a workshop focused on the potential of bamboo in design, the results of which will be on view as part of the Conscious Design showcase at WantedDesign Brooklyn. The students explored the expressive and structural potential of bamboo as a material, the types of objects it’s suited for, and the possibility of industrial applications that might have economic and ecological benefits. Alexis Fiony and Marie Piplard’s “O-de,” a rainwater collection device designed for urban balconies, is a standout. Bamboo slats arranged in the form of a tree channel raindrops into a glass vessel. It presents a simple ritual for gathering rain and reusing it in the house, and in the process, it reconnects users to the idea that protecting the environment is a shared responsibility that starts with rethinking our daily habits. —A.A.

Where the slightest nuance can redefine our mood, color is the language with which we perceive our world. From May 17 through 21, WantedDesign Brooklyn presents “Couleur,” an exhibition curated by Odile Hainaut and Claire Pijoulat. “Our role as curators in the Oui Design program was to continue to bring creative French talents in New York and to initiate more transatlantic creative exchanges,” says Hainaut and Pijoulat. In doing so, the exhibit, designed by Eve Marine Basuyaux, celebrates the many pigments that shape our everyday lives with the vibrant and colorful works of three emerging French designers: Julie Richoz, Ionna Vautrin, and Pernelle Poyet. 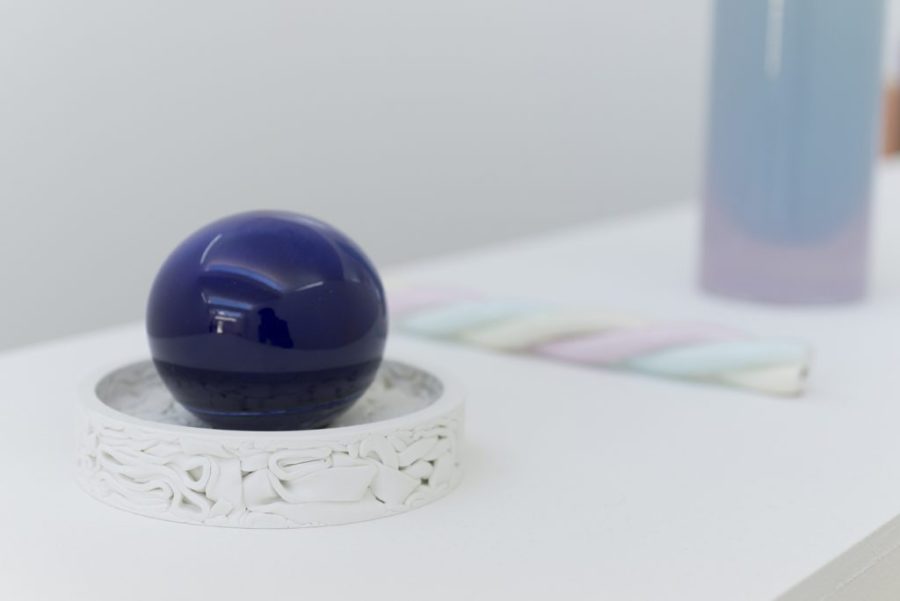 Icons of French Design at ICFF

In partnership with Institut Français-Paris, VIA is organizing a traveling exhibition, titled “NO TASTE FOR BAD TASTE so Starck, so Bouroullec…so le French Design.” The presentation aims to reveal the DNA of French design by bringing together the most iconic pieces of its history. Forty experts working in various design related fields were brought together to select 10 core values of 21st-century French design and identify their favorite examples of each. The show includes works by Philippe Starck, Ronan and Erwan Bouroullec, Ligne Roset, Fermob, and Hermès. Its original sceneography is designed by famous French designe Jean-Charles de Castelbajac. —A.A.

Design of the Day

This Vessel Will Renew Your Hope in American Design