A glove thrown at Elon Musk, the new four-door from the German design sticklers is still demonstrably a Porsche, but a step forward in every sense.

The sheet and the camo decals are at last off the Porsche Taycan, the German manufacturer’s long-teased first leap into the growing electric vehicle market and a sincere challenge to Tesla’s popular, lightening–fast line of sedans. While priced far higher than most options in Elon Musk’s fleet—Taycan’s entry-level MSRP rests above $150,000 before tax incentives, more than twice that of a no-frills Model S—the performance, technology design, visual appeal, and heritage on offer balance out the proposition. It’s not hard to imagine that Porsche, which benefits from being under the umbrella of a far, far larger corporation, has now made looking at Tesla as a luxury car somewhat of a larger leap (at least until Elon Musk begins delivering his long-promised roadster in earnest).

From an engineering perspective, the Taycan certainly seems the product of the slide rule-loving wonks at Porsche: the developments and innovations here are so multifarious that it takes an expert to peel that particular onion. A 24-minute charge up, 236-280 mile range, 2.6-second 0-60mph, 616hp, and a 161mph top speed are some of the more attractive (and digestible) headline numbers from the base model Turbo (the $185,000 S model ups many of those digits). The Taycan’s 7:42 mark at Germany’s famed Nürburgring course (a record for a four-door EV) is nothing to scoff at either.

But none of this is surprising. Upon the first looks at Porsche’s Mission E concept back at the 2015 Frankfurt Auto Show, the promise of a market-ready EV coming out of Porsche’s labs included expectations of high-tech high performance. Considering the brand, it’s natural.

What is, at least from our perspective, somewhat of a surprise, is the beauty on offer here. Spy shots of the Taycan under camo suggested a form very similar to Tesla’s Model S that, while keeping with Porsche’s intensely guarded, almost never shifting aesthetic, seemed somewhat of a letdown—an automotive wet noodle from what should be a maker of inspiring cars. 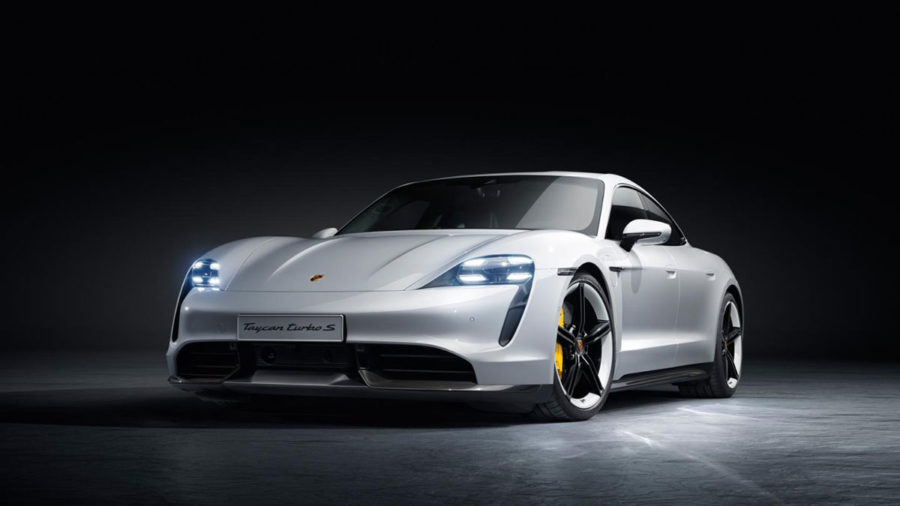 What was revealed today, however, is far more like the Mission E and far more delightful and engaging. The rear curves and side profile that, to purists, is required of a Porsche are there for the most part (though some fanatics will have issues with the extended tail). The bonnet with its fluting is wonderfully aggressive (a rarity for the brand) and the wind tunnel-friendly shaping, altitude, and lines demanded by EVs have suited the Taycan well. Yes, the face of the car will again have Porsche purists in knots, but it too is a welcome surprise, along with those daring headlights. The interior is, well, a Porsche interior, full of the kind of advanced bells and whistles one expects from a luxury vehicle (EV or otherwise), but with the manufacturer’s familiar, hard Teutonic restraint. Overall, it’s a beautiful number that seems a visual step up from the brand’s Panamera sedan and one that makes the now-aging Tesla fleet look suddenly tinny and far less appealing.

In a week where we’ve seen a preview the first publicly available hybrid supercar from gas-guzzling Italian muscle purveyor Lamborghini and more news of McClaren’s various efforts toward an entry into the EV market, and a bit more than a month after Lotus unveiled its own battery-powered hypercar, it seems we finally have our first gorgeous, mass-produced, high-performance, all-electric luxury sedan—a landmark moment for the increasingly competitive field.

Modsy Shuts Down Without a Trace, and Other News

Maldives Plans to Build a Floating Island City, and...

John Pawson Can Even Make Bedding Sculptural, and...

A Design Miami/ Installation That Lights Up With...