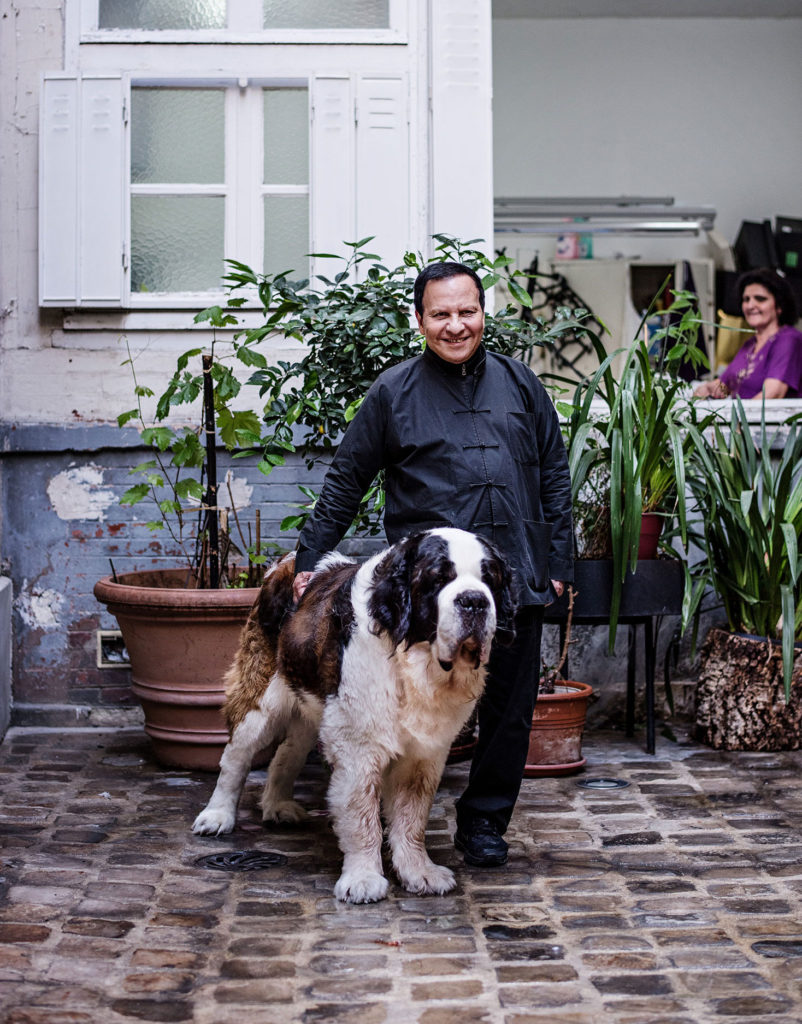 Our editor-in-chief pays tribute to the rich life of the legendary fashion designer.

By Spencer Bailey
Photos by Franck Juery November 18, 2017
Share
Back

Our editor-in-chief pays tribute to the rich life of the legendary fashion designer.

Driving upstate to Dutchess County, New York, earlier this morning, I learned that Azzedine Alaïa had passed away at age 82.

My mind immediately went back to my earliest interaction with him—or, at least, with his world—in November 2013. I had recently become the top editor at Surface, and was in Paris to interview the artist Julian Schnabel, a close friend of Alaïa’s, for our Art Issue cover story that year. Schnabel, who was staying at a small apartment-style hotel owned by Alaïa next to the couturier’s ground-level shop and upstairs studio, on the Rue de Moussy in the Marais district, led me into an outdoor courtyard in the back. Adjacent to where we stood was the property’s kitchen, where Alaïa was known to host infamous lunch and dinner parties. From there, Schnabel and I walked past a laundry room, down a vestibule, and into a unkempt private garden. This is where I conducted the interview—he wanted to be outside, and to enjoy the natural light. It was a surprisingly remarkable place, a 12-by-12-foot box full of plants and weeds and random rusty bric-a-brac, a ramshackle stone wall on the street side. It felt as if I was sitting inside of a Schnabel painting with the artist himself. In the context of Alaïa—whose sculptural fashion celebrated the female form, and was done at an elevated level of craft far beyond most any other fashion designer or house—the messiness of the garden was unexpected, but not entirely so. Whereas so much of luxury is buttoned-up, pristine, or pretentious, Alaïa took his own path largely apart from the fashion system. I didn’t get to meet Alaïa that day, but in a way, interviewing Schnabel in that garden, I did.

Three years later, during Paris Fashion Week, I was back at Alaïa’s. This time, it was because Surface was celebrating our Fall Fashion issue with him, and we were co-hosting a dinner party in his kitchen. Though Alaïa was known to skirt the press and rarely allowed photographers in his space or at his runway shows, he had graciously welcomed Surface and writer Alexandra Marshall into his orbit for a cover story. Focusing on Galerie Azzedine Alaïa, the piece showcases how art was a central—and essential—part of Alaïa’s life, and that the gallery was a manifestation of that. Led by the curator Donatien Grau, the space started out with fashion and photography exhibitions, but slowly began to showcase works by the broader artistic community surrounding the house, including paintings by Alaïa’s partner, the artist Christoph von Weyhe. At the Surface dinner, I truly understood the specialness of Alaïa: With him at the main table in the middle of the room, there were Kim and Kourtney Kardashian, The New York Times fashion critic Vanessa Friedman, the architect Peter Marino, 10 Corso Como’s Carla Sozzani, Deena Aljuhani Abdulaziz, Carlyne Cerf de Dudzeele, Maye Musk, and the designer Ronan Bouroullec. And—somehow—it all made sense. This was Alaïa’s gift, to understand how fashion, when done in an uncompromising way, with deep heart—not unlike art—crosses so many borders, boundaries, and disciplines. It was in this garden that he became one of the greatest fashion treasure’s of the 20th and 21st centuries.

Here, to remember the designer, interviews with a few of his closest friends, originally printed with our 2016 cover story, but never before published online:

“Mr. Alaïa is a legend—one of the best designers and creators of our time. He is so kind and generous … and funny! A very warm soul—I’ve enjoyed every moment I have had with him. As a child, my family’s white poodle was named Azzedine Alaïa. That’s how much my mom [Kris Jenner] loved him. She introduced me to his clothes. I remember watching her get dressed. If it was a fun date night out she would put on an Alaïa. She saved them all and when I started to go to red carpet events she would let me wear them. Now every time I go to Paris I make sure I go into his store. I always search for vintage pieces. As for his gallery, I have not been, but can’t wait to go.”

“As a designer, he does things with fabric and form no one else even thinks about. As a man, he is a very generous person who cares deeply about what he does and the people who work for him, and the women he dresses. But with Alaïa, there is no separating the person from the fashion designer. He really loves what he does. What is striking to me about his clothing is that I have the first Alaïa skirt I ever bought, probably about 14 years ago, and everything since then, and I wear every piece over and over and over again. They don’t date. I was wearing one of his dresses on Monday, and I was coming out of the subway on 40th Street and 8th Avenue to go to work. This guy, this policeman, was walking into the subway and he said, ‘That is a beautiful dress.’ In New York, that’s pretty rare. But when I am wearing Alaïa I get regularly stopped by strangers—both women and men—on the street to say they like my dress.”

“Lunches and dinners at Azzedine’s are appropriately legendary.  Despite not speaking French nor Azzedine English, we somehow seem to understand each other perfectly about the things that matter, talking or gesturing into the night. There is a privilege and intimacy seeing him work—to see his thinking, his actions, his practice.  His commitment to creating new, uncompromised work seems to fuel his fascination with the most oblique and progressive technology.  He does not just respond to technological opportunity.  He has the vision and tenacity to actually create and push technology to meet his demands, his belief in what could be possible. I so admire the purity of his work, his resolve to resist the pressure of cost or externally imposed schedules or protocols.  Instead he is preoccupied by pursuing the very best creative design solution, ever evolving and perfecting rather than destroying and rebuilding every season. Azzedine defines that very rarest combination of extraordinary genius with remarkable generosity and kindness. And he makes me laugh. The twinkle in his eyes as he creeps up behind someone working quietly in his atelier and whacks the work table with his wooden rule to make them jump!”

“Azzedine has always been such a strong, loving, fatherly figure to me. From the first day I met him, he has been so supportive of my career. At the first show I did for him in Paris, he was so great to me and wanted to help me get more work. He called all his friends, Kenzo and Commes de Garçons, and asked them to book me. They said, ‘But she can’t walk!’  And he said, ‘But she has such a great ass!’”

“As a person, I consider Azzedine family, and I know it is mutual. Professionally, I feel so fortunate and blessed to have spent over 10 years beside such a master. Working with Mr. Alaîa is taking a vow. It requires full dedication, lots of hard work, patience, and integrity. He changed my eyes forever, beyond learning. It was a transformation. Mr. Alaïa is a master craftsman, always refining and improving his art. He is in a category of his own, far beyond what we consider a fashion designer these days. As for the Galerie Azzedine Alaïa, I am always invited to openings. I wish I was still living in Paris; I would have loved to see the exhibition of the amazing painter Christoph von Weyhe.”

Can House of Gucci Propel the Heritage Fashion House?

Who Says You Can't Mix Work With Pleasure?