RM Sotheby’s is taking up the sale of a new kind of classic car, driven by enthusiasm from folks whose sites of nostalgia tend more toward The Breakfast Club than Breakfast at Tiffany’s.

RM Sotheby’s is taking up the sale of a new kind of classic car, driven by enthusiasm from folks whose sites of nostalgia tend more toward The Breakfast Club than Breakfast at Tiffany’s.

(Will the esteemed house be keeping the polyblend suit industry in business? Installing gyrating balloon men to leer at passersby? Surely, it can’t be hanging streamers from a chain-link fence to attract potential clientele.)

None of the above. Rather, with its “Youngtimer” Dream Garage series, started in Paris back in February and ending in April in Essen, Germany, RM Sotheby’s sold a collection of European and Japanese luxury cars from the 1980s, 1990s, and early 2000s. These included Generation X sports car icons like the Porsche 928 and Nissan 300ZX, bruisers like the Bentley Turbo R and Mercedes-AMG S-Class coupes, a near-complete collection of Alpina BMWs, plus scores of other Greed Era oddities like the Aston Martin Lagonda, Renault 5 Turbo and Lotus Esprit Turbo. (Turbochargers, like sleeves, were big in the eighties.)

This is a motley crew of new age classics—collector items just in their adolescence—listed by an auction house better known for selling a $50 million 1962 Ferrari GTO in August of last year. What’s going on? Things in the steel-girded, spit-shined realm of classic cars aren’t quite topsy-turvy, but they are undergoing a shift.

Because, while “Blue Chip” cars such as the aforementioned Ferrari, plus Mercedes Gullwings, Aston Martin DB5s, and Shelby Cobras still command the highest prices, the energy of the moment is in cars with a whiff of accessibility—the so-called “Young Classics” of the 1980s and 1990s.

But the possibility of a lucrative sale isn’t the only reason RM Sotheby’s is attracted to this new market. There’s also, for example, Radwood, a network of car shows billed as “a celebration of ’80s and ’90s automotive lifestyle,” whose entry guidelines dictate build dates between 1980 and 1999. Last year, it attracted thousands of ecstatic Gen X and millennial fans, many dressed in period style. (Read: Members Only jackets, Air Force 1s and enough Spandex to swaddle a cardio-minded herd of elephants.) Does your uncle have an old Volvo 240 wagon and a Brooks Brothers “Fun Shirt” you can borrow?

Another factor in the young classics movement is the wryly named vintage car website BringATrailer.com. (The name refers to some of the early featured cars—i.e., they didn’t run.) What started in 2007 as a loosely formatted blog built to surface interesting classifieds from Craigslist and eBay now runs its own auctions. BaT, as it’s called amongst regulars, asks just a $99 listing fee plus 5% of the final bid price, and business is booming. Two of the most astonishing sales have come from precisely the type of “Youngtimer” cars in which Sotheby’s is signaling interest. In January, an ultra-low-mileage 1994 Toyota Supra Targa sold for an astounding $121,000. A month later, a 2002 Z3 M Coupe sold for $92,000—this, a late-model BMW whose “Clownshoe” nickname refers to a profile that, for most of the car’s life, made it an object of derision.

In truth, Sotheby’s is not competing for market share with middling dealerships named LUXXURY $ALES or QUALITEE INVESTMENTS, LLC. While you might find a 1997 Rolls-Royce Silver Spur, a 1988 Mercedes-Benz 560SEC Cabriolet and a 1991 Jaguar XJS V-12 at both the Sotheby’s auction and the airport-adjacent lots, the “Youngtimer” cars are the best examples of their type in the world: perfect condition, ultra-low mileage and, in some cases, one of only a handful ever made.

Many sold without reserve, and records were broken. Missed out on a 1980s classic as it ascends to Blue Chip status? Maybe wait for something else to fall—like, say, a 1962 Ferrari GTO. 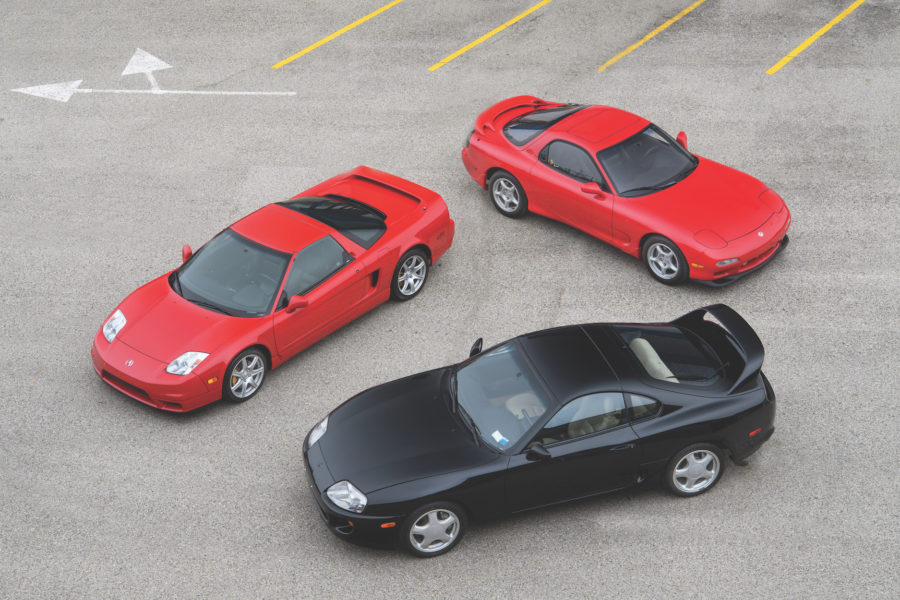 The Rich Are Aviation Super Emitters

Orlando Slated to become a Hub for America’s First...

Noah Davis, Influential Artist Who Died as His Star...

At the End of the World, Infrastructure Will Save Us,...

The Candidates for The Best Cruise Ship of 2019 Share...

NetJets Welcomes a New Addition to Its Fleet

A First Look at The Porsche Taycan All-Electric...

Five Visions of the Airport of The Future Offer a New...