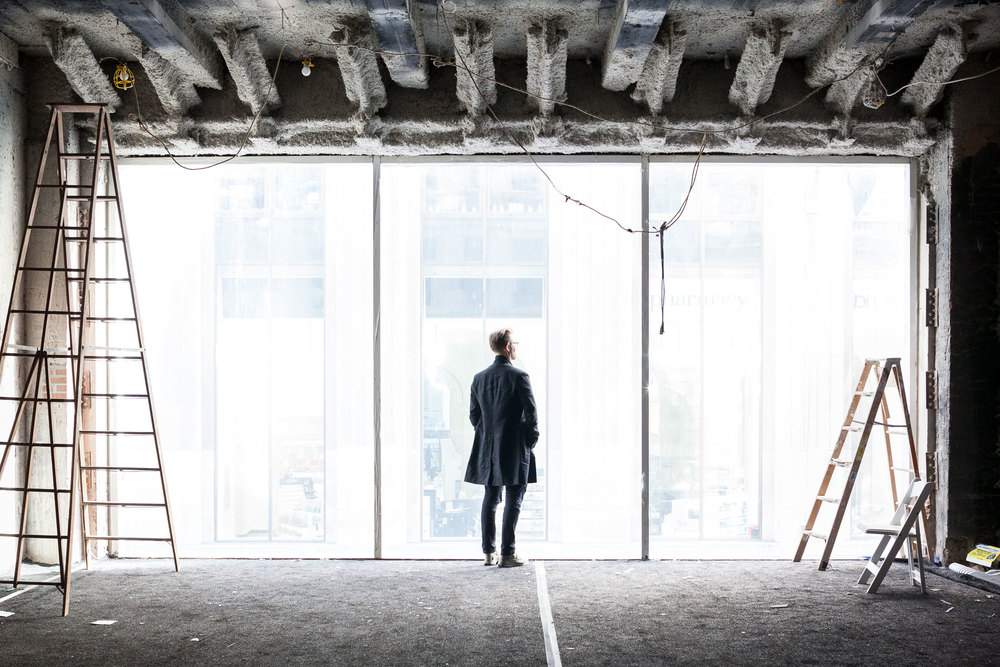 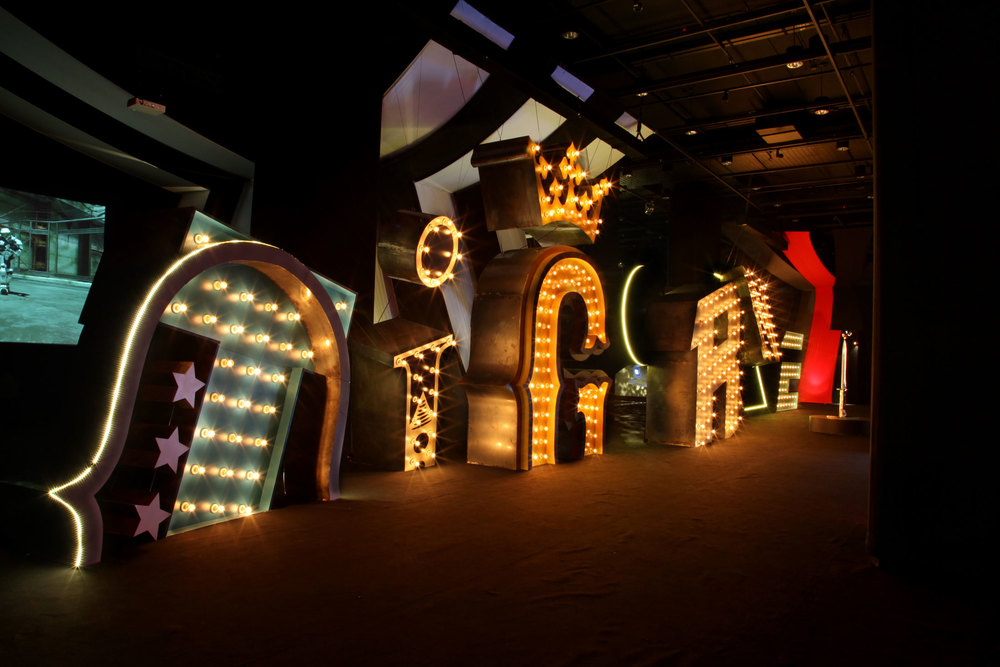 Simon Birch Goes All In With "The 14th Factory"

It’s one of those bleak, irritatingly cold January nights in New York when I meet Simon Birch in front of 23 Wall Street. The bankers and brokers who colonize the financial district during business hours have already decamped for the riches of Uptown, leaving behind a barren cobble-stoned streetscape save for a few stragglers scurrying to the subway. Across from the stock exchange, Birch, 41, is standing on the steps of the imposing limestone structure that once housed the first J.P. Morgan & Company headquarters in 1913 and has been abandoned for more than a decade.

The sinewy British artist, who has called Hong Kong home for nearly two decades, is togged out in a black trench coat and low-slung glasses with a sleek, slicked-back hairdo—Neo from The Matrix comes to mind. If I’m looking for a ray of sunshine on this wintery night, I’ve come to the wrong place. Birch is here to tell me about “The 14th Factory,” his new show about the collapse of civilization, which will take over seven floors inside the old bank building.

Birch has earned a reputation for big, aspirational exhibitions. The U.K.-born artist set off to Hong Kong not long after his 22nd birthday to join the trailblazers who were germinating the nascent creative scene. The success of his dramatic figurative works spurred a desire to put on block- buster multimedia installations like “The Brutal House” (2008), “Hope and Glory: A Conceptual Circus” (2010), and “Daydreaming With…” (2012), a collaboration with James Lavelle, a DJ in the electronic group Unkle, which blurred the lines between music and design. “The 14th Factory” marks two milestones for Birch: His U.S. debut will also be his most elaborate project to date. After three years of production, the show will open on April 14 for a six-week run, before moving on to L.A. It’s a seminal moment in Birch’s career, not only for the scope but the profound message he’s eager to deliver.

“Whenever empires expand, they eventually contract,” he says. “Humans seem to live better lives in smaller communities, but at this point in civilization we’ve never expanded to such a degree that we’re facing global collapse and never with such a relentless, Western, capitalist, democratic ideology that’s clearly not working.”

You’d have to be an inhabitant of outer space to not know what he’s talking about. From Washington, D.C., to Paris and Beijing, there’s a pervading sense of doom coagulating among the public. The worldwide economic meltdown, rising inequality, environmental havoc, and fundamental rupture of the relationship between citizens and institutions, from governments to corporations, have fueled a widespread anger that is crossing previously intransigent political lines. Simply put, people are pissed off. To Birch, this is just another moment in history that has cycled through many times before. “It’s a reflection of the state of the world right now in many ways,” he says. “And a reaction to it because everything is changing whether we like it or not. But that’s what needs to happen because it’s unsustainable.” Birch believes it’s our concept of growth that is destroying us. “Progress is not more stuff, especially stuff that has negative repercussions for people and the environment, or that only benefits the few.”

Though foreboding as it may sound, Birch sees much of this as a positive. Or at the very least beneficial.

Birch drifted around England growing up. He was born in the southeastern city of Brighton, spent some of his adolescence in the Midlands, ultimately landing in Leicester. There, at age 16, he was swept up in ’90s rave counterculture. While working in the club scene as a DJ and promoting large-scale parties, Birch found himself in dire straits, steeped in debt and plagued by the town’s notorious violence—his brother endured a nearly fatal stabbing and a close friend was murdered by a gang.

The string of sobering incidents led to a course correction: Birch decided to move to Hong Kong, not yet knowing his career path. Wide-eyed kids in unfamiliar and heaving mega-cities find out really fast what they’re made of—the scrappy, self-reliant Birch navigated his new surroundings with savvy and started to find his footing. “A Hong Kong second is a New York minute, and that pace, as well as the scale of the city, has had an effect on me,” he says. “There’s a lack of an art platform there. If you want to make big installations you have to find collaborators, space, funding, audience, and hustle a lot of favors.” Because the city doesn’t have a formal hierarchy or structure that exists in places with more history and establishment, “You have to just do it on your own.”

As he was gaining traction in the art world, winning both the Louis Vuitton Asia Art Award and the Sovereign Art Foundation Award in 2007, adversity came calling again. He was diagnosed at age 33 with NK/T-cell non-Hodgkins lymphoma, a rare and vicious form of cancer with a low survival rate. He was given six months to live. Having overcome misfortune in Leicester and being on the cusp of establishing himself, Birch leaned on his stouthearted resiliency. He adopted an aggressive regimen of treatments: a mix of Eastern and Western medicine, alternative therapies and diet, in addition to excruciating chemotherapy and radiation treatments that rendered him unable to eat or talk.

He could, however, dream. Ideas flowed; pen and paper became his voice. His health began to improve and with it came a new perspective. Birch beat cancer in 2008, and what has followed since is an artistic honesty gleaned from his clash with death. “It affected my approach to everything,” he says. “I realized I have little to lose, that life is short, that one should commit and risk with at least some clarity. It made me very ambitious, like time is running out for me.”

His subsequent show, “Hope and Glory: A Conceptual Circus,” in 2010, was a journey through a metaphorical labyrinth of video- and light-centric works, one of the largest multimedia exhibitions ever put on in Hong Kong. “I built 20 installations all at the same time so it was a little unruly, scruffy, and not too sophisticated,” he says. “But I think New York and ‘The 14th Factory’ is on a whole other level—and we’re just getting started.”

Birch knows as well as anyone that eradicating a disease is an agonizing process that tests the limits of the human spirit. But just as his struggle with cancer spawned a purer form of creativity, he believes a wholesale purge of a broken system will present the clean slate necessary for change. “‘Collapse’ is an interesting word,” he says. “It doesn’t have to be an end, it can be the beginning of something new, something better, something that works for everyone.”

Birch is staking it all on “The 14th Factory.” He’s allocated every last dollar from his personal coffers, sold everything he owns, and even borrowed money to bring the 14-part installation to fruition. When it’s over, he’ll auction off the works, donating some of the profits to charity and using the rest to fund his new foundation of the same name, with the goal of making art accessible to kids. “Simon is talented, driven, and has the vision needed to make ‘The 14th Factory’ a success,” says Tommy Hilfiger, a member of the foundation’s advisory committee. “I’m proud to be supporting him on this journey.”

The show itself is a multi-sensory jamboree akin to Alice’s trip down the rabbit hole. Visitors will meander through five floors of spaces with various themes and concepts: A replica of a set from Stanley Kubrick’s 1968 film 2001: A Space Odyssey, recreated by the set builder’s nephew; discarded airplane wings and rudders, sourced from a jetliner graveyard in the Mojave Desert, sinking into a faux lake; a post-apocalypse Garden of Eden; video installations of suspended humans falling endlessly into an abyss and a collision that totals a Ferrari.

“The aim with this piece was to create the sense of an endless fall,” says independent filmmaker Scott Carthy, who is a collaborator on the project. “When we talk about where we are now as a species and how unnecessarily complicated our lives are on a daily basis, it’s interesting to see ourselves isolated like this, just falling.”

The show’s name derives from an area in Canton—modern-day Guangzhou— known as Thirteen Factories, which was a seaside complex in the 18th century that has an extremely sketchy history. The show alludes to an imagined 14th factory, one that exists outside of the realm of sovereign nations and—if the mind-bending set pieces are any indication—sovereign minds as well. According to Birch, the show asks what happens next using a wonderland environment with explosive sculptures, science fiction installations, cinematic video works with cars crashing and people brawling, and massive found objects. “As much as it’s a reaction and a mirror, it’s also a creation—our own little utopia where everything is upside down, people fly through the air, airplanes are on the ground, gardens are inside, and enlightenment is available to those who reach the end of the journey over many floors of this historic building on Wall Street,” Birch says.

“Its very location reinforces these ideas, a place of invasion, then liberty, then greed and corruption: an intense place of human activity, rise and fall.” Birch’s hope for the audience is that they feel something, if only in the smallest way. “For all the bravado, in some ways it’s a very humble show,” he says. “Just me and a bunch of mates coming together to try to make a difference.” Despite its scale and ambition, existential messaging and dire social appraisal, the objective of “The 14th Factory” is, at its core, pretty simple, Birch says. “Ultimately I hope people walk away saying, ‘Now that’s art!’”

Update: Per an Instagram post from The 14th Factory, the project has been delayed due to logistics problems. It will be installed at a later date, yet to be confirmed.