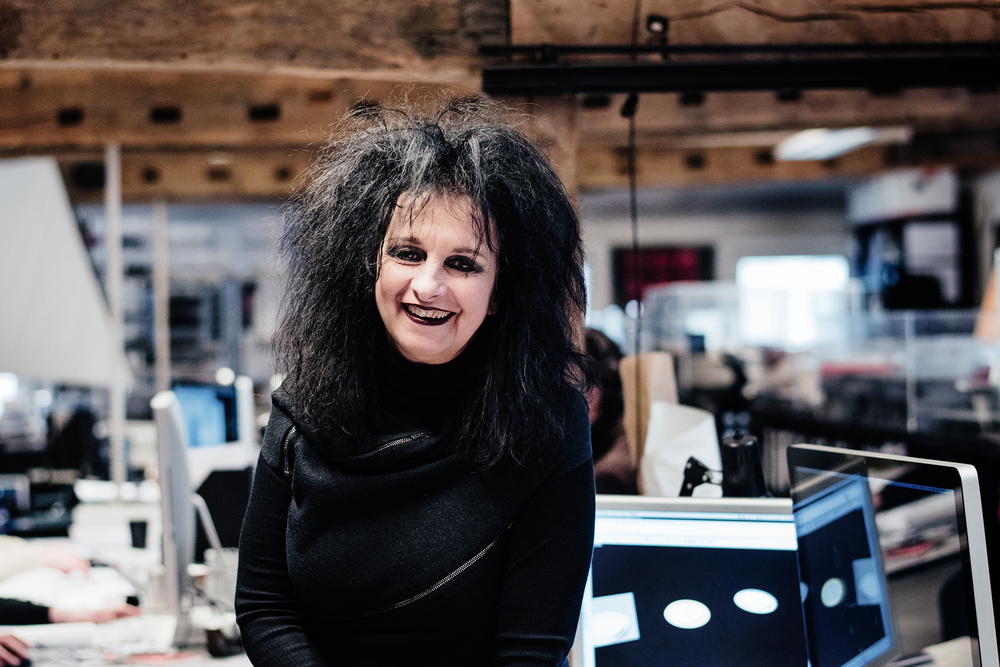 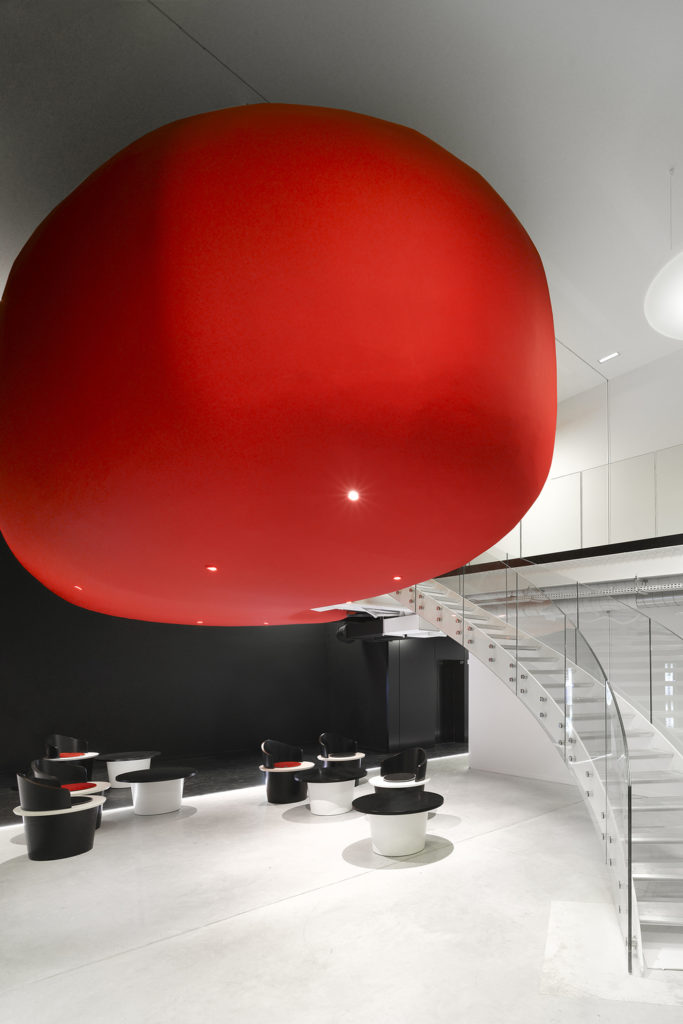 The interior of Le Cargo in Paris. (Photo: Roland Halbe) … 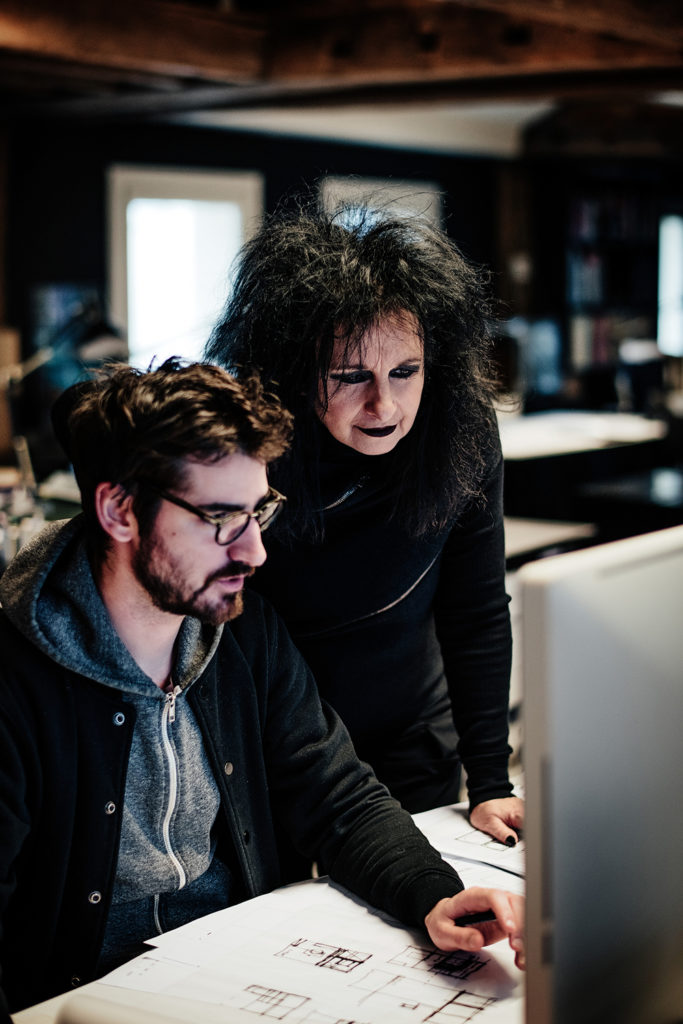 Decq working with a colleague at her studio. … 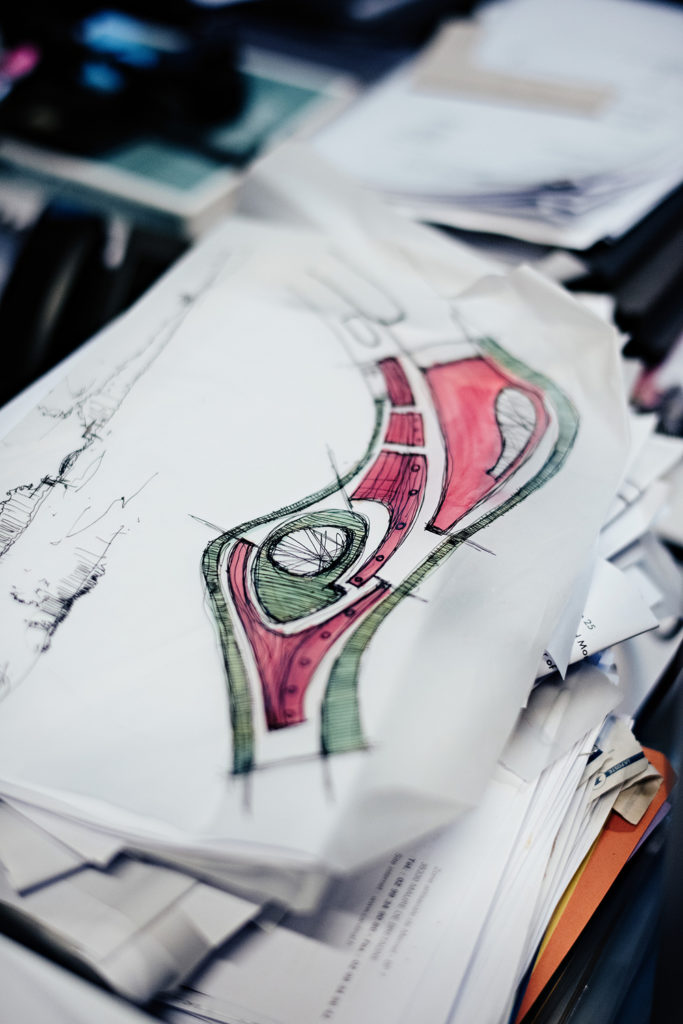 A sketch at Decq's studio. …
Architecture

Odile Decq Breaks the Rules in Life and Work

The edgy French architect has become an advocate for women in the field and the next generation of practitioners.

The edgy French architect has become an advocate for women in the field and the next generation of practitioners.

Odile Decq’s appearance may stand out, but its her work that really grabs attention. Not only is the 60-year-old a leading booster for women’s rights in architecture, she also recently founded France’s forward-thinking, highly experimental Confluence Institute for Innovation and Creative Strategies in Architecture in Lyon. She’s the creator of a wide range of disruptive, unforgettable structures, too, including the organic interiors of the Palais Garnier’s restaurant in Paris and the Museum of Contemporary Art of Rome (MACRO). Decq’s architecture challenges the world we live in. It is intentionally resistant, not conforming to the norm. Among her recently completed projects are the Fangshan Tangshan National Geopark Museum, in China, and a five-year renovation of Hungarian architect Antti Lovag’s iconic 1970s “bubble house,” in the South of France.

The 2016 recipient of the Jane Drew Prize, a London-based honor awarded for raising the profile of women in architecture, Decq is among just a dozen or so female practitioners who have made names for themselves in the male-dominated world of architecture. This has long been the case, and it doesn’t seem to be changing, at least not fast enough. Decq remembers when, in 1999, a French trade magazine invited her to speak about the status of women in architecture. “Back then,” she says, “Zaha Hadid was being pushed away from the Cardiff Bay Opera House project she had just won. I was confident then that the 21st century would bring women to the forefront of architecture; I asked my students to remain patient. Sixteen years later, I’m losing patience!” (Hadid passed away on March 31 at age 65; she was the winner of the 2012 Jane Drew Prize.)

Beyond her influence as a women in an industry that desperately needs it—in the U.S., for example, the number of women architects has only increased from 24 percent to 25.7 percent since 2004, according the Bureau of Labor Statistics—Decq’s architecture is incredibly impactful on its own. One example is Le Cargo, a newly opened office building she designed in Paris. “Le Cargo aims to become a leader in innovation technology,” says Jean-Louis Missika, the urbanism and architecture counselor at the City Hall of Paris. “Odile’s vision was to turn the former warehouse into a luminous beacon for start-ups; we hope Le Cargo’s content will be as visionary as its architecture.”

Opened in March, after eight years of planning and construction, Le Cargo spreads itself across 173,000 square feet. “I tried to redefine what an incubator is: I pushed for more public spaces mixing with community spaces,” Decq says. “I embraced an Anglo-Saxon approach to force people to live transversally. I designed it as a place for accidental creativity.”

A spirited rule-breaker, Decq is typically perceived as a willful punk—much like the teenager she used to be—and an irreverent mind. From a young age, she stood up to authority, often bending the rules of her Catholic upbringing: She sewed her own jeans even though she wasn’t allowed to buy any, and she took part in the May 1968 demonstrations in France. It wasn’t long before she was thrown out of school and began to clash with her father. “‘You can’t study architecture, it is impossible,’” Decq recalls him saying. In response, she rebelled and soon enrolled in what is now called the Ecole Nationale Supérieure d’Architecture de Paris La Villette. She was very driven from the start. In 1978, Decq established her own practice. She ran the studio with her partner and husband, Benoît Cornette, until his death in a car accident in 1998.

Decq’s persona is much like her buildings: evocative and seemingly spiky on the outside, but gentle, balanced, and open-minded on the inside. For Decq, architecture evolves from the inside out. First she experiments with the idea of a building and then establishes the form from there. She likes to manipulate and challenge the space inside, sometimes playing with the color red—one of her trademarks. Rome’s striking MACRO, completed in 2010, wears lacquered red, functioning almost like the heart of the historic building. Taking center stage, the dynamic, unexpected form inserts itself rebelliously and with authority but in a somehow subtle way. “My red is particular—it is fundamentally bright. It represents life, the energy within,” says Decq, who used to conduct TV interviews wearing deep-red eye shadow to contrast with her ink-black haircut. (Her edgy appearance, though entirely her own, recalls that of Robert Smith from The Cure.)

The late French architect Claude Parent, a close mentor, used to say that Decq “has unusual looks, like no other.” Which may be an understatement. For those who aren’t frightened by her appearance, Decq wears a strong carapace on the outside. It’s a presentation that could also be compared to her buildings, which unfold one layer at a time. “This is the way I am: I want visitors to explore and discover my buildings step by step. I don’t like presenting everything at once,” she says. “My architecture hides secrets. I love surprises.”

Underlining her approach is a true sense of the baroque. In Decq’s mind, neo-classical designs offer the viewer a static overview; with baroque buildings, however, one has to travel through the many layers to discover their full potential. By abolishing symmetry, the baroque offers multiple perspectives and embraces a surrealist sensibility. From the outside, Decq’s projects like FRAC Bretagne (Brittany’s Regional Fund for Contemporary Art, inaugurated in 2012) or GL Events headquarters in Lyon (2014) unfold as sculptural monoliths. Inside, they resemble a series of complex spaces and perspectives, each informed by the other.

Yet another example of Decq’s wild imagination is a “glass house” she completed last fall for a man losing his eyesight. “This Englishman wanted a house by the sea infused with light,” she says. “As there were no architectural restrictions, we decided to experiment with glass. The house is an inclined box, a geometric space tilted on the side: It has no roof, nor wall. It explores sloped horizontality and verticality. Completely translucent, one has to adapt one’s every move to live in it.” She describes the result as “utter freedom” for her client.

Decq has several more projects in the pipeline, too. One of them is an office building in Paris called Twist, set to be completed in 2018, for the developer Icade. “I cut the building in three blocks and inserted huge glass houses with trees to create sudden interaction in between the elevators.” Another, which she recently won in a competition, is the Diagonal residential tower in Barcelona that upgrades a concrete structure built 10 years ago. “It will give the [apartments], in the end, a real specificity,” she says.

Being specific about architecture could very well be Decq’s modus operandi. “Odile has always supported innovation and architectural research,” says architect Dominique Jakob, cofounder of the Paris-based firm Jakob + MacFarlane. “I was moved when she came to congratulate us in 1998, the day we won the competition to design the restaurant Pompidou, on top of Centre Pompidou. In everything she does and ever did, Decq has always been generous and open-minded. It’s such a rare quality in our profession. Odile shows a renewed involvement in today’s architecture; she never ceases to push its boundaries, to break new grounds, to foster innovation and creativity.”

Teaching and architectural education has long been a core interest of Decq’s, and it’s where she thrives most outside of her design practice. She taught at Ecole Spéciale d’Architecture (ESA) in Paris from 1992 to 2007, before becoming head of the school from 2007 to 2012, and she has been a visiting lecturer at Columbia University in New York, Bartlett in London, and Kunstakademie in Vienna and Düsseldorf. All of which helped lead her to establish her own international school in Lyon, which opened in 2014. Called the Confluence Institute for Innovation and Creative Strategies in Architecture, it’s housed in a former market building that was converted by Decq herself. “I chose everything down to its name, which highlights a new approach to architectural studies,” she says. “The world has changed: Today an architect needs to be able to manage, create, and apply his learning to many fields, and not only to the architecture world. If you think about it, architects need to assess multiple constraints and synthesize a complex program to propose one solution.

“Architecture today is about creative strategies,” she continues. “I think ‘architecture thinking’ will replace ‘design thinking’ as the world grows more and more complex. I wanted to create a school to support and explore this frame of thinking. Architects are tomorrow’s problem solvers.”

Inside the school, Decq pushes students to discover their own way. She sees no one-size-fits-all model for architectural thinking; her aim is for it to be personal, to let strong voices shine. “Fostering autonomy enables different perspectives,” she says. “I’m not a master. I want the school to be a nurturing ground for disruptive thinking. What do I know about architecture tomorrow? My students will never be architects like I once was. The world is a different place.”

How much architecture has changed in recent decades—or at least what can happen to a building as technologies and client needs evolve—is encapsulated in Decq’s award-winning Banque Populaire de l’Ouest (BPO) in Rennes, France. The building is now threatened with demolition, just two and a half decades after its completion. “I went back there last December to meet with the new owners,” Decq says. “I was surprised by how much I still loved it. It looks powerful yet remains simple.”

A long, empty void, the flexible space was built so that the client—a bank—would organize it over time in various ways. A slap in the face, the news of its possible demolition shook the architectural world, which has launched a fight to save it. “I am restless and always ready to stand up for a good cause,” Decq says. The website savethebpobuilding.com has already gathered thousands of signatures, including those of Pritzker Prize winners—all of whom are men—such as Norman Foster, Frank Gehry, Thom Mayne, Toyo Ito, and Jean Nouvel. Decq has long been embraced by the leading minds of her time. And now, not only has she joined their ranks, she’s helping pave the way for many more to join as well. If she has her way, a majority of them will be women.

Simon Birch Goes All In With &lquouThe 14th Factory &lquou