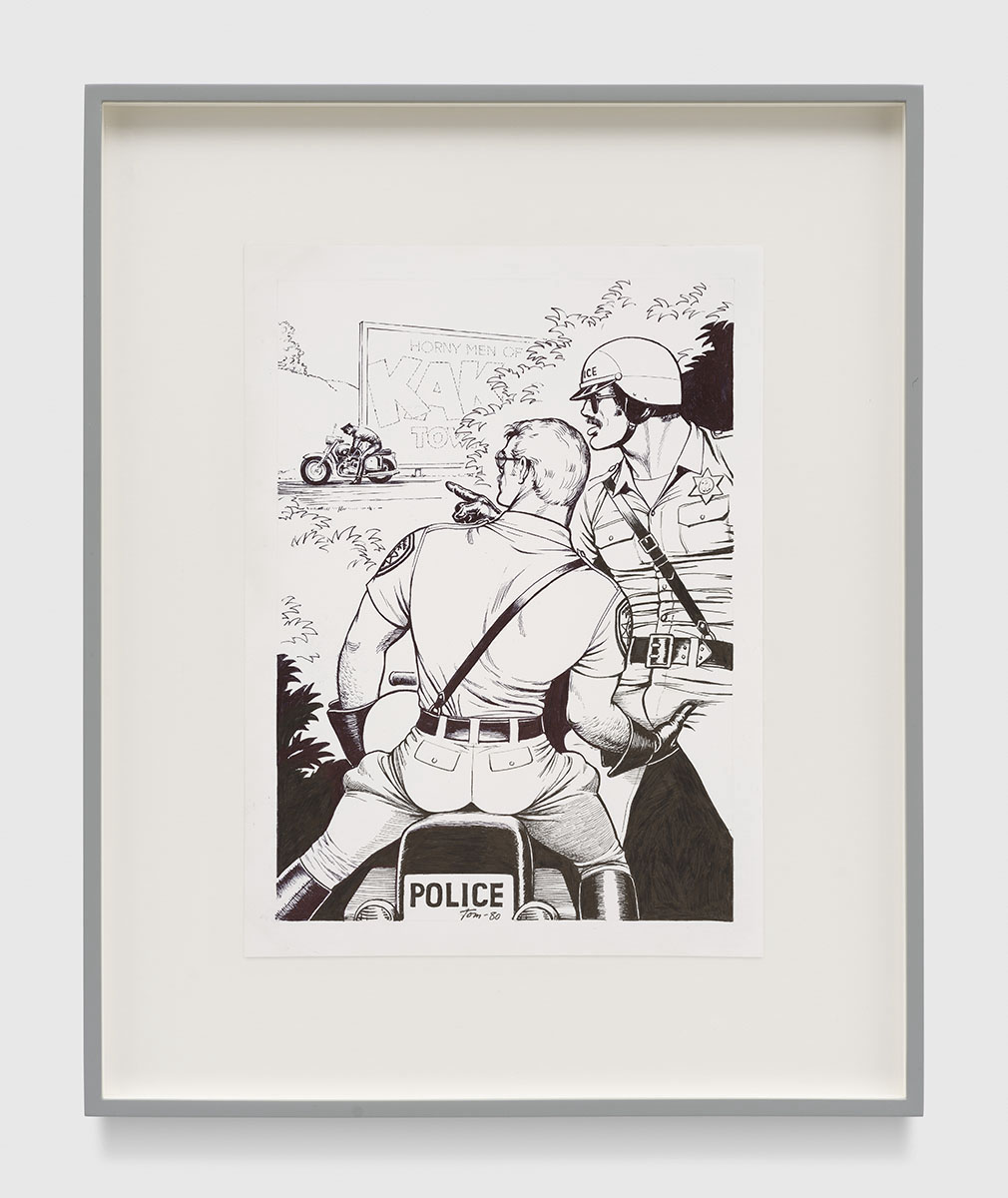 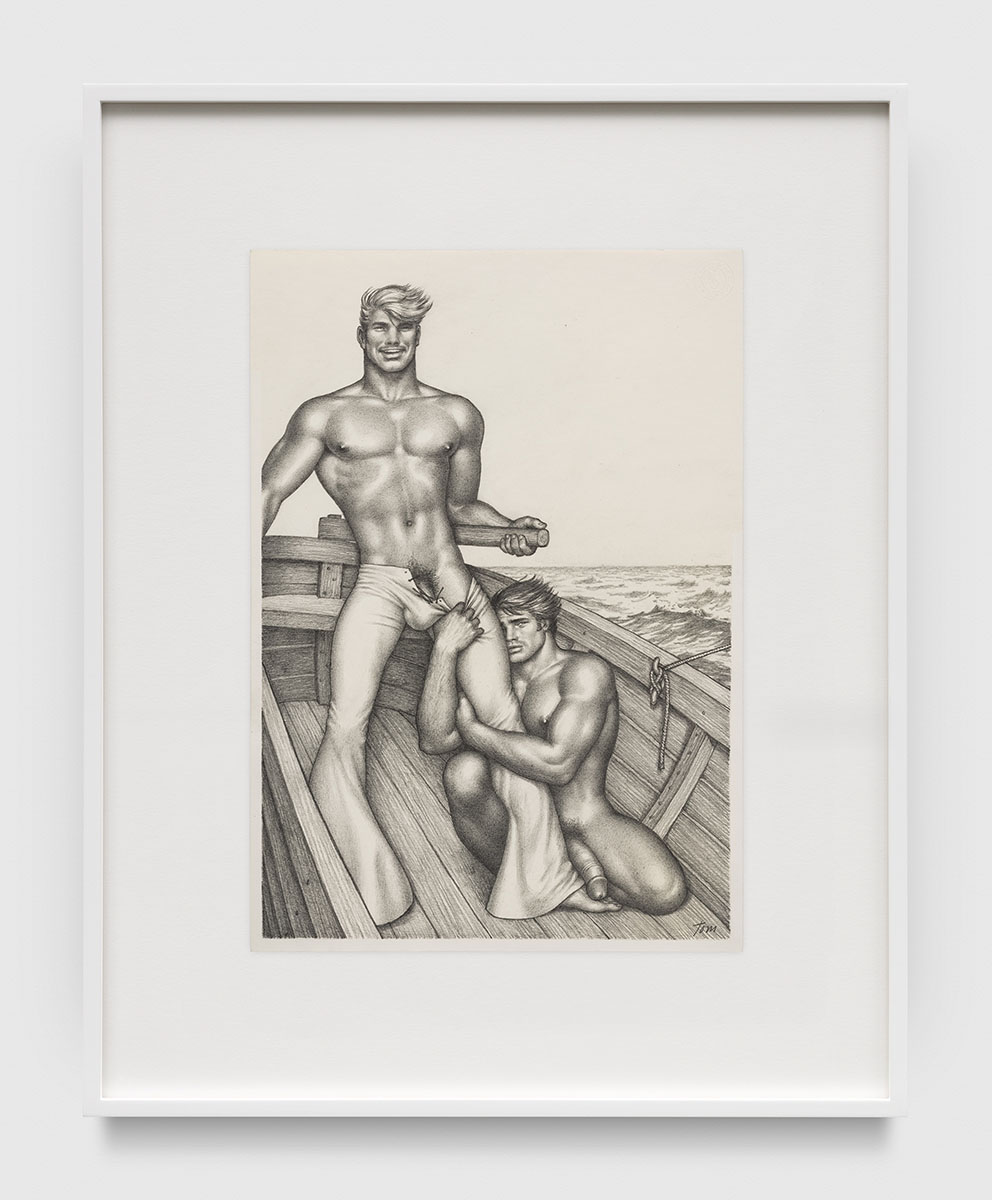 “I don’t even remember there not being a Tom of Finland,” said the writer Brontez Purnell at a panel to launch “Tom of Finland: Highway Patrol, Greasy Rider, and Other Selected Works,” on a rainy January night. David Kordansky Gallery’s recently opened Manhattan outpost was packed to hear him, along with the artist Nayland Blake, the Drawing Center’s chief curator Claire Gilman, and Tom of Finland Foundation co-founder Durk Dehner, all gracefully corralled by the gallery’s Julie Niemi.

The crowd laughed and nodded at Purnell’s impossible truth. Whether or not we were there to see it firsthand, of course, the world existed before Touko Laaksonen began thrusting his technically astonishing, unabashedly explicit illustrations of swole men with swollen members into the hands of anyone who would take it. But it’s true, because once he got around, their sui generis sexiness slipped into the very fabric of 20th-century America.

Tom of Finland took centuries of homoerotic art—from Greek warriors cruising each other across ancient wine vessels through Michelango’s muscle studies, George Platt Lynes’s graphic early-20th-century photographs of male bodies in shadows to Physique Pictorial’s porn-as-wellness-tutorials—as tools. Also in his box? The inflated glamour of advertising and cheap thrills of comics. Both show up in the preparatory collages of male models smoking and leather-clad bikers on their hogs. Across the gallery, illustrations show Tom’s process of isolating the parts of the body that signify masculinity and then queering them.

“Tom was creating alternatives. It’s not that super masculinity was the answer, but it was something that wasn’t there,” Dehner says. “And so he proliferated that, in a form that made sure that his men were homosexual. They were kissing, having sex, and there was a clear message that they were happy. That was his message.”

Two full illustration series prod an understanding of Tom as a progenitor of zines. Both were sold as comic books where laws allowed their distribution—and widely bootlegged elsewhere—between 1968 and 1986. Greasy Rider (1978) is a cowboy fantasia featuring a turtleneck almost as handsome as the trio of rough-and-ready studs hellbent on harnessing the potential of each other’s natural resources. In Highway Patrol (1982), a pair of cops stop feeling each other up just in time to cuff a civilian. Their officer orifices enforce the pleasure principle in every possible arrangement.

Both show off Tom’s undeniable skill as an inker and penciler. The politics are, perhaps, trickier. One could read Greasy as a socialist tract against private property—or a celebration of the thrill of trespassing, which in the end must demand an unequal power dynamic. Highway mostly stays in the lane of eroticizing authority. Here, all cops aren’t bastards, but they might be pigs. Still, as Blake noted during the panel, “When you look at these illustrations, everybody flips. Nobody stays on top forever.”

Except, so far, for Tom himself. There’s little body and gender diversity here, and it’s a little heartbreaking to see how easily his hyper-macho utopia can, in the wrong hands, cool into dystopian body fascism, and worse. And the censorship that kept his work so hard to find through much of the 20th century continues: Instagram and TikTok likely wouldn’t touch most of the work here, so the curious will have to return to the printed page—namely, the accompanying publication with text by Purnell—to see what the fuss is about.

Still, Tom’s legacy erects itself in the grids of Grindr, the abs of every action hero, the riotous interrogative performances of Landon Cider, and hundreds more. “Tom of Finland is a state of mind,” Blake said. And we’re all living in it.

Mexican Craft Shines at a New Boutique Hotel in Colonial Mérida, and Other News