Reykjavík has long served as the gateway to Iceland‘s primeval nature, but as a city it’s never joined the upper ranks of the European hit list. After years of booming tourism to the Nordic island nation that may be changing, with the capital starting to show signs of emergence. The latest indication: The new Ion City, sister to the striking Ion Adventure in Thingvellir National Park, where it stands in isolation among magnificent lava fields and solitary lakes. Rising from downtown’s main artery, Laugarvegur, the brand re-upped with Icelandic-bred, California-based Minarc for the design of its first urban property, which looked to the country’s artisan traditions and rugged landscape for inspiration. Outside, the exterior of the renovated building is adorned in a motif resembling the pattern of a classic wool jumper owned by the founder’s mother; near it is an abstract nature mural by Krístin Morthens, the daughter of celebrated Icelandic artist Tolli Morthens. Inside, the lobby is filled with elements from the countryside, including a living birch tree behind the front desk and a bird’s-nest lighting fixture hanging from the ceiling. The 18 rooms contrast sharp gray hues and colorful window sofas with recycled-wood-paneled walls. Everything, from the bathrobes to the slippers to the bedside throws, is sourced from local designers.

The hotel’s central location means major landmarks are within reach, most notably the Modernist, Guðjón Samúelsson–designed Hallgrímskirkja Church, and crystalline Harpa Concert Hall by Henning Larsen Architects and the Icelandic firm Batteríið Architects. The neighborhood is also home to many of the best restaurants and bars. Add Ion City’s Sumac to the top of that list. Helmed by chef Thrainn Freyr Vigfusson, director of the country’s culinary Olympic team, the menu is characterized by Lebanese and Moroccan-style dishes. Top-notch North African cuisine in Iceland? Just one of the new Reykjavík’s many surprises. 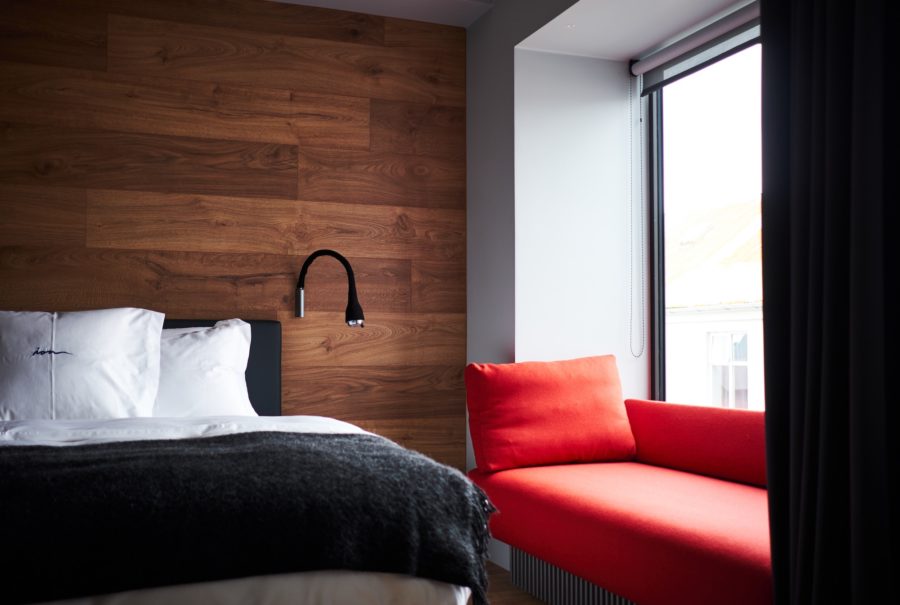 High Above Manhattan, a Retro Cocktail Aerie with No View