Worthless Studios Is Erasing the Art World’s Barriers to Entry

Fresh off the success of the Plywood Protection Project, founder Neil Hamamoto plans to open a state-of-the-art fabrication facility in Brooklyn that offers resources, residencies, and community support to early-career sculptors often overlooked by the art world.

When Neil Hamamoto decided to leave his career in tech and move back to his hometown of New York to become an artist, he wasn’t expecting to find a near-total lack of community facilities for his preferred medium of sculpture. The founder of Worthless Studios, which offers space, materials, and technical assistance to emerging artists, also wasn’t expecting to enter a life-changing era marked by the coronavirus pandemic and widespread protests against systemic racism following the murder of George Floyd. Almost overnight, retailers, restaurants, and luxury brands across New York braced for the civil unrest by boarding up their storefronts with plywood—a valuable material that artists often use when creating sculptures. Plywood prices promptly soared to above $90 for a standard board, which depleted supply across the city and made the material out of reach for most artists.

Struck by the visual roadblock of the newly boarded-up buildings, Hamamoto decided to collect the discarded plywood and redistribute it to artists in his network, who were then tasked to turn it into public sculpture. The Plywood Protection Project was born—over the past few months, Hamamoto and his team worked very closely with the five artists who each used around 40 salvaged plywood boards to create sculpture that was recently unveiled in five boroughs across the city. “This plywood contains cultural, historical, and monetary value that must not go to waste,” he said at the time. “Transforming it into public artwork will honor the movement in ways that our currently standing and recently torn-down monuments cannot.” Over the coming months, each sculpture will host public programming that seeks to engage locals over time and make sure the works don’t simply offer a flash-in-the-pan experience.

In many ways, the Plywood Protection Project feels like an all-too-timely meditation on the issues that impact how New Yorkers—and the world at large—approach public space. It also speaks to Hamamoto’s overarching mission to make Worthless Studios a valuable community resource for emerging artists. Once the Plywood Protection Project wraps up, Hamamoto plans to inaugurate a state-of-the-art fabrication facility that offers studio space and artist residencies for aspiring sculptors in East Williamsburg, Brooklyn. Since real estate comes at a premium in New York, he’s noticed an influx of artists, particularly those working in large-scale sculpture, migrating to less expensive cities after the past year of economic turmoil. He’s confident that by providing space at Worthless Studios to support early-career artists who otherwise lack the resources to establish their own studio space, he’ll foster a valuable creative community—and combat the classism and troubling barriers to entry within the art world.

We recently caught up with Hamamoto, who explains the logic behind the name “Worthless,” the newfound significance of public artwork, and what to expect from his next venture.

Worthless Studios is a relatively young operation. Tell me how you got started and what your goals are.

The impetus comes from my experience returning to New York after being in California for my career in tech. I left that industry to become a sculptor and was looking for an artist community and space that could be a support system. I wanted to focus on wood, so I needed access to woodworking and metalworking tools, as well as technical assistance. Community is also a big part of it—people dropping by, seeing your space, and offering informal critiques of your work. I came from a school with state-of-the-art fabrication facilities for mechanical engineers and artists, and I realized there was a dearth of those resources in New York. Out of that came the idea for Worthless.

How did you decide on the name?

We’re trying to deflect attention from ourselves and offer our platform to artists and projects. “Worthless” also reflects how I felt moving back to New York and the growing competitiveness of the art world. Our approach is to bring art back to craft and process, focusing less on the product, value, and markets. It’s about not feeling that pressure and instead enjoying the craftsmanship, learning, and experience.

You’re most well-known for the Plywood Protection Project, which sourced plywood from boarded-up storefronts last summer and offered it to artists who created public sculptures across New York.

In June 2020, the pandemic was in full swing and we were experiencing major protests after George Floyd’s murder. The idea stemmed from the plywood littering the sightline of New Yorkers who left their home during that time. The streets and storefronts looked much different than normal because they were completely blocked by this material. As a visual artist, I realized that perfectly good material will go to waste when these businesses reopen.

If Worthless Studios aims to support artists’ fabrication and material needs, how could we use this “garbage” to amplify that mission? How could we create a platform that guides and supports artists while uplifting their individual voices? Public space was also at a premium—parks became popular and there was tons of press around public art, the history of monuments, who makes decisions about what monuments go up, and what they represent. Between those three points was the idea to repurpose this plywood that was so contextually and rhetorically charged to talk about the times and put it in the context of public art. We’re trying to continue the conversation and push a new one.

Now that the pandemic is drawing to a close, what do you think public art should stand for?

Public art should be a conversation starter and physical representation of current issues, whether local, national, or global. One thing Worthless aims to do is have our sculptures not only be physically impressive, but stand as a physical totem that represents more than just a visually appealing object. For almost all of our sculptures, we’re working on programming so the artists can engage the community, whether it’s with youth or local organizations.

How does the Plywood Protection Project speak to your overall ethos?

We’re upcycling material from the city, which ties into the component of our name and values. The thread through our public art projects isn’t sustainability per se, but being creative about using what already exists to generate value instead of creating more waste. The Plywood Protection Project is the best example of that.

What were some of the biggest challenges seeing the project through?

The New York City Parks Department has an existing program to support artists who aspire to make public art, but it’s not particularly easy or straightforward. It took five months from our first conversation to get our licensing agreement. That required stamina and our continued belief in the project to push us through that time when we’re working on an expedited timeline where nothing’s happening fast enough while simultaneously waiting for the green light.

Some of the sculptures were also technically challenging. The artists were dreaming big and we had to reassess our modeling and fabrication approaches, but I enjoy ideating ways to problem solve and physically work through issues. 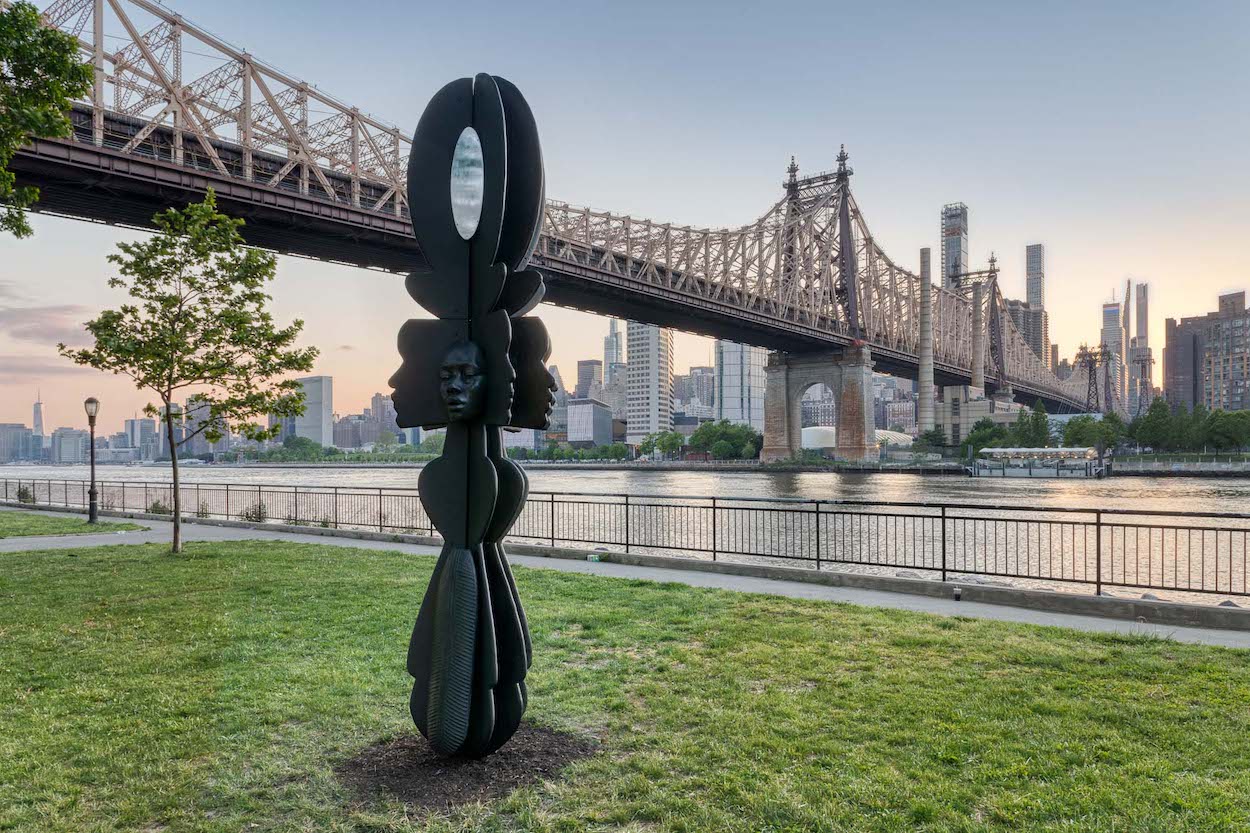 What are you most proud of having achieved with the project so far?

The overwhelmingly positive feedback, but artists are core to that. They’re who this whole project was set up to support. Also, hearing from the public that they think it’s thought-provoking and starting conversations.

You’re opening a permanent space in Brooklyn next year. What are your plans for that?

We just closed on a warehouse in East Williamsburg! I look at our organization as having two arms—the main one involves public art and exhibitions, but with the facility we get to expand into the second arm: the fabrication aspect. It’ll be outfitted with state-of-the-art equipment for woodworking, metalworking, ceramics, and analog photography.

The facility will also host artists for a biannual residency program, where artists will create individual bodies of work and learn new skills. We’re also aiming to have a small exhibition space but without the stigma of galleries. All the work shown will come straight from our fabrication facility, so it’ll feel much more community-oriented.

I feel like there’s no better place to be doing this than in East Williamsburg.

We’ll be at 7 Knickerbocker Avenue right in between Luhring Augustine Gallery and Clearing Gallery, so there’s already a good existing network of those upper echelon gallery spaces as well as a ton of existing artist studios and spaces.. Roberta’s Pizza is two blocks away. With the right approach to this building project, we’re not parachuting in the neighborhood. We want the facility to become the product of a real open-source conversation about what the artists and creative network needs both in that area and the city at large.

Investing in the infrastructure of fabrication enables us to become a resource for other organizations trying to do the same thing. It doesn’t make sense for every organization to pay for a huge workshop. Worthless Studios can focus on that, and we can support outside artists in the doing, getting dirty, the cutting of wood, the welding, and so on.

We want to democratize access to workshop and exhibition space as much as possible without falling victim to mission misalignment. Our mission is to support emerging New York artists with residencies. For public art, we have slightly more flexibility to go global and bring in artists talking about important issues in Mexico, Europe, or Asia.

What are you most excited about in this next chapter?

Everything. This is a huge step for us. A year ago, people would’ve said “you’re crazy” to the idea of brick-and-mortar. It has a ton of operating and maintenance costs, but it’s so essential to the artist’s practice. Artists are champions of navigating physical space, whether throwing a brush stroke or choreographing a performance. It all takes physical space. The facility offers footing as an organization. Our long-term plan is to be a cornerstone for arts in the area.

As a local, it’s exciting to have this resource be available to artists, especially this year of financial struggle.

Because of high real estate prices and the overhead to get a shop started, I’m seeing fewer sculptors in my network. It’s odd how the nature of New York City determines what type of artists can exist here. If this continues, we’ll only have sculptors in L.A., where many friends have moved because space is cheaper. What we’ll see is classism continuing to grow, which is a huge issue in the art world. Only artists who can afford to have their own space and buy materials can create work, and naturally are the only ones with successful careers. Our facility will combat that.

Worthless Studios is a member of The List , the destination for all things Surface -approved. Want to join The List ? Contact our team to find out how to apply.