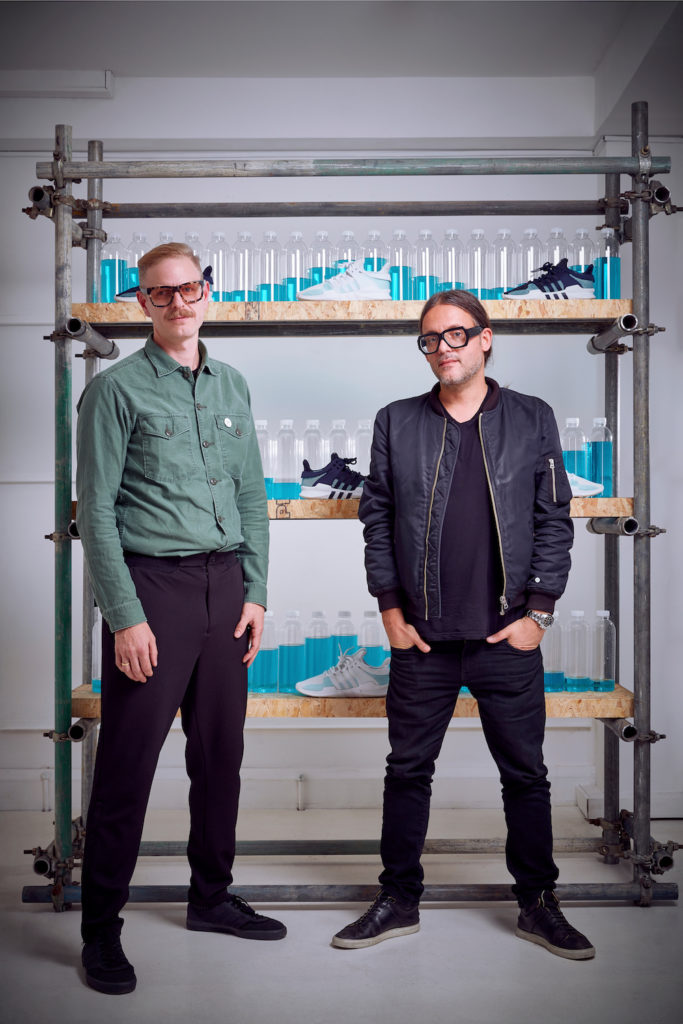 The footwear company’s senior design director and the nonprofit’s founder tell us about turning a seemingly impossible idea into reality.

Produced by Surface Studios in partnership with Adidas Originals and Parley for the Oceans
Photos by Mark Cocksedge October 13, 2017
Share
Back

The footwear company’s senior design director and the nonprofit’s founder tell us about turning a seemingly impossible idea into reality.

Produced by Surface Studios in partnership with Adidas Originals and Parley for the Oceans
Photos by Mark Cocksedge October 13, 2017

Adidas Originals lit up the sneaker blogs last year when it unveiled a limited run of unusual performance running shoes. Viral images showed a sneaker made of thread that came from a massive net discarded by an illegal fishing vessel. An environmental activist whose own ship had been pursuing the poachers for more than two months pulled up the plastic netting. The nonprofit Parley for the Oceans acquired it and teamed up with Adidas Originals to turn it into 50 pairs of the experimental shoe. Since then, Parley and the R & D team at Adidas Originals have developed a reliable way to scale the process, making large quantities of sneaker material from plastic salvaged from oceans and beaches.

The result debuts today. The new Adidas Originals EQT Support ADV made with Parley Ocean Plastic reinvents the classic EQT design—in white or navy with aqua details—using thread made from discarded materials. At a preview in London last week, Surface sat down with Adidas Originals senior design director Erman Aykurt and Parley founder Cyrill Gutsch to talk about the collaboration, Parley’s research island in the Maldives, and the persistence required to sell a giant company on an impossible idea.

Erman, the sneaker industry doesn’t have the greatest reputation when it comes to oceans. Over the years, more than a few images of fleets of trainers bobbing prominently above the debris in the North Pacific Gyre stood in to illustrate the problem of ocean pollution. Was working with Parley a strategy to combat that image?

Erman Aykurt: In the industry, there was an anxiety about touch environmental issues because you can’t be perfect right away. Around 2000, we agreed on going out with a declaration of change and intent, but not with the solution. Adidas would stand up and say, “Yes, we know that we’re using materials that are not good for the environment, and we’re doing it today, and we’re going to do it also tomorrow, but after tomorrow we are not doing it.”

We accept and we own the problem. We are transparent around the problem, and we are addressing it aggressively. Adidas was never in this for this one stunt.”

Why was Parley the right partner to bring on?

Aykurt: What Parley provided was an idea of sustainability that was resonating with a lot of people, and it was a very similar approach to the subject of eco-innovation, which aligned with the way Adidas was working. We were not only trying to collaborate with external sources, but also letting them in. Rather than creating a one-time collaboration, you embark together on a journey.

Cyrill, when you started Parley why did Adidas Originals become your core partner?

Cyrill Gutsch: Because I grew up with that brand. Being a German, but also working previously as a designer, I got to know Adidas as an organization where collaboration is really built into its DNA.

We were very clear in what we want to achieve, but we didn’t say how we were going to do it. Often when you talk to organizations, they are really anxious about being very defined when it comes to a road map. You can’t do that in a process of innovation and change.

How did that collaboration result in this new design?

Gutsch: I first want to say that the partnership between Adidas and Parley is much bigger than the product that you see. It’s really a collaboration between two organizations: a small one that can afford to ask the impossible ask, and a big one that has to actually follow through once they commit. The products that come out are doors into this world that we create together. It’s not that these products are the results. They are really just reminders of where we stand at this moment.

How do you collect waste plastic at a scale large enough to support putting these shoes into production?

The active interception is really organized by affiliations of ours. For example, in the Maldives we have a local chapter that organizes all the logistics. The team makes sure that we are collecting material from the high sea, remote islands,underwater, and from beaches. But also from remote communities where they normally would discard it either to the beach again, or toss it somewhere and burn it, or even bury it. The active part is creating a solid stream of trash, pre-sorting it in our stations, packing it, and making deals with shipping companies to carry it in containers that normally return from these islands empty.

Are there plans to replicate this in other places in the world?

Gutsch: Yes. It’s all about creating a tool kit. We’re developing a modular plant system for collecting plastic. Some areas can have smaller plants and others will have bigger ones that allow you to process all the material that you find on site. They will also serve as a demo plant where you educate locals and train people. The other [tool] is collaborations within these countries. It’s pretty much like creating a base station.

How did you reinterpret a classic Adidas design with this material?

Aykurt: Of course, there are certain lines on the [classic EQT] shoe that became iconic with the audience. We were looking for ways to use Parley yarn to replicate the visuals, but also the technical properties of the original. For example, on the side, there is an embroidery pattern that substitutes an additional piece of material that would normally be there to reinforce the upper.

Gutsch: So instead of using a solid piece of plastic to stabilize it, they found a way to cut down the use of material and only use one material type, which made the recycling process way easier later. It’s all follows a strategy of reducing the variety of materials in a product.

How did you arrive at the right type of yarn?

Gutsch: When we started Parley, we worked first with smaller yarn makers. They couldn’t provide the quality, or they couldn’t provide the consistency. Then Adidas tells us, “Listen man, we have to take a different approach. Let’s work with the best vendors in our supply chain. We hand them over to you. We help you. We mentor you.” They enabled us and made us build a global supply chain.

Adidas seems to have taken a big bet.

Gutsch: People looked at me back then and thought I was crazy wanting to turn the shit that we collect on the beaches into a high-performance product. They laughed at me.

Aykurt: You basically came in with a big sledgehammer and created a lot of free radicals that were immediately there to form new ideas.

Gutsch: That was the surprising thing. Adidas never said, “Get the fuck out of here.” I think that comes from being so used to working with collaborators. It’s the crazy strength at Adidas. They deal with freaks all the time: athletes, designers, physicians. People who have weird ideas—Adidas empowers them.

Has all of this paid off for Adidas?

Aykurt: You have no idea how many doors have opened because I had a pair of very exclusive sneakers in my arm. It’s crazy. It’s the magic of shoes. There are a lot of people that support Parley, like actors or artists, who normally would not like to be associated with a big brand.

In June, Adidas committed to stopping use of newly made “virgin” plastics in its manufacturing process. How is that even going to be possible?

Aykurt: We don’t know. The low hanging fruit have been addressed, like phasing out packaging items, questioning substances, changing material strategies. Now it goes to the more complicated stuff. What that actually means is a lot more R & D, and we will not be able to do that overnight. This is a very interesting moment in time where we’ve created the awareness out there, we’ve created the climate of change, but we don’t have the answers.

Gutsch: Perfectionism is the enemy of innovation. You have to allow yourself to do the best that you can and to redefine your benchmarks every day.

This interview was conceived, produced, and edited by Surface Studios, the creative agency of Surface Media.