A New D.C. Concert Venue Is Ready to Rock

A new music venue by Rockwell Group anchors the Wharf, a cluster of mid-rise towers recently developed along the Potomac River in Washington, D.C. While the surrounding architecture veers toward bland glass boxes, the concert hall, fronted by soaring concrete columns and a broad marquee spelling out its name, The Anthem, lends the neighborhood some much-needed heft, and gives the city an unusual amenity. “We were trying to find a way to fill a niche in the music world that was totally missing,” says Rockwell Group associate principal Michael Fischer, who led the design team, “something between a club and an arena.” The hall can hold up to 6,000 people, accommodating performers touring large venues—Bob Dylan, the Foo Fighters, and Lorde were among the first shows announced—in a more intimate space. The performance hall crosses a grand theater with a raw gymnasium at an industrial scale. The pattern on the backlit, perforated metal panels that cover the proscenium and balustrades channels an opera house by way of political-rally bunting. A full-height atrium looks up to the transparent underside of a swimming pool—an exhibitionist amenity for one of the adjacent buildings. Not waking the neighbors was a challenge. “On paper it’s supposed to work,” says Fischer of the building’s acoustical accommodations. “It wasn’t until they really fired up the sound system and sent out some scouts that we knew we had pulled it off.” 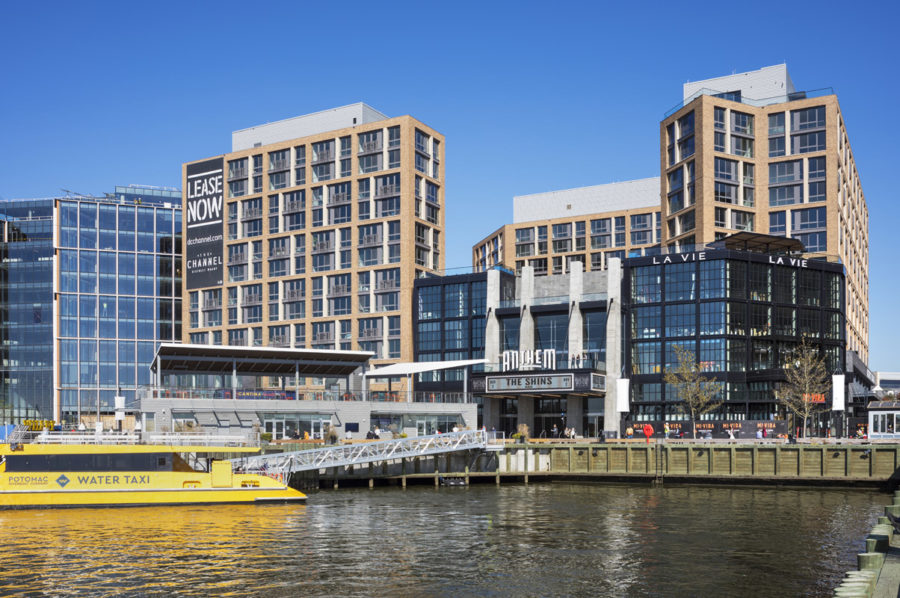