A grunge-era roadie tweaks words and typefaces to capture the world’s attention.

BY SHEILA MARIKAR
PHOTOS BY DANNY ZAPALAC November 28, 2016
Share
Back

Anyone under the impression that Los Angeles is an endless sprawl of açai bowls and step-and-repeat banners need only visit the studio of Cali Thornhill DeWitt to discover those stereotypes are on point, occasionally, but not absolute.

His place, on the fourth floor of a building near Skid Row, is caked in grit and accessible by gilded elevator, the doors of which DeWitt opens with a full-body shove. He fits right in: gold teeth, tattooed arms (“Ready to Die” on his left, “Burn it Down” on the right). Plastic signs in various stages of completeness lean against the walls. There’s a glamour shot of a model holding a rose to her Wesselmann-red lips, framed by the words “EATING GARBAGE.”

“Do you smoke?” DeWitt asks, pulling a pack of Lucky Strikes from his pocket.  “I just ask because you can’t smoke inside anymore.” Here, you can.

DeWitt, 43, embodies a bygone era, but recently, he found himself at the forefront of this one. In February, he received a phone call from Kanye West, who wanted him to design a line of clothing for his latest album, The Life of Pablo. The sweatshirts, T-shirts, and denim jackets have since become ubiquitous, with “Pablo” proclamations rendered in gothic letters, sometimes in the shape of a tombstone. “If I go to Santee Alley, there’s bootlegs of Kanye shit all over,” says DeWitt. “I think that’s the best.”

Raised in Calabasas—which was a sleepy stretch of the San Fernando valley before it became famous for housing West’s in-laws—DeWitt was a punk who spent his time sketching and skateboarding. He dropped out of high school to hang out at Jabberjaw, an underground rock venue frequented by Kurt Cobain and Courtney Love, and sometimes made fliers for their shows. “I liked doing that,” says DeWitt. “It was a language I knew. Growing up with punk records, and do-it-yourself layouts, the look of that was inspiring to me. I thought that if I could make a flier for a band I like, that would be a big deal.”

Love brought DeWitt on as a roadie for Hole’s first tour; he got paid $12 a day. At 17, he became a nanny for her 4v-month-old daughter, Frances Bean. DeWitt followed the first family of grunge to Seattle, and after Cobain’s suicide he fell into a tailspin of drugs and alcohol. “I was a fuck-up,” he says. “Just kind of a garbage can of abuse. Self-destruction, to me, is an old, boring story with the same answer and the same results. I think a lot of young people, all ages of people, glamorize and romanticize that, and I found it to be untrue. I don’t think it was cute.”

Just before his 28th birthday, DeWitt says he got sober, recounting the story while swigging from a bottle of Mexican club soda. He came back to California to bartend. Seven years slipped by. He got a job designing art books for a friend who worked in publishing. “I wasn’t like, ‘Fuck I love typefaces,’” he says, but playing with text and images brought him back to his flier art days, and he started creating signs on the side. In 2006, he started an alternative record label, Teenage Teardrops, and two years later, co-founded the Hope art gallery in Echo Park. He befriended artists like Peter Sutherland, who did a show there. “He was very prolific, but it was kind of a zine and photography level,” Sutherland says. “Small stuff.” Over the years, DeWitt gained a reputation among like-minded creators. “I think the way he approaches art is very honest,” Sutherland says. “It’s not like he’s just making work that belongs in a gallery. It’s kind of open.”

Three and a half years ago, a gallery in Tokyo offered him a solo show—his first outside L.A. “I talked to my wife about it and I was like, ‘Am I having a midlife crisis?’” DeWitt says. “She said, ‘Our bills are nothing.’ She encouraged me to do it. I was like, ‘Okay, I’ll figure out a way to make this much every month to pay for our life.’”

The Tokyo show featured a few sweatshirts with gothic lettering, which DeWitt first encountered at Southern California swap meets in the ’80s, when people made them as memorials to loved ones lost. Five years ago, while driving around L.A., he got the idea of making sweatshirts dedicated to old Hollywood icons like Judy Garland, Marlene Dietrich, and Marilyn Monroe. He wrote down 20 names and sped to the meet. When he got there, he discovered that the sweatshirt-making station was gone, rendered obsolete by digital printing. It took him six months to track down the lettering he had in mind. His Marilyn sweatshirt eventually got made and noticed, and in 2014, Virgil Abloh, West’s longtime creative consultant, reached out to DeWitt to collaborate on pieces for his clothing line, Off-White.

“The sweatshirts that I make aren’t for sale,” says DeWitt. “I’ll only trade them with people I know because it was fun to have something that people wanted that they couldn’t buy. I mean, it’s infuriating for some people, I guess, but you can buy anything now.”

DeWitt’s sweatshirts have become so recognizable that during the presidential campaign Hillary Clinton supporters copied their style for a line of feminist merch, replacing “Pablo” with “Hillz.” “I think that’s cool,” DeWitt says. “To me, that was born in the swap meet and the flea market and I wanted it to return there, and now it has.” He’s moving on. “I like that font, I like those shirts,” he says. “I don’t want to make them for the rest of my life.”

It’s been a long, strange trip from the underbelly of the rock world to the international art scene. For a recent show at Copenhagen’s V1 and Eighteen galleries, DeWitt printed macabre references to U.S. history on 29 American flags. Now he’s slapping names of prescription painkillers on top of images of the earth as seen from space. A guy named Tyrone makes DeWitt’s signs in a market around the corner from his studio, one of those places with innumerable stalls that sell everything from candy to christening outfits.

After a few Luckies, DeWitt gets the idea to go down there and check on a “Xanax” sign that’s supposed to be done this afternoon. He and Tyrone grin and slap backs. (Tyrone thinks DeWitt’s name is Mark; they’ve known each other too long for DeWitt to correct him.) Stacks of generic store proclamations line the walls: “Cash only,” “No refund or exchange,” “Sales tax not included.” “Tyrone, how many signs have we made?” DeWitt asks. “Eighty,” Tyrone responds, before correcting him. “Not signs,” he says. “Pieces.” 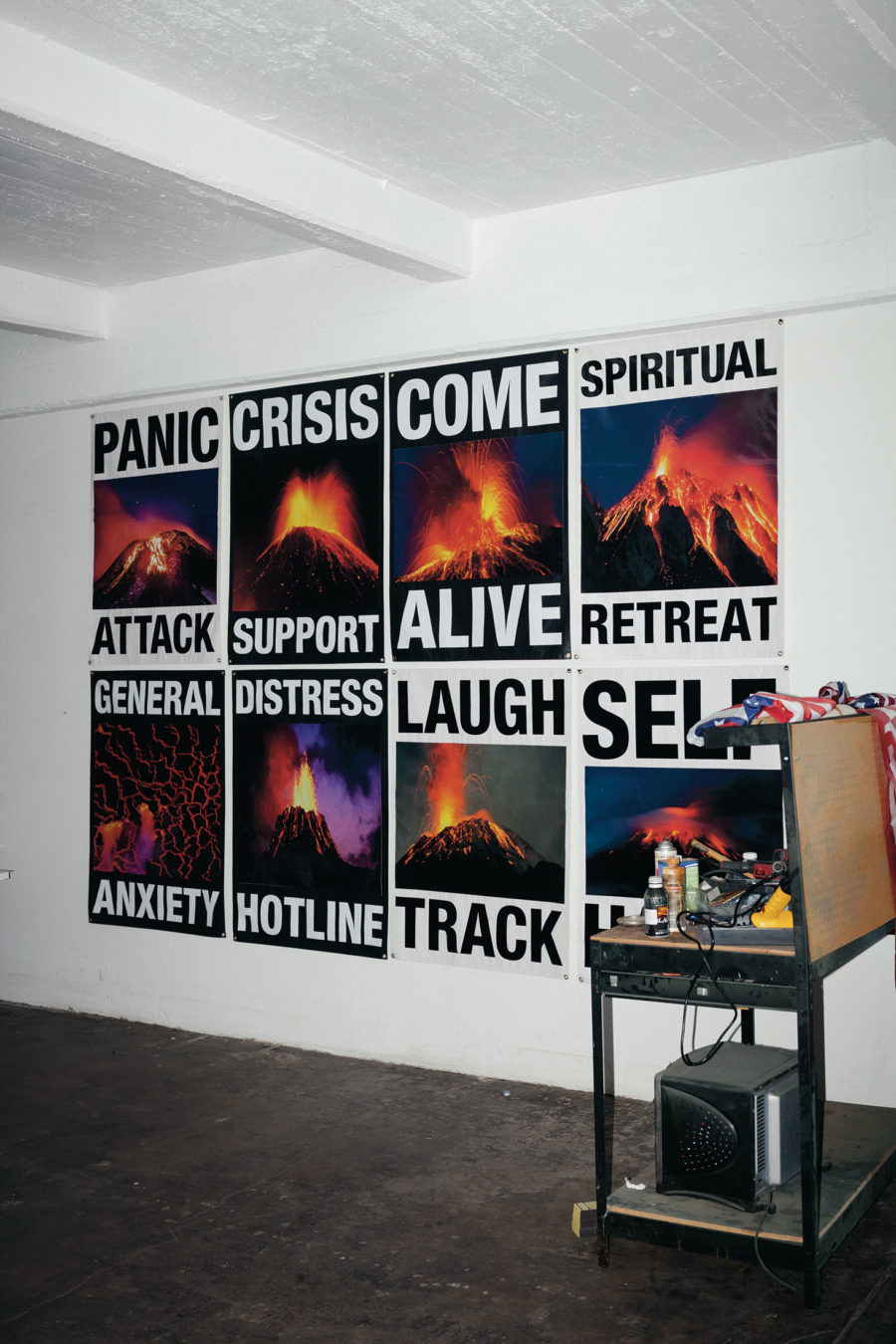