One writer sees the tony fabric’s recent renaissance as a sign of the fraught times we live in.

By Rachel Syme
Illustration by Nicolas Ortega February 27, 2017
Share
Back

Why wear velvet? This does not seem like it should be a moral question.

For one thing, it’s beautiful—shiny and supple. It makes the wearer feel like a Borghese. And yet, it is undeniable as an indulgence. It broadcasts a flamboyance that cannot escape its own historical connotations as the fabric of royalty. Lest we forget, it was England’s tyrannous King Richard II who, in 1399, demanded to be buried in velvet, even as he starved to death in captivity. Velvet carries with it the legacy of that final request: that need to be swaddled in heavy soft jewel tones, that desire to be wrapped forever in excess.

Of course, it also carries other legacies: witch capes and mod blazers, ribbons wrapped around Victorian necks, opera wraps and merchant movements across countries and centuries. But mostly, it looks rich. And in 2017, as velvet is suddenly everywhere again, one must stop to wonder: whence the imperative to look rich when the world feels like it has gone into crisis mode? Is it gauche to drape the body in velvet when so many bodies are in peril? And moreover, velvet is not a fabric made for function. Right now, as everyone is trying to decipher how to be useful, how to provide a function in a volatile political climate, there is a tacit statement made by purposefully wearing garments that serve as pure adornments.

Take, for example, velvet boots, which are a study in contradiction, a beautiful futility. For one thing, they were not made for walking. To step the city streets in boots made of real, plush velvet is to risk immediate damage; they bruise and blemish as easily as an autumn peach. They are not meant to encounter rain, mud, dust, humidity, grass, oil slicks, cigarette ashes, or anything else that might crawl underfoot during a typical day. Really they’re just very expensive indoor slippers molded into the shape of rugged footwear—a kind of cruel joke for the wallet. And, unlike leather boots that age like scotch with each passing year of mossy foot sweat, the moment a velvet shoe starts to melt, it’s over. There is no returning to that pillowy, regal sheen. 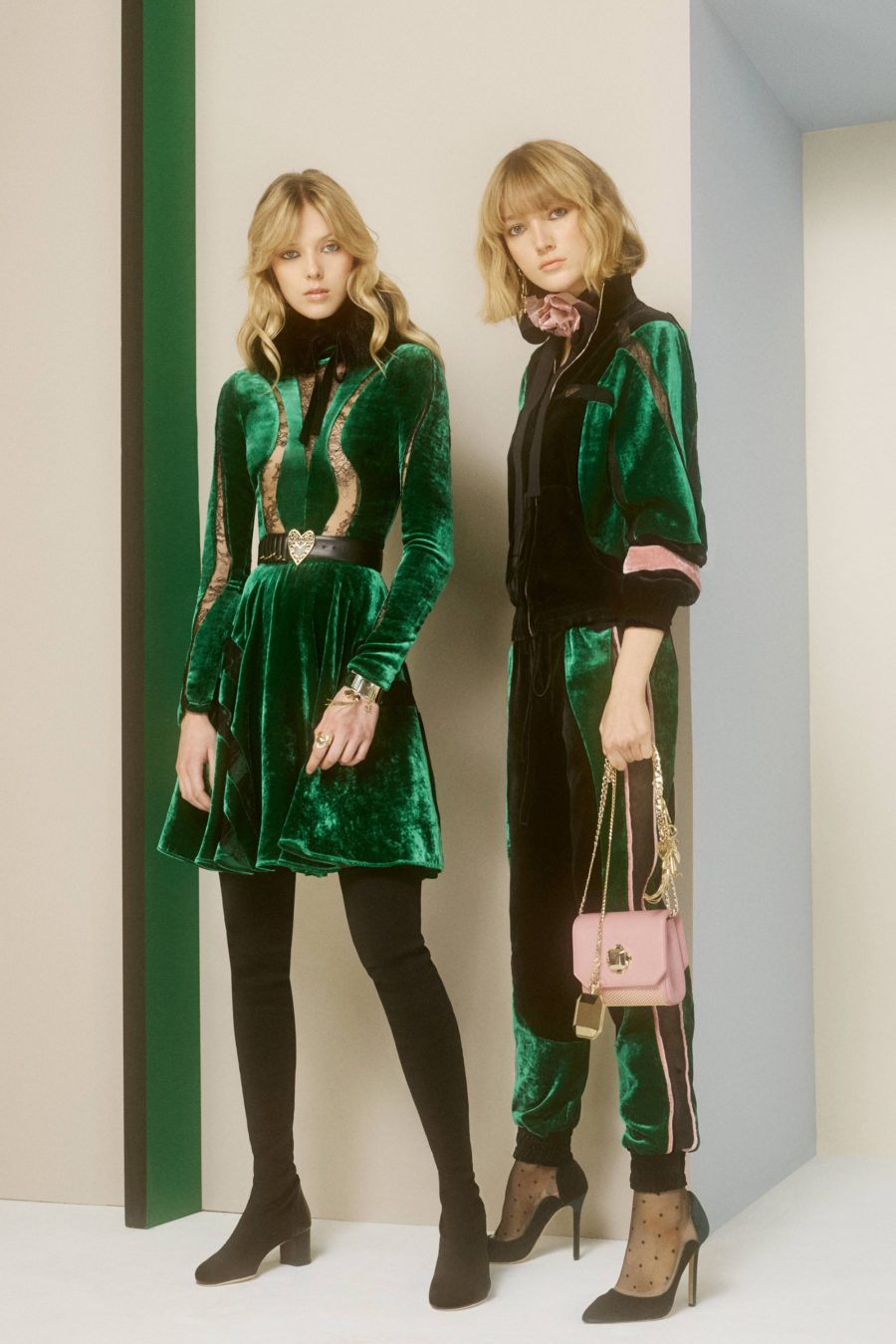 10
Slideshow
Velvet on the Runway
…

And yet, delicate as it may be, velvet footwear is all the rage for spring. Not just boots, but mules, and sandals, and platforms have been popping up in stores since fall along with their cheesy cousins made of velour, the shoe equivalent of a burner phone. And the impracticality is not just happening below the knee: the newest coveted item (if Instagram It Girls are any indication) is the velvet bikini (the Jenner sisters love them). Though some of the swimwear is made from “stretch velvet,” a spandex-like hybrid that can be submerged, these suits are not really meant for the water. That’s not what they are about. They are made to look luscious; they imply a lack of need to get in and splash around. These suits are post-swimming, pure ornament.

The thing about velvet, which has been streaming into stores for months now and is about to become a flood once the Spring lines hit—Victoria Beckham, Elie Saab, Ellery, Sies Marjan, and others showed dozens such looks for men and women—is that it is the quickest way to look gilded; it contains within its dense threads centuries of pomp, an entire history of embellishment. It is difficult to look cheap wearing real velvet—tacky, sure (there are velvet cowboy hats, velvet chaps, velvet fanny packs), but there is an essential excess to each velvet garment that implies an overflow of resources. Even a velvet tracksuit whispers a message of abundance: what folly it is to run around in a sporting outfit that was never made to be perspired in, what good fortune one must have.

This is not to say that all velvet is sold at the price of saffron, or even unwearable on a daily basis—it’s just that it has never been a material that belonged to the quotidian. It was invented in Baghdad and moved from Egypt to 14th century Italy where it began to captivate the adoration of both the clergy and nobility. It was so soft, and so shiny, and so difficult to make—a double loom and fine silks were required. Even as industrial production has brought the costs down (though the best velvet still costs hundreds of dollars per yard), it has never quite outgrown the legacy of being an oligarchic material, the designated fabric of those who designate themselves important. It has an operatic air of grandeur, a liturgical intensity, an implied rococo richesse that it will never shake. If you put on velvet, you feel swaddled in this tradition, perhaps even suffocated by it. Velvet is heavy, both in weight and in spirit.

So why is it back? Fashion comes in cycles, to everything there is a season. The ’90s revival (a choker for every neck!) may be to blame, though that decade was more known for crushed velvet, or panne, a kind of ruined version of the original.

Victoria Beckham showed full suits of it in navy and lavender and seafoam green, D&G sent men down the runway in full capes with ornate fringe—but the return of panne seems to say something about where designers thought we were heading this year. There is a sense, when velvet returns, that fulsomeness and glut are also back in vogue.

For a moment, the velvet renaissance felt like a kind of optimism, as if we would all be wearing downy caftans as we embraced the new future, even as our bodies melted further and further into our avatars in the digital cloud. Velvet is nothing if not extremely corporeal, it demands touching, petting, inhabiting. It invites others to reach out and stroke you. And perhaps, last year, when fashion designers (and the rest of us) were blissfully unaware of how dramatically this year would begin, the idea of blowing a rent check on a jacket that everyone wanted to touch felt strangely big-hearted. Perhaps the designers just wanted to give the people a chance to peacock, to be seen, to feel buttery and exquisite.

But now, as 2017 unfolds in waves of anxiety and unrest, something feels extremely discordant about the boxes of velvet sundresses that are currently en route to department stores. So many are not eating the metaphorical cake—they are instead making signs and tossing on sensible footwear to move into the streets. Velvet is an impractical idea, a dream of lounging like a kittenish odalisque, and we are not in a cultural moment built for repose. This is not a moment made for boots that bruise. It will be interesting to see who wears velvet in the coming year, who posts a picture of themselves in gilded house slippers, who can afford that kind of sumptuous leisure.

This is not to say we should abandon velvet altogether. There is a radical feeling of magnificence that can come from being draped in a thick cloak of the stuff, a sense that it has traveled through history and so, in turn, shall we. We can and should still yearn for beauty where we can find it. But the association of luxury with the abstract, the rise of the afunctional bikini, may seem less appropriate in a time when we are all simply trying to stay afloat.