Surface magazine’s editor-in-chief, Spencer Bailey, spoke with Mette Hay and Emmanuel Plat about their respective evolutions in the world of design and how the HAY and MoMA Design Store collaboration came to be.

Surface magazine’s editor-in-chief, Spencer Bailey, spoke with Mette Hay and Emmanuel Plat about their respective evolutions in the world of design and how the HAY and MoMA Design Store collaboration came to be.

On Thursday, March 29, Surface hosted the 44th installment of its Design Dialogues series. This edition, moderated by Surface editor-in-chief Spencer Bailey, featured Mette Hay, cofounder and creative director of HAY Design, alongside Emmanuel Plat, director of merchandising for MoMA Design Store and took place at the MoMA Design Store in New York City’s SoHo. Guests—including Todd Bracher, Lidewij Edelkoort, Stephanie Goto, and Anne Rieselbach—enjoyed the conversation, which focused on importance of making design accessible and how the two companies have worked to bring great design to the mass market, specifically in their collaboration of the HAY Mini Market and HAY Kitchen Market at MoMA Design Store, Soho.

Bailey kicked off the conversation by asking Hay and Plat to share their paths to the design industry. Hay spoke about how she grew up working in her family’s design store in Denmark, tracing her obsession to childhood. “Going with my parents to Hamburg in Germany to visit the Conran Shop there—that was for me the biggest thing in life because they had all the small objects together with furniture.” Plat described his first encounter with design as “accidental,” having left a career in publishing to work for Terence Conran. “The exposure that I had there in terms of products,” Plat said, “but also the philosophy [of] the merchandising, the attention to display—the way a product that you may find somewhere else is merchandised—makes it wholly different.”

Hay and Plat first met in 2014 in Japan, where HAY had launched one of its HAY Mini Markets in Tokyo. Having seen iterations of the market in Milan at Salone del Mobile and at Selfridges in London that same year, Plat was drawn to HAY’s  “groundbreaking” concept of merchandising furniture and small home accessories together as a market or cohesive environment. Plat said, “Very early on, [they were] very strong and talented at identifying young and emerging designers and bringing them on in their roster. Beyond that, they are also very smart and intelligent about merchandising. I think that was really fresh and inspiring for a lot of people.”

When Plat visited with Mette and Rolf (Hay’s husband and HAY cofounder) in Denmark in early 2015 their collaboration commenced. Originally meant to be a short-term pop up, the in-store concept was so popular and well received that it became a mainstay, with HAY refreshing the products and presentation every three months. One aspect that both Plat and Hay highlight as part of the success of the project is the accessible price point of the collection. “When I was younger, furniture stores were someplace you didn’t dare to walk in,” said Hay. “The whole scene of design has [become] much more for everybody. We wanted to make environments and places in our store which were very open and friendly.”

Plat and Hay were in agreement that the consumer experience is at the center of success in retail. When Bailey asked about the current state of the field, Plat said, “Obviously the landscape has changed dramatically with technology and internet. The way we shop today—and this is aa cliché—is totally different [from] the way we shopped even a decade ago. The companies that are successful are the ones that understand how to best use each channel.” Hay also spoke about the importance of understanding the customer experience as having been paramount when HAY was first starting out, and how it was the impetus behind their opening a store in Copenhagen, instead of a showroom: “We wanted to be in touch with the end customer,” said Hay. Plat explained that engaging the customer is the way that MoMA Design Store has been able create a bridge between their online shop and their retail experience. “It is always hard to know where the customer comes from,” said Plat. “This is why I think it’s essential to maintain the experience in brick-and-mortar, which is really [the] unique [experience].” 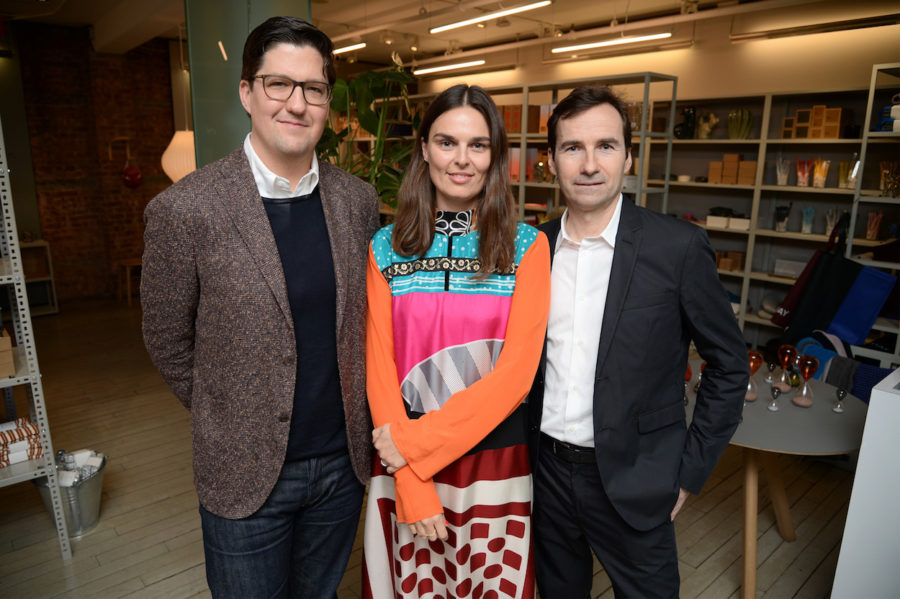