How It’s Made: Blu Dot

Twenty years after its founding, the furniture maker continues its mission to democratize design.

Twenty years after its founding, the furniture maker continues its mission to democratize design.

By Courtney Kenefick
Photos by Ackerman + Gruber and Valerio Vincenzo

Describing the Blu Dot brand is like talking about a good friend. The Minneapolis-based furniture company is disarmingly down-to-earth—a refreshing trait in an industry in which name-dropping celebrity designers is the norm. Its brand voice is fun, with a distinctly tongue-in-cheek personality, without being arrogant. At its headquarters, housed in a converted warehouse, executive doors remain open, and employees work hard, but are quick with a quip or a self-deprecating joke. The company’s branding includes subtle winks, such as fabrics named after disgraced politicians (Nixon Dusk is an umber cotton blend) and products with monikers like Son of a Bench and SHILF (a play on DILF, to describe a particularly desirable shelf).

Twenty years ago, when Blu Dot was founded, the space between companies such as Ikea and high-end furniture labels such as B&B Italia and Herman Miller, was unoccupied. So, three college buddies set out to fill it with design-forward and easily accessible home products. The first collection included 18 pieces, ranging from a magazine rack to a modular shelving unit called the Chicago 8 Box, which remains in production today. Now, the 145-person company produces a full assortment of modern home goods spanning bedroom and living room furniture, storage, lighting, and accessories for stores across the world, including spaces in New York, Mexico City, and Sydney.

Blu Dot’s current modus operandi remains true to the way CEO John Christakos and COO Maurice Blanks imagined it when they founded it, with their friend Charlie Lazor. “Everybody’s invited to our party,” Christakos says. The trio, then recent college grads who had studied architecture and art, found common ground in their attraction to a minimalist aesthetic while traveling through Asia in 1988. “You were screwed if you liked design, but couldn’t afford the fancy stuff,” Christakos says. And with that, the seeds of a new kind of furniture-design company were planted.

Once back stateside, Christakos, Blanks, and Lazor went their separate ways, pursuing careers and degrees in three different cities. Still, the vision they had when they were abroad was always on their minds and the lines of communication stayed open. “We were faxing back and forth about what we wanted this business to be,” Christakos says. “It’s amazing to read them now,” Blanks adds. “Because even before launching the company, it was a lot of the same language we use today: modern, good quality, discipline, humor, humility.”

Those fax conversations came to life during grueling weekend gatherings at Christakos’s Minneapolis apartment, despite all three designers holding full-time jobs. “We would roll butcher paper out and draw, design, and riff off each other,” Christakos says. “But we never put a single name on a design. It was such a collaborative effort that it didn’t feel right.” In 1997, they loaded their first products into a pickup truck, and drove to New York for the International Contemporary Furniture Fair. That’s when Blu Dot, a name that came to them after they realized there’s no way to look up an actual blue dot in the phone book, took off. 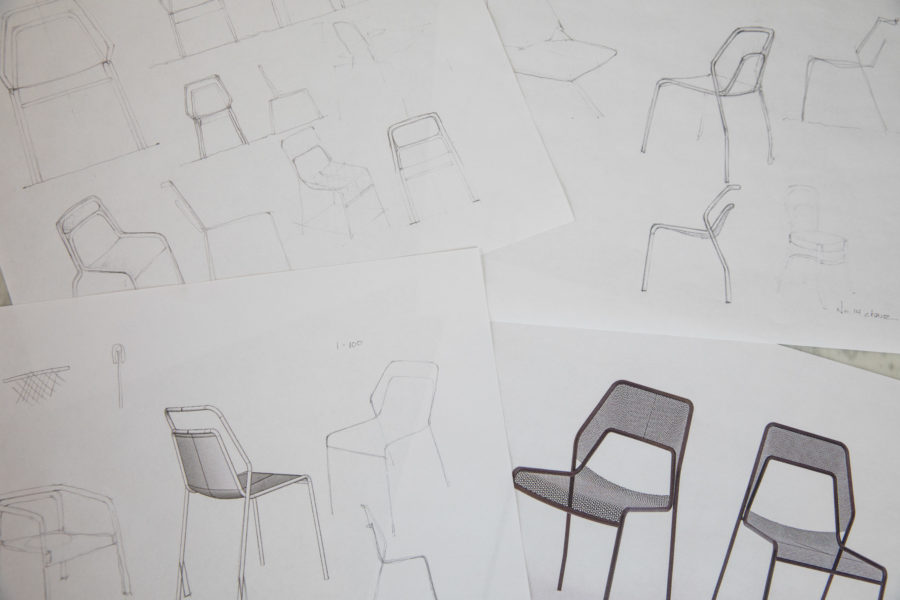 Two decades later that’s not too far off from how the company operates today, granted on a much larger scale. (They now communicate largely via email, not fax.) Keeping in step with its ethos, the brand forgoes commissioning big-name designers, opting instead for a hands-on, in-house team—many of whom started at Blu Dot as interns. Every Thursday, the design team, along with Christakos and Blanks and an engineering outfit, meet to workshop new products in various stages of the creative process, from sketches to prototypes to factory samples.

It can take a year or two to bring the initial concept to a final product. Take, for example, the Hot Mesh collection, whose origins lie in a plan to create a stackable indoor/outdoor chair. It took two years of brainstorming, discussion, and prototypes to land on the final product: a modern take on the Thonet chair with intricate perforated steel mesh. Its course goes from the design studio in Minneapolis to the factory in Italy where it’s produced.

Blu Dot’s designers are problem-solvers. “There’s a pragmatism that enters our process,” explains Christakos. Aesthetics are a priority, but design discussions go beyond that: Materiality, tooling, user- friendliness, cost, and shipping are also considered in depth. The ultimate goal is to create cool, modern, and pared-down pieces—but it’s not always easy. “Less is more difficult,” says Blanks. 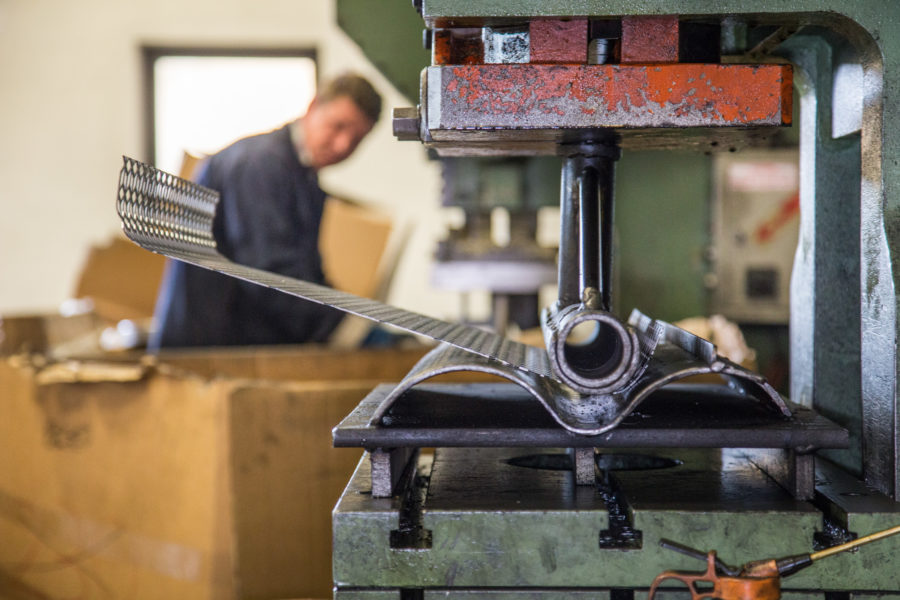 That proved true when designer Brad Bray led the Hot Mesh project. Like other products, it went through rounds of sketches, prototypes, and trial and error. Its various iterations explored different shapes, the use of positive and negative spaces, and interactions between the legs and chair back and seat. The mesh pattern was mocked up by using a neighbor’s laser machine to cut pieces of card stock. Ultimately—though it may not be apparent at first glance—it was a classic café chair that refined Bray’s ideas. “The Thonet chair has been around since the 1850s,” says Bray, “but it’s amazing how astronomically modern it is.”

Blu Dot works with craftspeople from around the world to bring designs to life. A small, family-owned factory in northern Italy that specializes in metalworking was tasked to manufacture the Hot Mesh collection, which includes a chair, lounge chair, ottoman, stools, and café and bar tables. 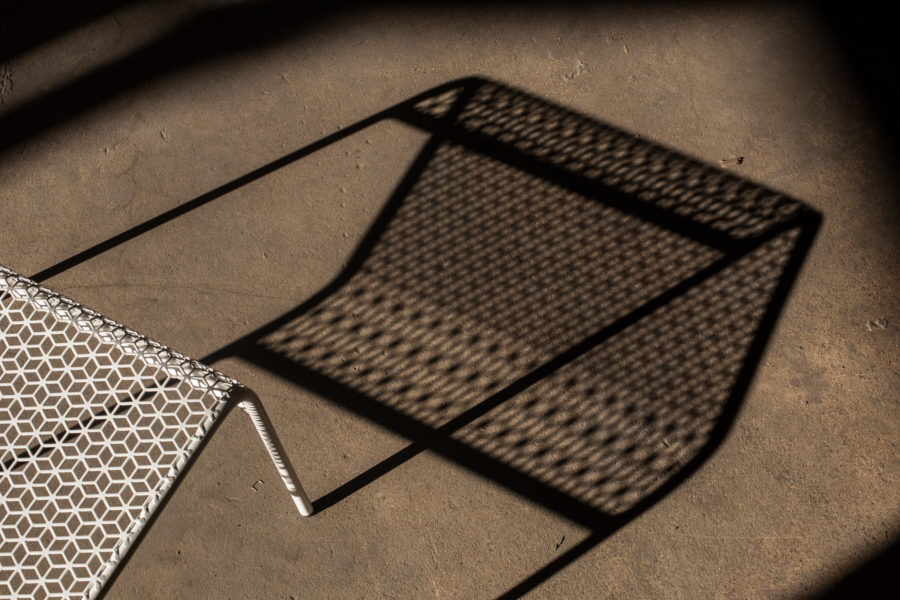 Like a hole punch, a machine cuts out pieces from a sheet of steel to create the custom mesh pattern. Separately, round metal tubes are bent to create the frame of the chair. The two elements are attached by a process called seam welding, which uses the pressure of two wheels combined with heat to create a clean joint. Other corners of the chair are welded by hand, then polished smooth.

The Hot Mesh chair gets its colors, many of which are bold and bright, from a powder coating. This serves both as an aesthetic element as well as a protective layer. A powder is applied to each chair, then heated to form a hard-wearing shell.

The chair will go on to sell in 20 countries, but the heart of Blu Dot lies in the Midwest. “This is all created in a little studio back in Minneapolis,” says Christakos.