VIDEO BY KRISHNA YALLA
PHOTOS BY ROY ROCHLIN
PRODUCED BY SURFACE STUDIOS IN PARTNERSHIP WITH NIKE April 19, 2017
Share
Back

At NikeLab’s 21M store in Manhattan’s SoHo neighborhood, Surface and Nike cohosted a conversation between Taiwanese architect, designer, and engineer Arthur Huang and editor-in-chief Spencer Bailey. Huang is the CEO and founder of Miniwiz, a company specializing in what he describes as “anti-disposability,” an effort to reuse trash and industrial waste to create products and architectural forms. Having worked with Nike on a wide range of projects—including the interiors of NikeLab stores around the world, as well as temporary structures such as the Aero-Static Dome in Milan, Area 13 in Taipei, and the Feather Pavilion in Beijing—Huang spoke about his many collaborations with the brand. Here, an edited and condensed version of the discussion.

When did you start thinking about architecture, design, and ultimately sustainability?

I mean everybody gets into design because they think they can change the world, right? Because if you design something pretty, you can make the world a better place. After I got into the engineering part, and the architecture part, then I got pretty mad at the inconsiderate nature of what you do to the world. In reality, we’re just creating more stuff without considering what materials we’re using. That’s when we realized: just focus on the material, because it can change everything else.

Sustainability has become a bastardized, overused word. For you, what does it really mean?

Sustainability is a definitely bastardized. It’s completely bullshit. I hear very famous architects say, “This is a green design,” and I get really frustrated, because they never consider the amount of crap that they’ve created in the production process. That’s part of our M.O.—we’re angry at the current design field, and that’s why we want to come up with our own way.

Is there another word you’d prefer? 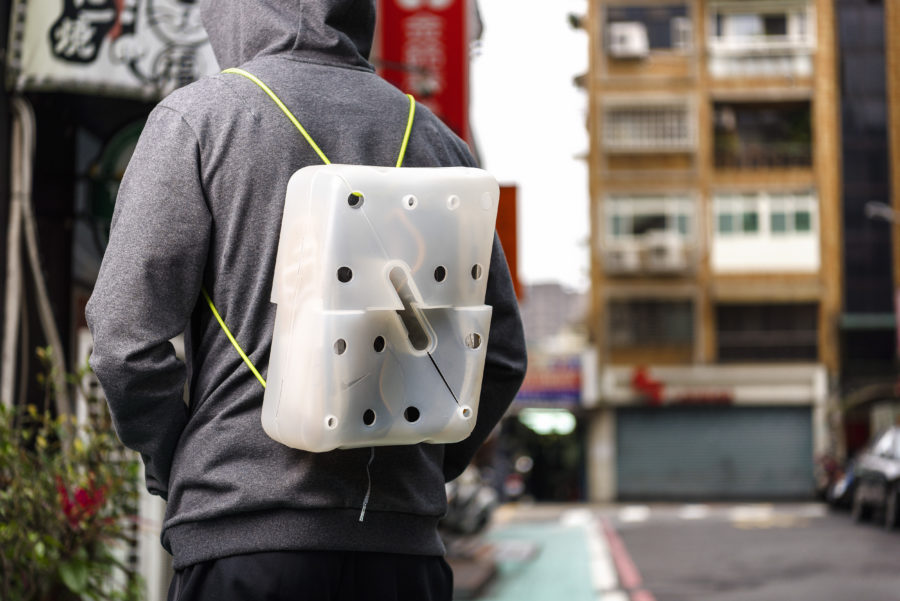 Right. And in your mind, what are the best practices to create something that could be considered “sustainable”?

Our thing is to always try to turn pollution into a solution or into a new product. When you create a product try to use a hundred percent recycled material. The second thing is you want to keep that material in an endless loop, which requires using a single material. It’s the holy grail for all product engineering to use one material that can be sustainably re-recycled constantly. And that is actually quite hard for most designers and material engineers, because you want a different feel, you want a different performance.

Is that how you approached the design of the box?

First of all, we used a hundred percent trash to create a new product. We also reduced the carbon footprint of the manufacturing process. And you want to also increase the lifespan of the product. We know that when you launch a shoe, you have a marketing event like this, and this time, we used the box as an installation. Those are the three things that we’ve always strived for—especially with this box.

Yeah, you can stack it—I imagine that has to do with shipping as well.

That’s one of the original concepts that we came up with for this box: you don’t need extra cartons to ship it. The second is to honor the original intent of Air Max, which was to minimize the carbon footprint, and use the most abundant material we have—air.

So who has the most power to make the world more green, the companies like Nike or the audience?

The companies, because they affect consumer behavior. Something that’s cool, that’s in, has to have a brand like Nike to back it up.