After six generations, the architect's signature work is heading towards completion—but the laying of the final stone will be as much a cause for celebration as the end of something rare and beautiful.

For over 130 years, Antoni Gaudí’s Temple Expiatori de la Sagrada Família—a hulking, Modernisme Roman Catholic basilica in Barcelona—has been under construction, a life-sized sneak-preview of what it could one day be. In a city full of Gaudí works—the snaking Park Güell, the iridescent Casa Batlló, the near-brutalist Casa Milà—its allure stands tallest, stemming as much from its form as it does from its permanently in-progress state. Surrounded by workers and cranes, it is truly a living, breathing piece of architecture.

It won’t be in-progress for much longer, though (theoretically). Over a century after the laying of its first stone, the Sagrada Família finally has an official green light for completion after the foundation managing its construction paid the city $41 million for all previous work which, fascinatingly, was done without a permit. After generations of starts, stops, and attacks by arsonists, it’s slated to finish in 2026, 100 years after the death of Gaudí, who committed his last 44 years to it.

The permit’s receipt marks, in a way, the beginning of the end. The open-ended lifespan of the process created a seemingly infinite temporal space within which the myth of the Sagrada Família came to overshadow its reality. For generations of Barcelonans and people around the world, it has been alive link between past and future—alive and unfinished then, as now, as tomorrow. I didn’t know my Spanish great-grandparents, but I do know that they, as I, saw the Sagrada Família being built. As the world changed around it, the fact of its non-completion, of its ongoing process, held true and constant; the Sagrada Família has remained still, yet in motion, caught in suspended time. 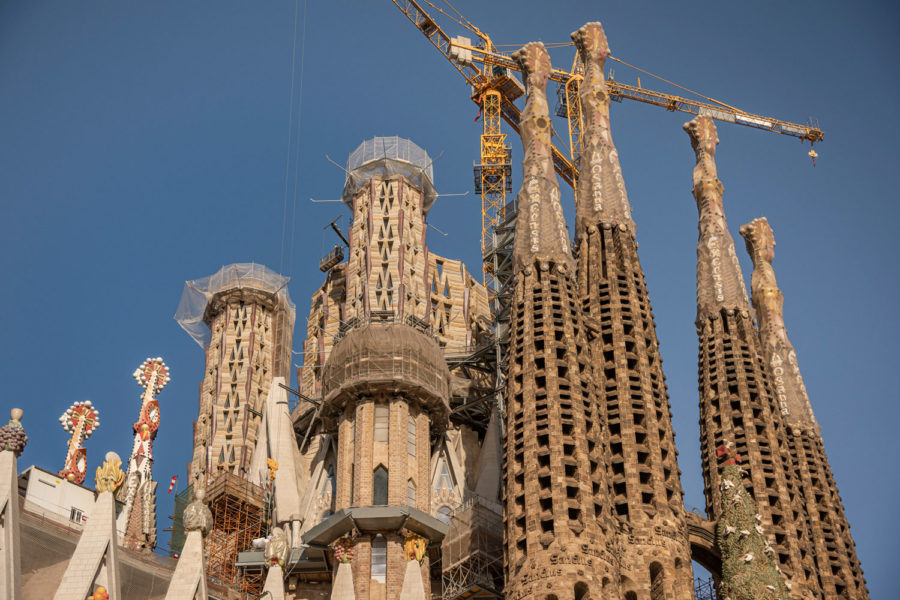 In that bubble of time, it has also come to represent an investment in the built environment to which we have grown unaccustomed: a no-holds-barred injection of resources into the cultivation of the public life and civic expression of a city. The Sagrada Família is a civic building first and a religious one second, giving, even unfinished, physical form to the cultural ethos of Barcelona. Its perpetual construction—the movement on the site, the slow but perceptible changes—served as a reminder of its key role in the city and the sometimes confounded ambitions of Barcelona.

As the end nears, how will Sagrada Família change? Will people flock to it to get a final glimpse of its in-progress state? Years from now, will photographs of the still-incomplete building become collectibles? How will the shift—from undone to done, from moving to static—change our valuing of the building and the city? Will it become, as its last piece is put in place, an instant relic?

Future generations won’t be a part of its history in the same way that we, and those before us, have been. Their relationship to Sagrada Família will be static; they won’t see themselves growing and evolving alongside it. Still, all those years won’t have been in vain. The Sagrada Família will be, finally, finished, and generations, maybe even civilizations, will inherit it, its history, and the investment of not just 150 years, but the better half of Gaudí’s life.

Seth Rogen Brings the World of Houseplant to an Airbnb

Hem Gets Playful With an Outdoor Chair, and Other News

An Evolving Vision for ICFF and WantedDesign, and...

Will Saudi Arabia’s Rebrand Be Successful?

London’s Ikoyi Pulls Up the Curtain on a New Home,...

A “Safe and Welcoming” NFT Marketplace for...

Of Course Telfar’s Wallets Sold Out Within Seconds,...

Delvaux Commemorates Its Own History with a Museum