On what was once a set of 19th-century French railroad tracks, Ho Chi Minh City's revamped Central Park will offer a vision of Vietnam’s architectural future and a reminder of its colonial past.

LAVA and ASPECT Studios have won a competition held by local officials in an effort to breathe new life into Ho Chi Minh City’s Central Park.

The firms will tag team on turning a dilapidated and underused park, which was fashioned from a colonial-era French railway station, into a world-class recreational space, featuring new playgrounds, sports zones, outdoor art galleries, theater pavilions, and a sunken garden, adding layers of greenery to the urban environment.

The site will also feature artificial trees which will collect and recycle rainwater to be used in watering plants, drinking fountains, and fire hydrants. Other types of artificial trees will control ventilation and provide fresh air, while others equipped with solar panels will supply clean energy for information screens, charging docks, and WiFi.

In another feat of futurism—and an homage to history—a new set of twisting, elevating walkways will connect all of these facilities and sights, ultimately culminating in a steel sculpture that will spiral towards the sky.

The walkways will also connect to an underground shopping center and Ben Thanh Metro Station which, upon its completion, will be the first subway station in Vietnam. The 107-year-old Ben Thanh Market also stands in the same area in District 1, where numerous world-class hotels, restaurants, and shopping malls have long uplifted the local and national economies. It’s only natural, then, that LAVA and ASPECT Studios set out to offer both looks to the past and looks ahead. “Our design references this history and future mobility,” says Chris Bosse, director of LAVA.

Bosse concludes with a promising note, “We were thrilled to win this competition and for the opportunity to create an authentic place to bridge the past and the future, a connection between man, nature and technology.” Construction will begin as soon as 2020. 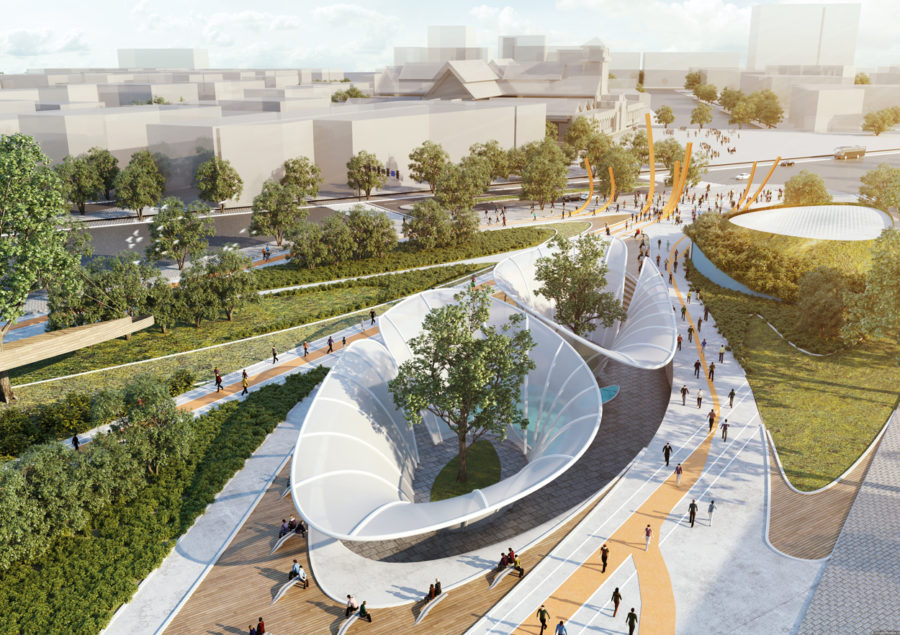 European Monuments Are Going Dark. Could It Be a Good...

Designer of the Day: Electric Bowery