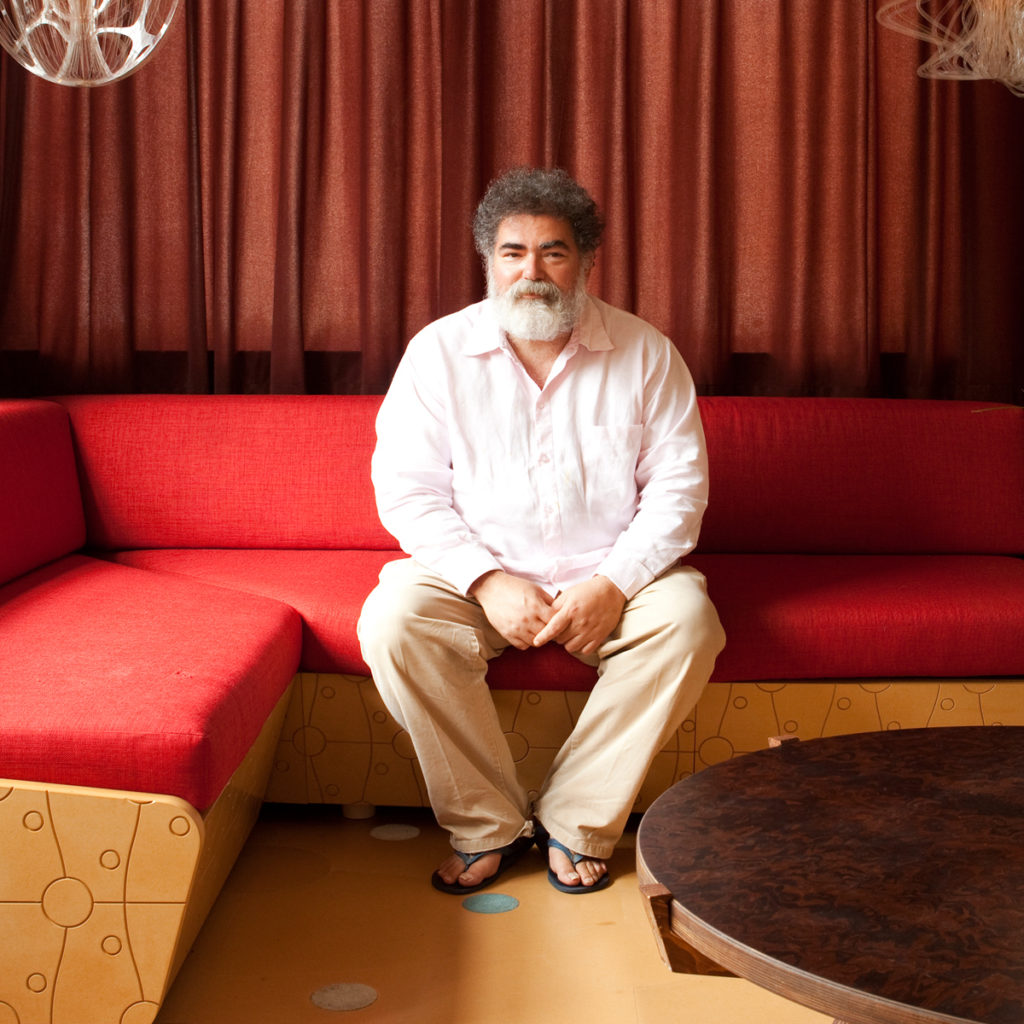 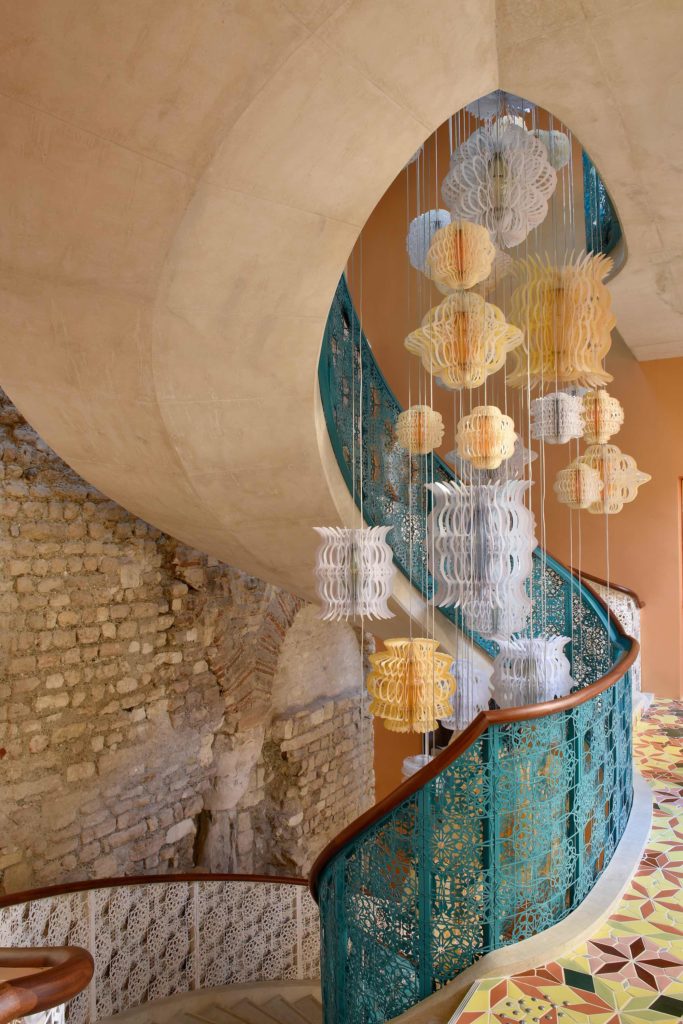 The details make all the difference at L'Arlatan. …
THE UTOPIA ISSUE

The artist's exploration into the intersections among design, painting, sculpture, and everyday objects has resulted in a colorful and enchanting style that stands out for its originality.

The artist's exploration into the intersections among design, painting, sculpture, and everyday objects has resulted in a colorful and enchanting style that stands out for its originality.

In 1990, Jorge Pardo staged his first solo exhibition, in a garage tucked into a West Hollywood alley, filling it with carefully crafted replicas of common tools: wrenches, a ladder, a splicer. But none of them worked. Even then, fresh out of graduate school, Pardo was challenging perceptions of fine art and functional objects. This project, and his subsequent work, exuberantly broke barriers between sculpture and design, form and function, art and life.

Eight years later, MOCA Los Angeles invited Pardo to mount a show. Instead, he built a home, opened it to the public, and then moved in. Most recently, the Cuban-American artist designed a hotel, L’Arlatan in Arles, France, swathed with 500 of his own paintings applied directly to doors and tables rather than walls.

New York’s Petzel Gallery recently showcased Pardo’s early work, spanning the late-1980s and 1990s. His sculptures and wall-mounts emphasize a natural inclination to subvert expectations about art, design, and lived space. And much like the rest of his oeuvre, they celebrate plurality. Assumptions, he seems to say, are ambiguous and constantly changing.

Here, we catch Pardo at his studio in Yucatán, Mexico, where he sheds light on his multidisciplinary, inquisitive practice.

Since the show features some of your earliest work, let’s start at the beginning. Was there an a-ha moment, when you knew you wanted to pursue art?

Susan Sensemann, my professor at the University of Illinois at Chicago, who worked with Roy Boyd in the 1980s, told me I should become a painter. I didn’t want a factory job, so I thought “I can keep this at bay by going to
college”—and I did. She always praised my work. I had no idea! I was just a kid floundering around. It was one of the first things I did that got positive feedback. It didn’t feel like work—it was fun.

Other than in grammar school, I’d never taken art. I grew up working-class—my parents never took me to a museum. It felt astounding that I could have a cultural/professional life that involved something I enjoyed, which was working with my hands.

Even then, were you experimenting with different mediums, or did that come later?

That came later. I always made things as a kid—my friends and I all had shops in our garages. On my 13th birthday, I asked for a table saw. I always thought that was just a hobby. I took some time to get there, but it helped me segue into art easily. Even my college paintings were constructions. I added things to the surface. I was never interested in drawing for the sake of drawing or painting for the sake of painting.

The work you made post-college, in the late-1980s and 1990s, continued to question art for art’s sake. What was it like to revisit those pieces for the Petzel show?

I liked going back to pinhole cameras, which I made out of ordinary things. One was made from a plastic owl—the kind you put in the garden to keep crows from eating your vegetables. I punctured it, put film inside, and stuck it in the kitchen when I was cooking one night. I had it take a picture—not of me, because the exposure is too slow—but of everything around me.

Pinhole cameras were my first works that contained a simple, eloquent, and beautiful structure for viewing the problems of objectivity and subjectivity. In other words, the [camera] is taking a picture of itself: It can’t really photograph anything other than what’s standing still, and all the activity that took place while this document was trying to be made can’t be captured. People don’t give a shit about photography anymore, but it was a really urgent issue at the time. Photographs were meant to capture what was once present, whereas I devised a way to photograph nothing.

Those works challenged traditional perceptions of art—where it should live, what it should accomplish. Your 1993 sculpture Refrigerator, also in the Petzel show, did that too.

Yes! The fridge belonged to Brian Butler, an art dealer who ran a gallery out of his house, and tapped me for a show with Rikrit Tiravanija, Sarah Seager, and Lincoln Tobier in the 1990s. I started turning his shit into art, so he had a fraught relationship between his collector and eggs (laughs). For another piece, I turned his kitchen into an edition, so there were always drawers and doors missing.

Problems are fodder for contemporary art—at least they should be. My work examines and upends odd things.

A few years later, you built an entire home, 4166 Sea View Lane, as an artwork. It blurred the lines between art and lived space even further. What inspired that project?

Refrigerator led me to examine how people live. Los Angeles lacked interesting museums, but had a specific sliver of architectural history: Southern California modernism. People lived in revolutionary houses, informed by Le Corbusier and Mies van der Rohe, with great indifference. These buildings had depth only rivalled by the film industry, which I used as a vehicle to look at history that was different from an artwork. At the same time, these objects governed artworks. The house is more important than the painting in the house, right?

You’ve continued to use architecture as a vehicle to upend expectations about art and design, and to dissolve boundaries between art and life. One of your most recent projects, L’Arlatan hotel, does that too.

It’s a strangely beautiful hotel filled with around 500 paintings, but they’re on doors and tables, not walls. I’m interested in asking: Where is art supposed to stop? It’s almost impossible to control where that motion starts and stops. From a maker’s perspective, architecture is very complicated—it takes years to produce anything. For instance, you might spend two days trying to figure out plumbing and then ask yourself, “Is it still art?”

I think so, but then it doesn’t matter anymore. •