A Furniture Collection Immortalized in Stone

One of creative icon Karl Lagerfeld’s most impressive contributions to design makes its stateside debut in New York during Fashion Week.

One of creative icon Karl Lagerfeld’s most impressive contributions to design makes its stateside debut in New York during Fashion Week.

While partnering on the ultra-lavish four-year renovation of Paris’ Hotel de Crillon, which reopened in 2017, Karl Lagerfeld had expressed his love for antiquity to the architect of the Crillon project, Aline Asmar d’Amman. Known for her affinity toward handcrafted materials and ability to merge innovative techniques with traditional designs, d’Amman had brought on Lagerfeld to design a pair of “Grands Appartements” within the 18th-century building, where one of the standout elements was a bathtub carved from a single chunk of marble weighing two tons.

“A couple of years later, Karl proposed to develop an entire body of work as a tribute to Greek beauty,” explains the Beirut-born architect, who works between her home country and Paris. “I was thrilled to go on another creative adventure alongside the genius.” Thus, Lagerfeld created the collection of 13 pieces as an assortment of functional sculptures evoking a modern Grecian aesthetic, and d’Amman worked to develop the pieces based on his drawings and directions, carrying out the studies and the development of the works. The name of the collection, “Architectures,” is a reference to this being the first time the multi-faceted designer ever created such an expansive and specific collection of pieces similar to the way an architect would curate them.

From the circular pedestal fountain to the five-legged asymmetrical table, each piece borrows elements of tradition merged with modern details—think table legs recalling Doric columns—as simple and refined as varying concentric carvings that decorate the circular marble border of a mirror. A floor lamp combines a Dan Flavin–like tube resting in a perfectly modest, cropped-column marble base. Each piece is a knockout and sold in a limited edition of eight, plus four artist proofs. All are made in Italy from a white Arabescato Fantastico marble with dark gray veins or a black Nero Marquina marble with creamy white veins.

“The pieces are a rare balance of modern and classic. The boldness of their presence and the timeless feeling is a result of Karl’s genius eye and intuitive creativity,” D’Amman says. “The proportions are unique as they result from the use of the golden ratio, a perfect Greek mathematical equation found in the pen stroke of the great master. It’s also about the unique craftsmanship and the rarity of the marbles used with Karl’s distinctive black and white signature.”

The collection first debuted in Paris in October 2018 before Lagerfeld’s passing the following February. Now, the pieces are on view at the Carpenters Workshop Gallery in New York, where they will hold a museum-worthy exhibit this fall. “Each piece has a presence so strong it would ‘make’ an entire room,” d’Amman notes. “It’s all about the allure, attitude, and proportion. Karl incarnated modern elegance with each of his creations in every field.” 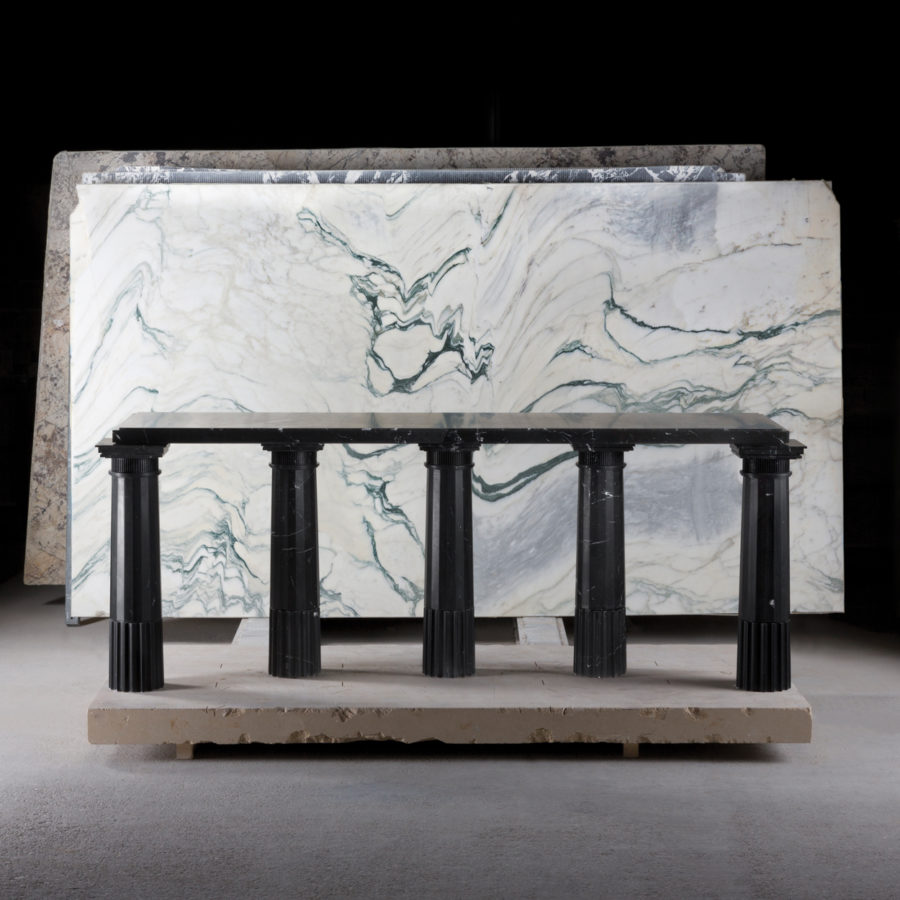 A Fashionable Cannabis Dispensary Debuts in The...

Designer of the Day: Ivo Bisignano

Designer of the Day: Ashlynn Park

See the Star-Studded Lineup for the Surface x NTWRK...

Designer of the Day: Caroline Zimbalist

Herman Miller Is Merging With Knoll For $1.8 Billion