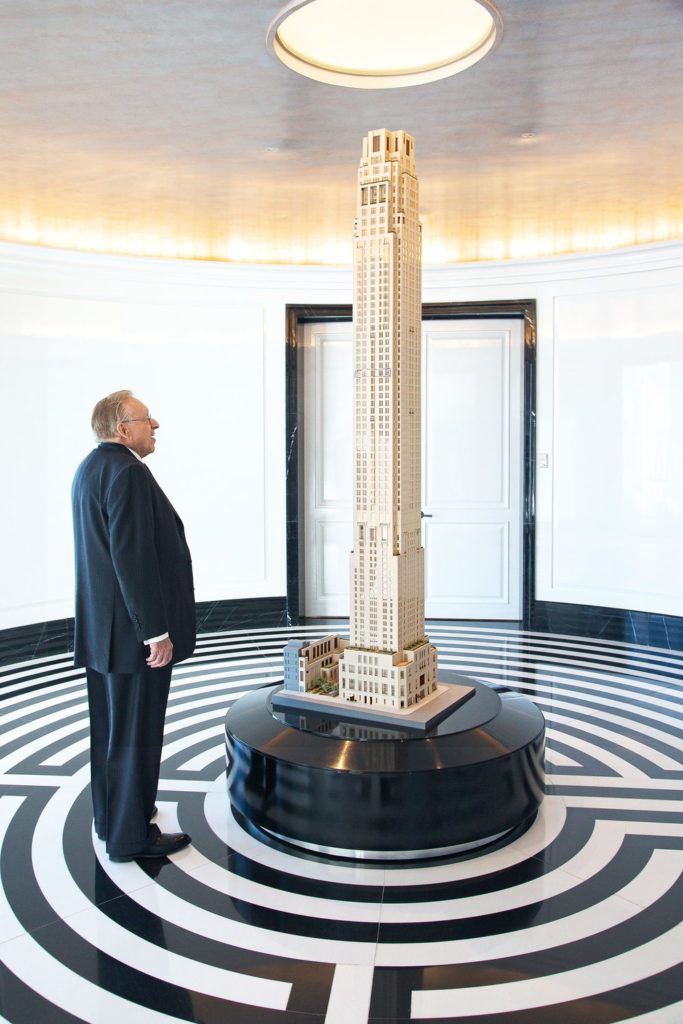 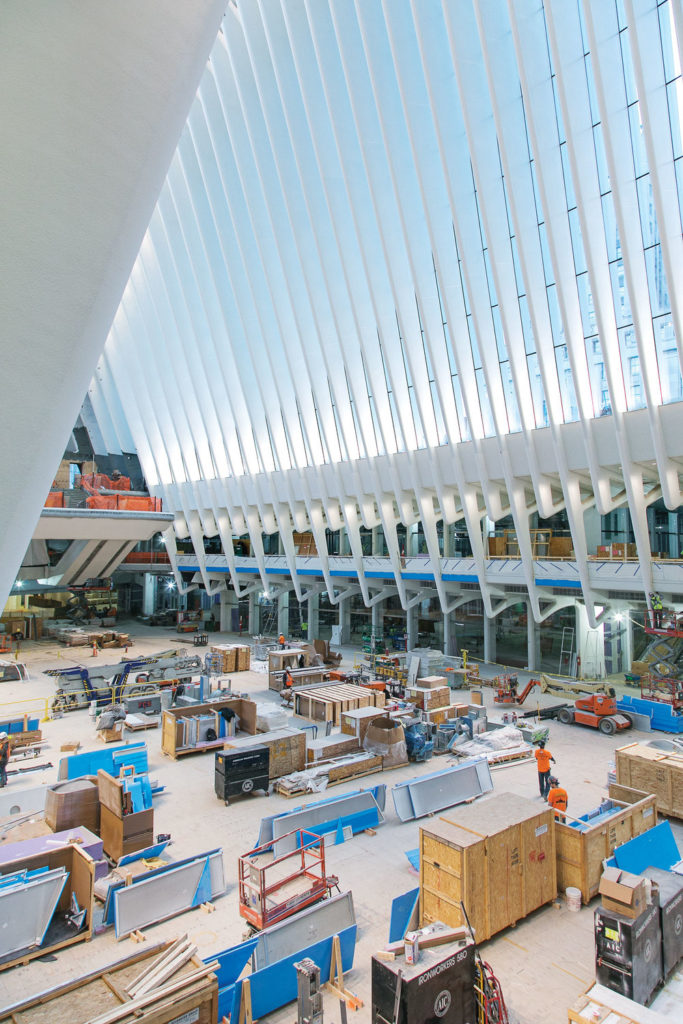 Larry Silverstein Writes His Own History

How the New York City developer is collaborating with leading artists and architects to rebuild the World Trade Center the right way.

How the New York City developer is collaborating with leading artists and architects to rebuild the World Trade Center the right way.

On the 19th anniversary of 9/11, Surface takes a look back at its 2016 interview with Larry Silverstein, the developer behind the World Trade Center and its surrounding beauty.

What happened to Building 7? Conspiracy nuts have been asking this question since the terrorist attacks of Sept. 11 left approximately 2,750 people dead and turned a group of gargantuan office buildings at New York’s World Trade Center—including Building 7—into a pile of toxic dust. The answer is simple: It collapsed. And in 2006, Larry A. Silverstein rebuilt it. He’s rebuilding the entire World Trade Center, in fact, to which he holds the lease, and he’s tapped some of the world’s greatest architectural and artistic minds to make it happen.

It starts with David Childs, chairman emeritus of Skidmore, Owings & Merrill (SOM), who is responsible for the new 7 WTC, the biggest tenant of which is Moody’s, as well as the recently completed 1 WTC, which is, among many other things, Condé Nast’s new headquarters.

Then there are Pritzker Prize bon vivants like Richard Rogers (3 WTC), Fumihiko Maki (4 WTC), and Norman Foster (2 WTC—or the initial plans for it, at least); Polish-American sentimentalist Daniel Libeskind (WTC master plan); New York classicist Robert A.M. Stern (30 Park Place, a 926-foot luxury residence tower and Four Seasons hotel just up the street from the Trade Center); and Denmark’s star export Bjarke Ingels (2 WTC—after Foster lost the commission). Conceptual artist Jenny Holzer, known for her large-scale installations, created a massive piece for 7’s lobby that is a functional sculpture, in that it’s pretty to look at, but doubles as a blast shield against explosions.

Silverstein has also consulted on peripheral projects like the much-debated, long-awaited transit hub by Spanish architect Santiago Calatrava. It’s an impressive stable he’s built for himself, something that seems to have been overshadowed by other details of one of the city’s most highly politicized real estate developments.

For those who have avoided reading business sections since the dot-com bubble—or haven’t received their 9/11 Truther starter pack—Silverstein, 84, is the elegantly besuited, tightly-coifed founder of Silverstein Properties. He has been a fixture in the world of New York real estate since he bought his first building in 1957. His evolution to new-build developer came when the Emery Roth–designed 7 World Trade Center was completed in 1986. He entered the stratum of power player when he signed a historic 99-year lease on the World Trade Center in July 2001 for $3.2 billion. But six weeks later, it was destroyed during an event that changed not only the course of Silverstein’s life, but diverted the course of human history indefinitely.

In architecture critic Paul Goldberger’s book Up From Zero (2004), about the herculean trial of rebuilding the Trade Center, he succinctly sums up Silverstein’s legacy prior to his acquisition of the World Trade Center. “His greatest professional pleasure lay in the making of deals,” Goldberger writes, “and like many of his colleagues in the real-estate industry he tended to see buildings less in terms of their architectural design than in terms of their cash flow. It was not surprising, then, that Silverstein was known more for the success of his business than for the specific buildings that he owned.”

The New York Times has an online archive of all stories related to Silverstein dating back to Feb. 1985. Reporter Charles Bagli has written about his various exploits since the lease transfer in 2001, which has made Silverstein into his de facto beat. “He’d bought a bunch of buildings,” Bagli said, referring to Silverstein’s long career before the Trade Center acquisition. “He’d been well-regarded in the real estate industry, but virtually unknown to the public.”

Then who is Larry Silverstein? There isn’t one answer. He’s viewed as a hard-nosed businessman on the rational end of the spectrum, and a Sept. 11 conspirator in cahoots with the Israeli and United States governments on the you-gotta-be-kidding-me, tin-foil-hat end. (There’s a ludicrous 43-second video on YouTube—one of many—called “Larry Silverstein And How Jews Did 9-11.”) “Every time I mention Silverstein in a story, I receive these vile anti-Semitic diatribes,” Bagli says. “Delete!” He’s been analyzed by critics and the public so often, his motives questioned at every turn, and with such sundry findings, he’s as much a builder as a modern day Hedda Gabler, albeit with a better tailor. “He defines tenacious,” Bagli adds. “He has stuck through it.”

Okay, but how does a man who supposedly cares so much about the bottom line, come to assemble such an incredible pantheon of creatives to help build his towers? There’s a story there.

On a balmy New York winter day, I met with Silverstein at his office on the 38th floor of 7 World Trade Center, which he thinks of as a prototype of sorts for every subsequent building that goes up on the 16-acre plot. It was the first building to go up after the attacks because unlike with the twin towers, there was no loss of life when the building came down. State-of-the-art security, built-to-last construction techniques, and stunning vitreous architecture are the three boxes that must be checked before breaking ground on a new project.

His office is a sight to behold. The room is long and voluminous, but because Silverstein sits next to the door, it’s easy to miss it all. He sits at his desk, beyond massive twin doors that open and close at the touch of a button on his desk. Another button raises a hatch beyond his computer screen. When it’s open, a woman pops her head in and Silverstein requests something in his inimitable low, raspy voice.

“You want something to drink?” he asks me, with the lady in the hatch waiting at attention. “Water? Coffee?”

“I’d love a coffee,” I say, as I take a seat at a round conference table next to his desk.

She disappears and the hatch door lowers. My order arrives a few minutes later, as Silverstein is just starting to go into a seemingly planned soliloquy about how he developed his world-class taste for art and architecture.

“I think back to a number of events that shape me,” he begins, “and I think the one that had the greatest impact on me as a developer was building the original 7 World Trade Center.”

“I had acquired the site from the Port Authority in 1980. At that point I was 49 years of age. I designed a building the purpose of which was to give the opportunity to produce a large amount of affordable space.”

“It was a very large building with 47,000-square-foot floors, which were trapezoidal in shape. The building was about 48 stories in height. Two million square feet of space. And as I built it, I fell in love with Carmen red granite as a facade material. It has this rich reddish quality to it with black elements. It was quarried in Finland and shipped to Italy where it was cut. The conclusion of it all was the building was covered in this stone.”

“It was so beautiful that I decided to use the stone at the entrance, the lobby, the toilets. When the lobby was finished I walked in and said, ‘Oh my god! It’s a mausoleum.’ I called my wife [Klara] to come down and see. She said, ‘It’s a mausoleum!’”

“She suggested finding some contemporary art to lighten it up. Al Held paintings, for instance, have lots of color and context and are quite beautiful. I looked at them and thought they would bring intensity to the space. My wife concurred. So let’s get the biggest one he’s got, I said. I had a very big wall to fill: 20 feet by 15 feet in height. It was perfect.”

Silverstein then mentions as an aside sculptures by Louise Nevelson and Alexander Calder, all lent by the Port Authority.

“The paintings made the lobby come to life. It was not a mausoleum anymore. It became a point of excitement,” he says. “Unfortunately, 9/11 brought the building down, and every one of the paintings was destroyed.”

“Anything I was going to do in the future had to be completely different from what I’d done at the original 7 WTC.”

He says of the World Trade Center he envisions, “It will be a series of buildings that are first class. Not just from an architectural standpoint, but from [those of] safety and sustainability.” In other words, bomb-proof and beautiful.

It’s a wonder to think that a shade of Finnish marble catalyzed one of the greatest assemblies of architects and artists in history. Another story for the Silverstein legacy files in an already hefty canon. But as Charles Bagli reminds: “There is a tremendous desire to write your own version of history.”