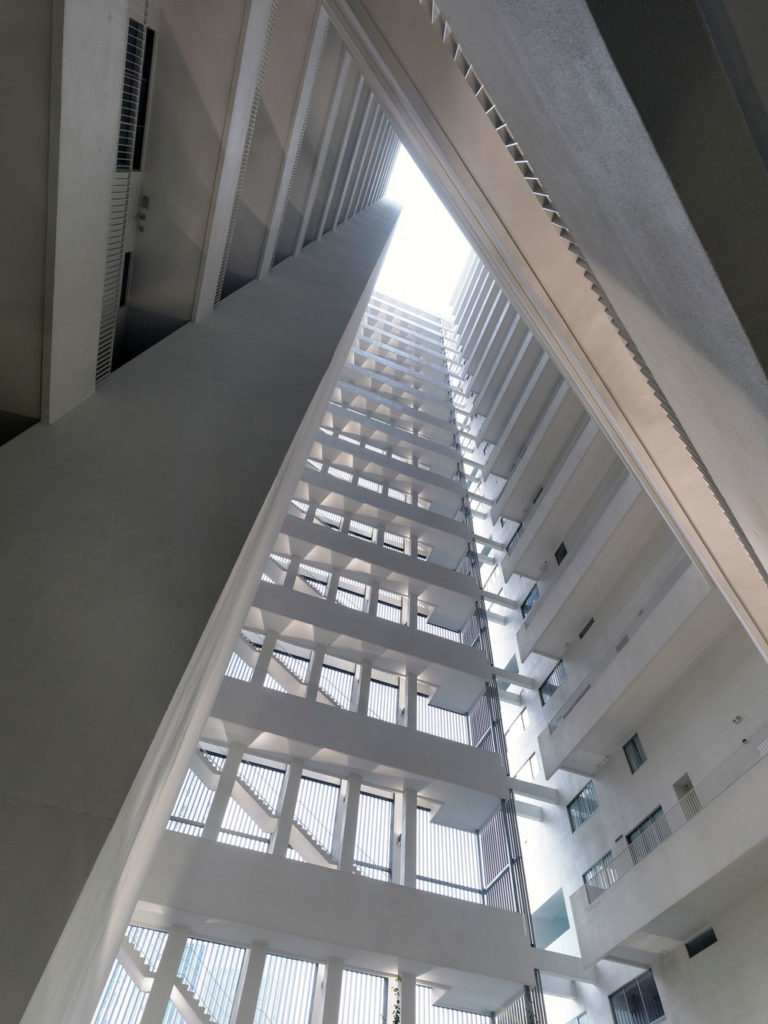 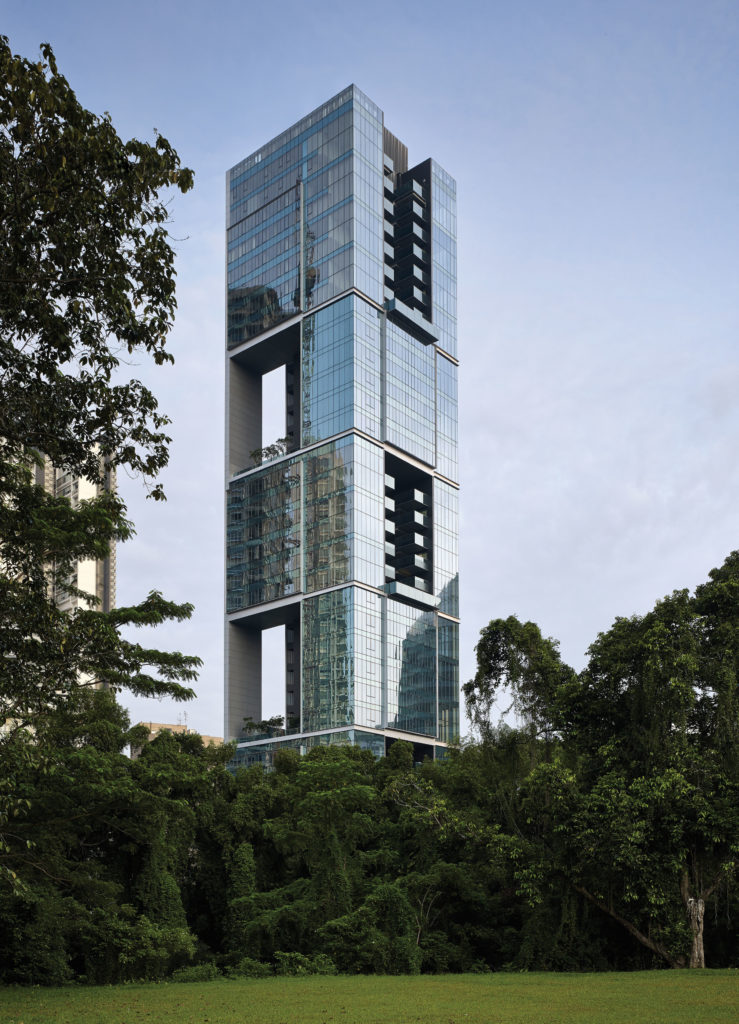 The exterior of One KL Singapore's Twenty One Anguilla Park condo. …
Architecture

Can you bottle a lifestyle? What would it smell like? Those are the vexing questions architect Soo K. Chan, theprincipal of Singapore-based SCDA Architects, builder of dazzling skyscrapers and immense cultural venues, is grappling with when he speaks to me over the phone from Milan. “I don’t have a particularly good nose, but my wife does,” Chan says.

As an East Asian architect, Chan’s name doesn’t ring out in the West the way some others do. His relative anonymity can be explained by his Asia-heavy commissions, but a survey of his portfolio affirms that he measures up to regional heavyweights like Tadao Ando, SANAA, and Shigeru Ban. Since starting SCDA in 1995, the Malaysian-born Yale graduate has earned two Royal Institute of British Architects awards and Singapore’s President Design Award. His work on a range of projects, from high rises to luxury resorts to the National Design Centre in Singapore, has won praise for its palpable human touch. American hotelier Ian Schrager has taken notice of Chan’s hospitality concepts such as the W Seminyak Bali and Park Hyatt Maldives, which celebrated indigenous architecture by eschewing cut-and-paste tropical design, and enlisted him to take the reigns on three upcoming Edition hotels. The first, located in the southern Chinese beach town Sanya, is slated to be completed this year.

Which brings us back to smells: The aroma he and his wife, Ling, are experimenting with is for their lifestyle brand, Soori. (The name is a mashup of Soo and Sri, her Indonesian name.) “Between us we cover a wide spectrum of design,” says Ling, who launched a handbag line called llora a few years ago. Her role at the company is primarily on the production and sourcing side, but she says, “I’m also quite attuned to the softer aspects of interior design.” That scope is evident in their catalogue, which includes a furniture line by Poliform, the Alila Villas Soori hotel in Bali, and now, Soori High Line, a resort-inspired residential building in New York’s Chelsea neighborhood. “Soori is the essence of crafted luxury,” Chan says. He sees it as the epitomy of an upscale international lifestyle that puts an emphasis on customization. “It’s for the person who travels and is into design.”

Chan, 54, has long strived to bring a distinctive voice to global design. His style, dubbed “neo-tropical,” speaks with a vernacular that stands out for its holistic sensibility: the blurred lines between indoors and outdoors; a focus on what he calls “the void,” or negative space; the use of water as a pillar of his aesthetic; and a devout conviction that architecture connect to local culture. It’s a perspective he developed while growing up in a complex of traditional clan houses in Penang, Malaysia, a corner of the world notable for its proximity to the sea and rainforest climate.

“I remember the sound of the rainwater hitting the hard granite floors,” he says, “the water coming through and momentarily filling up the sunken court before draining away. The smell of fresh rain as the water evaporated stays with me—that kind of experience, being close to nature, is what I try to bring to the work.” The home’s layout—long, dark, and narrow with a large central courtyard where ancestral shrines were displayed—still informs his creative process today. “Cut-out airwells would allow light, air, and rain in. The quality of graduated dark and lightness changed throughout the day due to the sun’s direction.”

One of the most pronounced references to this form is at Alilas Villas. The fluidity of the open-air spaces allows natural light to flood through and offers water views from just about any vantage point on the property, whether it’s a tiered fountain or the Indian Ocean. The 48 villas open to ensuite pools and sequestered courtyards. The location on a working paddy field meant incorporating an irrigation system into the layout. “Bali is a very spiritual place,” he says. “The approach was to create a truly sustainable design in accordance to the century-old rice farming laws that also allows for religious processional routes to temples through the resort.”

The soft-spoken architect’s momentum coincides with personal growth that only comes with time and experience. “Over the years, Soo has refined his vision; I’ve noticed a clarity and consistency in his design,” Ling says. “He’s developed a confidence in how he works.” 2016 feels like an inflection point for Chan, both in the evolution of his self-styled label and the beginning of a new chapter in his career. More than two decades after moving to Singapore, Chan is bringing neo-tropical to New York with a triumvirate of new residential buildings.

There’s the $70 million 515 Highline, a 12-unit condo along the eponymous raised park, which features a wavy facade with glass fins that resemble a rippling ocean. A vast exterior “art wall” will display rotating installations for strolling-by visitors.

Across the street, the 31-unit Soori High Line doesn’t evoke water through its design, it utilizes the real thing—16 of the apartments are outfitted with stunning private lap pools that are integrated into the living areas. A year-round heating system allows each one to function through winter, even the edge that is exposed to the elements. Their purpose, however, has a more significant meaning than simply providing a place to a take a swim. It traces back to Chan’s childhood. “I don’t think of a pool as a pool,” he says. “It’s a water body that’s interlocked into the space. It brings a piece of nature and a sense of tranquility into the house.”

Lastly, there’s 118 East 59th Street, whose glassy, stacked-box exterior echos a slightly disheveled tower of cassette tapes, two blocks north of Midtown’s Billionaire’s Row. He was commissioned by Chinaese developer Euro Properties Group, who like Chan, will be making its New York debut. “We share many of the same design philosophies,” says chief executive Neo Que Yau. “Soo puts such care into the intricacies of geometry, materials, and color schemes.”

There’s little doubt Chan will bring a fresh voice to the U.S. But will it translate?

“One of the riches of New York is that it’s a city of many voices and styles,” says Deborah Burke, the Manhattan-based architect and newly appointed dean at the Yale School of Architecture. “Soo Chan’s building on the High Line will be a wonderful and elegant part of the city’s incredibly built chorus.”

If all goes according to plan, it will have a new olfactory aspect, too. “Translating what’s in your mind is difficult,” Chan says. “Much harder than designing a container.” As for lifestyle and its scent: Malaysian rainwater apparently hits all the right notes.